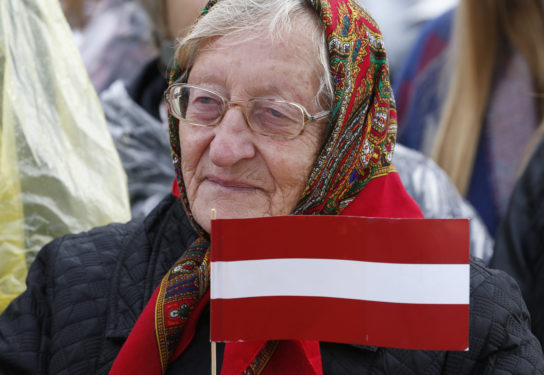 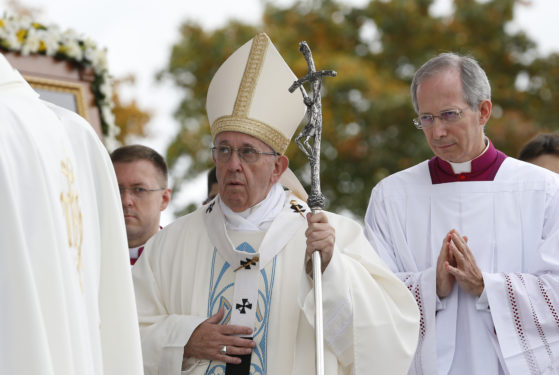 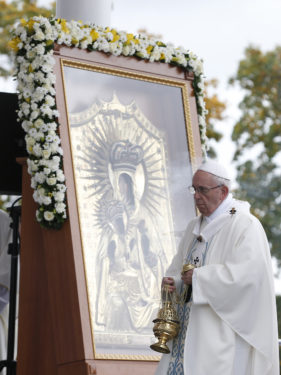 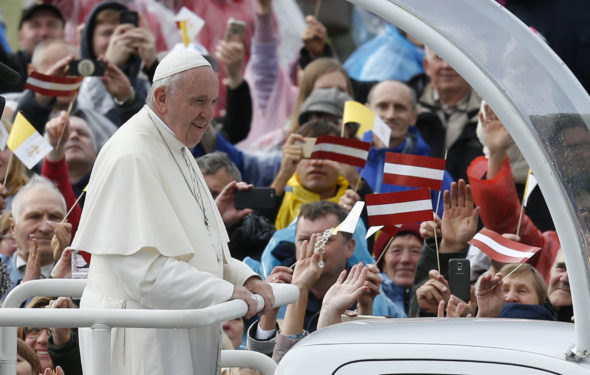 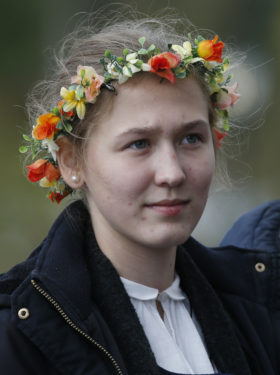 AGLONA, Latvia (CNS) – What would Mary do? That was the question Pope Francis, in effect, asked Latvian Catholics gathered at their nation’s popular Marian shrine.

Celebrating Mass Sept. 24 at the Basilica of the Assumption, a shrine holding a beloved icon of the Mother of God in Aglona, 60 miles from the Russian border, Pope Francis insisted Marian devotion was about more than just pilgrimages; it means imitating Mary by staying close to those who suffer, acknowledging situations of injustice, forgiving offenses and promoting reconciliation.

In a country that experienced 50 years of Soviet domination and that remains fiercely proud of its re-conquered independence, members of Latvia’s large Russian minority have struggled to obtain citizenship rights, and many claim they still face discrimination. Russian speakers make up about a quarter of the population.

Pope Francis spent the day in Latvia as part of a visit Sept. 22-25 to the Baltic nations. The country declared a holiday in connection with his visit and that, combined with his early morning arrival and cold rainy weather, meant there were few people on the streets of Riga.

But thousands gathered later in the city center to watch Pope Francis and President Raimonds Vejonis lay flowers at the Freedom Monument, a towering memorial to Latvia’s independence. The sculpture, dedicated in 1935, was a source of irritation to the Soviets once they annexed Latvia after World War II, but every plan to destroy the monument was put on hold out of concern for the social unrest it would provoke.

The centerpiece of Pope Francis’ morning in Riga was an ecumenical prayer service in the city’s Lutheran cathedral. Lutherans, Catholics and Orthodox each account for between 18 percent and 25 percent of the country’s population.

Praising ecumenical cooperation in the country, the pope urged Latvians to be on the lookout for an attitude toward faith that would treat it more as “a curio from the past, a tourist attraction, a museum piece” than a living faith that inspires a person’s daily actions and approach to life.

At a prayer service accompanied by the sweet tones of a girls’ choir, Pope Francis said: “If the music of the Gospel ceases to resonate in our very being, we will lose the joy born of compassion, the tender love born of trust, the capacity for reconciliation that has its source in our knowledge that we have been forgiven and sent forth.”

A variety of factors, including increasing secularism, pose challenges to Christian faith and action in the world, the pope said, but they must not lead to a “closed and defensive mentality.”

“If Christ deemed us worthy to live in these times, at this hour – the only hour we have – we cannot let ourselves be overcome by fear, nor allow this time to pass without living it fully with joyful fidelity.”

Immediately after the ecumenical meeting, Pope Francis went to the Catholic St. James Cathedral for prayer and a brief meeting with older men and women, who, the pope said, witnessed “the horror of war, then political repression, persecution and exile,” including to Siberia.

“Neither the Nazi regime nor the Soviet regime could extinguish the faith in your hearts,” Pope Francis told the elders, who fought and suffered for freedom.

Yet, he said, now that Latvia is free and the market economy is growing, the elderly face “solitude, abandonment, lack of assistance, social exclusion and even poverty.”

“If that is the case,” he said, “then the so-called train of freedom and progress has ended up with the very people who fought to gain those rights as its last car, onlookers at other people’s party, honored in words but forgotten in daily life.”

Reaching the small town of Aglona after a helicopter ride from the capital, Pope Francis drew special attention to Mary at the foot of the cross and Mary as she is seen in the “Magnificat,” her song of praise of God in response to the angel Gabriel’s news that she would bear Jesus.

“The Mighty One has done great things for me, and holy is his name,” she says, according to the Gospel of St. Luke. “He has thrown down the rulers from their thrones but lifted up the lowly. The hungry he has filled with good things; the rich he has sent away empty.”

Today, the pope said in his homily at the Basilica of the Assumption, Mary “stands near those who suffer, those from whom the world flees, including those who have been put on trial, condemned by all, deported.”

The consequences of faith in people’s lives cannot be just a memory of the saints and heroes of the past, he told them.

Being like Mary in closeness to the oppressed cannot mean “engaging in a kind of ‘tourism of solidarity,’” Pope Francis said. Instead, it means consoling people, helping them up and staying with them until they are steady on their feet.

“Harmony is always difficult when we are different, when our differences of age, life experiences and circumstances lead us to feel, think and act in ways that, at first sight, seem opposed,” he said. But faith in one God means recognizing others as brothers and sisters.