Meeting with Authorities, the Civil Society and the Diplomatic Corps Speech of the Holy Father

Madam President,
Members of the Government of the Republic and of the Diplomatic Corps,
Representatives of Civil Society,
Distinguished Authorities,
Ladies and Gentlemen, 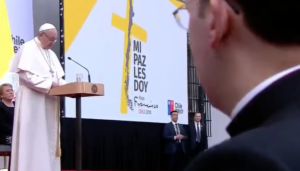 It is a joy for me to stand once again on Latin American soil and begin this visit to Chile, this land so close to my heart, which welcomed and schooled me in my younger years. I would like my time with you also to be a moment of gratitude for that welcome. I think of a stanza of your national anthem: “How pure, Chile, are your blue skies / How pure the breezes that sweep across you / And your countryside embroidered with flowers / Is the very image of Eden”. It is a true song of praise for this land, so full of promises and challenges, but especially of hope for the future.

Thank you, Madam President, for your words of welcome. Through you, I would like to greet and embrace all the Chilean people, from the extreme northern region of Arica and Parinacota to the southern archipelago with its “riot of peninsulas and canals”.[1] Their rich geographical diversity gives us a glimpse of the rich cultural polyphony that is also their characteristic feature.

I am grateful for the presence of the members of the Government, the Presidents of the Senate, the Chamber of Deputies and the Supreme Court, as well as the other state authorities and their officials. I greet the President-elect, Mr Sebastián Piñera Echenique, who recently received the mandate of the Chilean people to govern the country for the next four years.

Chile has distinguished itself in recent decades by the growth of a democracy that has enabled steady progress. The recent political elections were a demonstration of the solidity and civic maturity that you have achieved, which takes on particular significance in this year marking the two-hundredth anniversary of the declaration of independence. That was a particularly important moment, for it shaped your destiny as a people founded on freedom and law, one that has faced moments of turmoil, at times painful, yet succeeded in surmounting them. In this way, you have been able to consolidate and confirm the dream of your founding fathers.

In this regard, I remember the emblematic words of Cardinal Silva Henríquez’s in a Te Deum homily: “We – all of us – are builders of the most beautiful work: our homeland. The earthly homeland that prefigures and prepares the (heavenly) homeland that has no borders. That homeland does not begin today, with us; but it cannot grow and bear fruit without us. That is why we received it with respect, with gratitude, as a task begun many years ago, as a legacy that inspires in us both pride and commitment”.[2]

Each new generation must take up the struggles and attainments of past generations, while setting its own sights even higher. Goodness, together with love, justice and solidarity, are not achieved once and for all; they have to be realized each day. It is not possible to settle for what was achieved in the past and complacently enjoy it, as if we could somehow ignore the fact that many of our brothers and sisters still endure situations of injustice that none of us can ignore.

Yours is a great and exciting challenge: to continue working to make this democracy, as your forebears dreamed, beyond its formal aspects, a true place of encounter for all. To make it a place where everyone, without exception, feels called to join in building a house, a family and a nation. A place, a house and a family called Chile: generous and welcoming, enamoured of her history, committed to social harmony in the present, and looking forward with hope to the future. Here we do well to recall the words of Saint Alberto Hurtado: “A nation, more than its borders, more than its land, its mountain ranges, its seas, more than its language or its traditions, is a mission to be fulfilled”.[3] It is a future. And that future depends in large part on the ability of its people and leaders to listen.

The ability to listen proves most important in this nation, whose ethnic, cultural and historical diversity must be preserved from all partisan spirit or attempts at domination, and inspire instead our innate ability to replace narrow ideologies with a healthy concern for the common good (which without being communitarian will never be a good). It is necessary to listen: to listen to the unemployed, who cannot support the present, much less the future of their families. To listen to the native peoples, often forgotten, whose rights and culture need to be protected lest that part of this nation’s identity and richness be lost. To listen to the migrants who knock on the doors of this country in search of a better life, but also with the strength and the hope of helping to build a better future for all. To listen to young people and their desire for greater opportunities, especially in education, so that they can take active part in building the Chile they dream of, while at the same time shielding them from the scourge of drugs that rob the best part of their lives. To listen to the elderly with their much-needed wisdom and their particular needs. We cannot abandon them. To listen to children who look out on the world with eyes full of amazement and innocence, and expect from us concrete answers for a dignified future. Here I feel bound to express my pain and shame at the irreparable damage caused to children by some ministers of the Church. I am one with my brother bishops, for it is right to ask for forgiveness and make every effort to support the victims, even as we commit ourselves to ensuring that such things do not happen again.

With this ability to listen, we are invited – especially today – to give preferential attention to our common home: to foster a culture that can care for the earth, and thus is not content with merely responding to grave ecological and environmental problems as they arise. This calls for boldly adopting “a distinctive way of looking at things, a way of thinking, policies, an educational programme, a lifestyle and a spirituality which together generate resistance to the assault of the technocratic paradigm”[4] that allows powerful economic interests to prevail over natural ecosystems and, as a result, the common good of our peoples. The wisdom of the native peoples can contribute greatly to this. From them we can learn that a people that turns its back on the land, and everything and everyone on it, will never experience real development. Chile’s possesses a deep-rooted wisdom capable of helping to transcend a merely consumerist view of life and to adopt a sage attitude to the future.

The Chilean soul is a vocation to being, a stubborn will to exist.[5] It is a vocation to which all are summoned, and from which no one should feel excluded or unneeded. A vocation that demands a radical option for life, especially in all those forms in which it is threatened.

I thank you once more for the invitation to come among you and to encounter the soul of this people. I pray that Our Lady of Mount Carmel, Mother and Queen of Chile, will continue to accompany and bring to birth the dreams of this blessed nation.