I thank God for allowing me to visit this beautiful part of our continent, the Araucanía. It is a land blessed by the Creator with immense and fertile green fields, with forests full of impressive araucarias – the fifth “praise” offered by Gabriela Mistral to this Chilean land[1] – and with its majestic snow-capped volcanoes, its lakes and rivers full of life. This landscape lifts us up to God, and it is easy to see his hand in every creature. Many generations of men and women have loved this land with fervent gratitude. Here I would like to pause and greet in a special way the members of the Mapuche people, as well as the other indigenous peoples who dwell in these southern lands: the Rapanui (from Easter Island), the Aymara, the Quechua and the Atacameños, and many others.

Seen through the eyes of tourists, this land will thrill us as we pass through it, but if we put our ear to the ground, we will hear it sing: “Arauco has a sorrow that cannot be silenced, the injustices of centuries that everyone sees taking place”.[2]

In the context of thanksgiving for this land and its people, but also of sorrow and pain, we celebrate this Eucharist. We do so in this Maqueue aerodrome, which was the site of grave violations of human rights. We offer this Mass for all those who suffered and died, and for those who daily bear the burden of those many injustices. The sacrifice of Jesus on the cross bears all the sin and pain of our peoples, in order to redeem it.

One of the main temptations we need to resist is that of confusing unity with uniformity. Jesus does not ask his Father that all may be equal, identical, for unity is not meant to neutralize or silence differences. Unity is not an idol or the result of forced integration; it is not a harmony bought at the price of leaving some people on the fringes. The richness of a land is born precisely from the desire of each of its parts to share its wisdom with others. Unity can never be a stifling uniformity imposed by the powerful, or a segregation that does not value the goodness of others. The unity sought and offered by Jesus acknowledges what each people and each culture are called to contribute to this land of blessings. Unity is a reconciled diversity, for it will not allow personal or community wrongs to be perpetrated in its name. We need the riches that each people has to offer, and we must abandon the notion that there are higher or lower cultures. A beautiful “chamal” requires weavers who know the art of blending the different materials and colours, who spend time with each element and each stage of the work. That process can be imitated industrially, but everyone will recognize a machine-made garment. The art of unity requires true artisans who know how to harmonize differences in the “design” of towns, roads, squares and landscapes. It is not “desk art”, or paperwork; it is a craft demanding attention and understanding. That is the source of its beauty, but also of its resistance to the passage of time and to whatever storms may come its way.

The unity that our people need requires that we listen to one another, but even more importantly, that we esteem one another. “This is not just about being better informed about others, but rather about reaping what the Spirit has sown in them”.[3] This sets us on the path of solidarity as a means of weaving unity, a means of building history. The solidarity that makes us say: We need one another, and our differences so that this land can remain beautiful! It is the only weapon we have against the “deforestation” of hope. That is why we pray: Lord, make us artisans of unity.

2. The weapons of unity.

If unity is to be built on esteem and solidarity, then we cannot accept any means of attaining it. There are two kinds of violence that, rather than encouraging the growth of unity and reconciliation, actually threaten them. First, we have to be on our guard against coming up with “elegant” agreements that will never be put into practice. Nice words, detailed plans – necessary as these are – but, when unimplemented, end up “erasing with the elbow, what was written by the hand”. This is one kind of violence, because it frustrates hope.

In the second place, we have to insist that a culture of mutual esteem may not be based on acts of violence and destruction that end up taking human lives. You cannot assert yourself by destroying others, because this only leads to more violence and division. Violence begets violence, destruction increases fragmentation and separation. Violence eventually makes a most just cause into a lie. That is why we say “no to destructive violence” in either of its two forms.

Those two approaches are like the lava of a volcano that wipes out and burns everything in its path, leaving in its wake only barrenness and desolation. Let us instead seek the path of active non-violence, “as a style of politics for peace”.[4] Let us seek, and never tire of seeking, dialogue for the sake of unity. That is why we cry out: Lord, make us artisans of your unity.

All of us, to a certain extent, are people of the earth (cf. Gen 2:7). All of us are called to “the good life” (Küme Mongen), as the ancestral wisdom of the Mapuche people reminds us. How far we have to go, and how much we still have to learn! Küme Mongen, a deep yearning that not only rises up from our hearts, but resounds like a loud cry, like a song, in all creation. Therefore, brothers and sisters, for the children of this earth, for the children of their children, let us say with Jesus to the Father: may we too be one; make us artisans of unity. 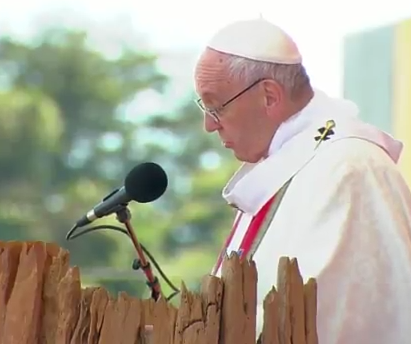