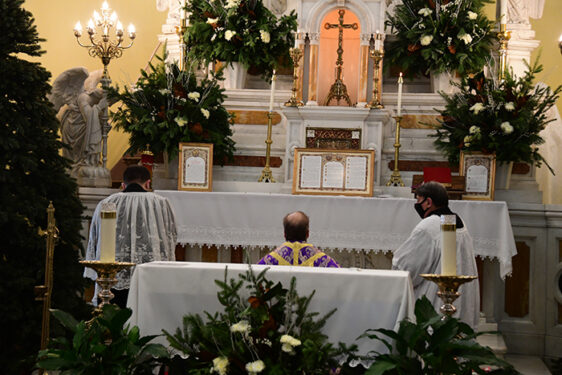 The Holy Father, Pope Francis, issued a Motu Proprio (a document issued by the Pope himself which has a legal effect in the Church) on July 16, 2021, called “Traditionis Custodes” (The “Guardians of the Tradition”). The Apostolic Letter limited the celebration of the Mass according to the Roman Missal of Pope John XXIII of 1962. Pope Saint John Paul II and Pope Emeritus Benedict XVI had allowed the use of the older ritual for those who were “attached to the older forms” of the liturgy in order to facilitate and promote unity in the Church.

Why? There is certainly so much good that has come from the celebration of what was known as the “Extraordinary Form” of the Mass. Many people, individuals, and families continue to benefit spiritually from the celebration of the older form of the liturgy. There is great beauty in it and the Mass nourished generations of Christians including many saints. Why would Pope Francis limit its celebration?

The answer is summed up in one word: unity, the very reason Pope Saint John Paul and Pope Benedict allowed its continued use in the first place. In his first letter to the Corinthians, Saint Paul said: “I urge you, brothers, in the name of our Lord Jesus Christ, that all of you agree in what you say, and that there be no divisions among you, but that you be united in the same mind and in the same purpose” (1 Cor. 1:10). Our unity in Jesus Christ must be lived and experienced by the Church.

If the liturgy of the Mass is the highest expression of who we are as Catholics, then that must be evident in our celebration. Not necessarily in the way the liturgy is celebrated (there are, in fact, several liturgies in the Church — East and West) but in the experience of it. However, the Mass of Pope St. Paul VI, the Novus Ordo, is, as Pope Francis states, the unique expression of the liturgy of the Latin Rite of the Catholic Church, and in celebrating it we are called to be one in the Lord.

The Second Vatican Council called the liturgy of the Church the “Source and the Summit” of all the Church’s activity. The Council Fathers put it this way: “The liturgy is the summit toward which the activity of the Church is directed; at the same time, it is the font [or source] from which all her power ﬂows” (SC, No. 10). It is obvious that the celebration of the liturgy is at the very heart of who we are as Catholics. Among the various liturgies of the Church, the celebration of the Mass is the highest form of the expression of our Faith, our most important prayer.

During that same Council, the liturgy of the Church was reformed, and the celebration of the Mass was changed in many ways, allowing a greater participation by the faithful in the sacred liturgy. This was accomplished through some significant adaptations, not least of which was that the liturgy was to be celebrated in the vernacular, that is, the languages spoken by the people rather than in Latin.

What was the problem with the celebration of the older forms of the rites? In some instances, certain people used the older form of the liturgy as something to hide behind. Refusing to accept the teaching of the Second Vatican Council, some people did not accept the legitimacy of the new Mass (the Novus Ordo). This caused disunity among the People of God. To create greater unity in the Church, the unity that Saint Paul urges us to live, the Holy Father is asking us to gather as the Church in prayer through the liturgy. We are the one Body of Christ. As the living Body of Church, we all lift our praise to God in the liturgy of the Mass, the sacrifice of Christ, together celebrating the salvation we have in Christ Jesus.

Rather than seeing the issuance of the new legislation on the liturgy as a limitation, we can look at it as an opportunity for everyone to examine our attitudes towards the celebration of the Mass and its importance in our lives as we come out of the pandemic when our participation was severely limited.

It is an opportunity for everyone to understand the history of the liturgy and to learn better how beautiful and dignified celebration is essential. It is a chance for us all to gather as a community of faith in our parishes and together lift up our great “Thanksgiving” to God our Father in the Eucharist, as one people to celebrate and partake of the one bread, “Because the loaf of bread is one, we, though many, are one body, for we all partake of the one loaf” (1 Cor 10:17).

Click here to read Bishop DiMarzio’s letter
about the Celebration of the Extraordinary Form of the Mass.

Msgr. Steven Aguggia is chancellor of the diocese and the pastor of St. Pancras, Glendale.