This week, we have commemorated the anniversary of the terrorist attack on America on Sept. 11, 2001. That day is etched in the memory of all people in the United States, most especially the people of the New York, Washington, D.C., and Pennsylvania metropolitan regions who experienced firsthand that terrible day in our history. We cannot erase from our memories the horrific recollections of that day. However, we can learn from those experiences that no matter how great was the tragedy which we experienced, the resiliency of our faith enables us to come back and to become stronger from such a terrible experience.

It is of great importance that, during the upcoming visit of Pope Francis to New York, our Holy Father will go to the National September 11 Memorial where he will take part in an inter-religious service calling upon the world to redouble its efforts for peace. Later in the day, he will speak at the United Nations and address the Seventh Session of the General Assembly. We can only surmise what he will say, echoing the words of Pope Paul VI when he said, “Never again war, never again war! It is peace, peace, that has to guide the destiny of the nations of all mankind!”

I am sure that Pope Francis will bring the same message to the leaders of the world. Currently, the situations of lack of peace throughout the world touch our hearts and bring our attention to peace making that is so necessary in the world today. In the heartrending situation in the Middle East and the millions of refugees it has produced, through ethnic conflicts in Asia and to terrorist operations in Africa, we are keenly aware that our world lacks peace and that we desperately need peace to bring order to chaos in our world today. 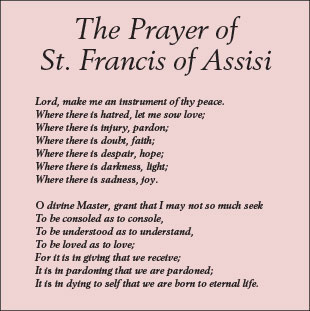 Pope Francis is clearly an instrument to God’s peace in the world. Just as the prayer attributed to St. Francis, himself, in which he pleads that he be made an instrument of peace, so is Pope Francis as he tries to bring a message of peace and reconciliation to a troubled world. The moral strength of the papacy is one that must be used for good in the world. As he emphasized in his Encyclical Letter, “Laudato Si’, On the Care for Our Common Home,” we recognize that human ecology is the most important aspect for what the Church teaches. We must become the champions of our own future and that of our children and grandchildren, and generations to come. Let us make the world a safer place, a place which can sustain life and make our lives to be healthier in the process.

Last week, our DeSales Media Group, under the direction of Msgr. Kieran Harrington, unveiled a gigantic mural on the side of a building facing Madison Square Garden. This larger-than-life-size mural of a smiling Pope Francis welcomes the Holy Father and invites us to tune into our Catholic cable channel, NET-TV, for 24-hour coverage of the Pope’s trip to the United States. As Msgr. Harrington said, “We wanted to get the word out so that people could hear the Holy Father in his own words, and not through the filter of the secular press.”

Sometimes the press can refract or concentrate on the Pope’s message in ways different from what was his intent. However, if we hear for ourselves what the Holy Father said, truly our experience could be more satisfying.

The Holy Father will be in the Diocese of Brooklyn briefly on two occasions during his visit; first when we welcome him to New York City when his plane lands at Kennedy Airport on Sept. 24th, and then when we bid him farewell on Sept. 26th, as he departs Kennedy Airport for the World Meeting of Families in Philadelphia. It is my plan to remind the Holy Father that when he is in the Diocese here in Brooklyn and Queens, he is in the periphery of New York City when he lands in Queens. We are what is called the “Outer Boroughs.” But truly we form the strength of the City of New York. We are the bedroom communities of Manhattan, but the heart of the City of New York. Here the people live and make our City stronger by the presence of so many good families.

The World Meeting of Families in Philadelphia is exactly about strengthening the family to be a support system for a world that craves peace, starting with the family and moving out to the rest of society to the international scene. Families can support one another by sharing what they know about family life; by caring for one another and by becoming examples of the Family of Nazareth in the world today.

As our Holy Father will put out into the deep in his visit to our country. We welcome him and sustain him with our prayers, anxiously awaiting the special messages he will have for those who wish to listen to his moral and religious leadership.