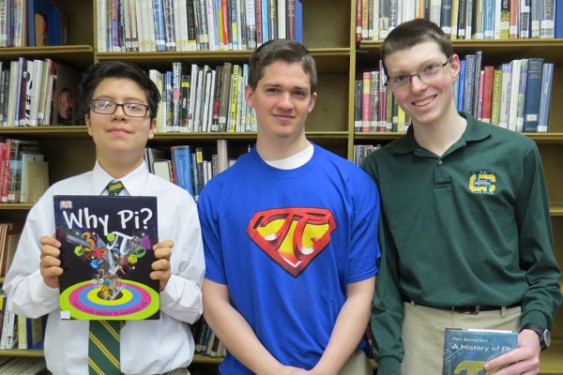 Students from Holy Cross H.S., Flushing, celebrated National Pi Day on Friday, March 13, with a competition to see who could recite from memory the most digits of this infinite number that expresses the ratio of the circumference to the diameter of a circle.

Pi, the 16th letter of the Greek alphabet, is represented by the symbol π. Since it is a constant, the numerical value of Pi is typically rounded off to 3.14159, hence March 14 is considered Pi Day. The concept of Pi has been explored throughout history from biblical times to the present and its value has been calculated to over 51 billion decimal places.

This symbol has spawned t-shirts, movies, books, fan clubs and even websites with chat rooms. There are numerous tips on how to memorize the digits and those who do are ranked according to the number of digits they can recall.

The winner of the Pi contest at Holy Cross was senior Kurt Gollerstepper who broke the existing record of 500 digits with 506 digits memorized. Freshman Kevin Rivera placed second with 302 digits and senior John Flynn placed third with 210 digits.