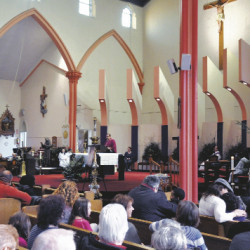 Holy Name of Jesus parish has begun a fundraising campaign to pay for renovations that will “restore its church to its former beauty.”

Father James Cunningham, administrator, announced at all Masses Feb. 24 that the parish has embarked on a drive to raise $1.5 million to make the necessary renovations to the church’s interior.

Ever since the church underwent a redesign to accommodate the post-Vatican II liturgy, there has been significant dissatisfaction with how it turned out.

“Parishioners have had some strong feelings about how the church looks,” said Father Cunningham. “The renovations that took place in 1981 were never really well received. People were not thrilled about how it looked, and they’ve been complaining for more than 30 years.”

Of particular concern has been a series of columns surrounding the altar of sacrifice, referred to by many as “inverted hockey sticks.” Also lacking support has been the “Pepto-Bismol pink” color used to paint sections of the church.

The renovations will include more seating with restored pews from either Our Lady of Loreto Church, East New York, or St. Ignatius Church, Crown Heights. New air conditioning also will be included as well new floor tiles in the sanctuary and rugs in the aisles. The tabernacle will be returned to the center of the church on the main altar. New lighting will be installed. Stained-glass windows from the former convent will be incorporated into the design.

The rose window facing Prospect Park West will be restored, and the statues in the outdoor grotto in front of the church will be replaced.

To kick off the campaign, statues of St. Joseph and the Blessed Mother from the “new” side altars and the large, ornate brass crucifix from the main altar are on display at Holy Name. An extensive set of photos and designs is being shown so that parishioners can get a close-up look at the plans for the renovations.

Father Cunningham said that the initial reaction has been very enthusiastic with more than $600,000 already pledged by only 30 donors in the week prior to the official announcement.

The church will close from the end of July through Christmas for the work to be completed. Masses will be celebrated in the parish’s Shepherd’s Hall. Nearby St. Saviour’s and Immaculate Heart of Mary churches will be available for funerals and weddings.

Nick Sisto, chairman of the parish buildings committee, said that the parish hopes to involve as many current and former parishioners as possible.

Information materials have been sent to all registered parishioners. Father Cunningham said that an outreach to past parishioners is underway through the Facebook page titled “Holy Name Restoration.”

“Everyone wants to do something,” said Father Cunningham. “Holy Name is in the people’s blood. Many families who helped found this parish are still in the neighborhood today.

“We have begun a new chapter in the history of Holy Name of Jesus.”

h, which is observing the 135th anniversary of its founding, has named the campaign “Fulfilling Our Vision.” The fundraising is being assisted by the Lynch Development Associates, while the design and building aspects are under the direction of Baker Liturgical Art.

One thought on “Parishioners Await ‘New Church’ at Holy Name”