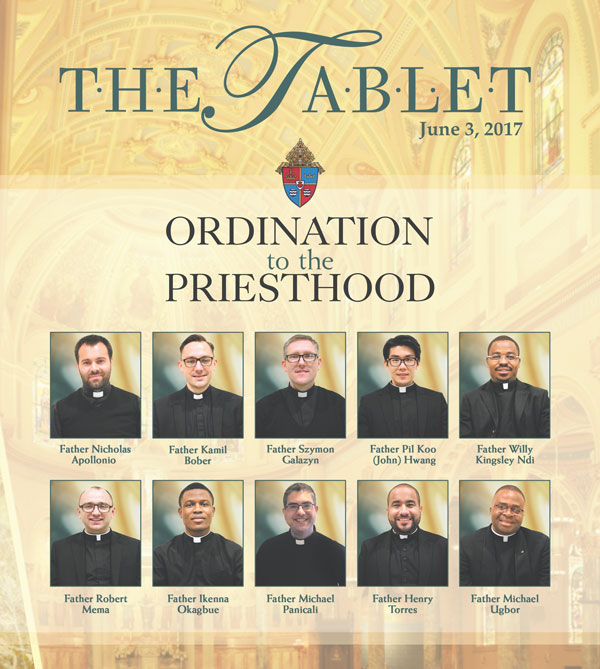 Bishop Nicholas DiMarzio will ordain 10 men to the priesthood for the Diocese of Brooklyn at St. Joseph’s Co-Cathedral, Prospect Heights, on Saturday, June 3, at 11 a.m.

The average age of the ordinands is 33 years. Three were born in Brooklyn. Two come from Poland and two from Nigeria. One was born in Korea, Cameroon and Italy.

They come from various backgrounds. One played in a rock band and hopes to rely on the power of music in his ministry. One was a social worker. One, a mapmaker. Another, a bricklayer.

The diocesan network New Evangelization Television (NET TV) will provide live coverage of the Ordination Mass, which will also be live streamed on www.netny.tv. NET TV is a cable network featuring news and information with a Catholic point of view, and is available in the New York area on Time Warner Cable, Channel 97; Cablevision, Channel 30; and Channel 48 on Verizon FiOS On Demand.

Below are brief biographies of the ordinands with details of their roads to the priesthood and plans for their First Masses of thanksgiving. The pieces were written by Tablet reporters Marie Elena Giossi and Antonina Zielinska.

New Priests Come in All Ages, From All Backgrounds

Related: On Their Way to the Priesthood – Bishop DiMarzio Ordains Eight Transitional Deacons