Kayla Mullin dreams of a day she can swim and fish in the Gowanus Canal. The eight-year-old and her grandfather, Eddie, both parishioners at Our Lady of Peace Church, were among two-dozen Brooklynites who gathered to bless the waterway on Earth Day, April 22.

“Welcome, my sisters and brothers, to what we believe is the first-ever blessing of the Gowanus Canal,” announced Father Brian Jordan, O.F.M., chaplain of St. Francis College, Brooklyn Heights. 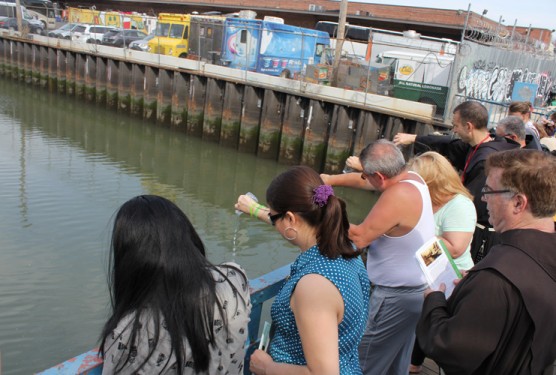 Father Jordan organized the event with the college’s campus ministry department and environmental club, the Franciscan Brothers of Brooklyn, local Franciscan Friars and Sisters and Our Lady of Peace parish.

The blessing was inspired by Pope Francis’ encyclical “Laudato Si’, On Care For Our Common Home” and St. Francis of Assisi, patron of ecology.

Standing on the Carroll Street Bridge, participants offered prayers, reflections and hymns before pouring small bottles of holy water over the blue railing.

As the final drops trickled into one of the nation’s most contaminated waterways, Father Patrick Boyle, O.F.M., pastor of Our Lady of Peace, asked God to send forth His Spirit upon the waters of the canal “to restore them to their natural beauty and wealth.”

Margaret Vollaro, a resident for 78 years, recalls a time when the canal “was nice, very beautiful.

“We had crabs running in here. But now,” her voice trailed off and she shook her head. 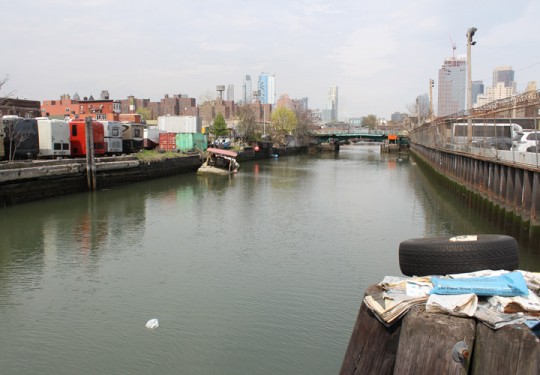 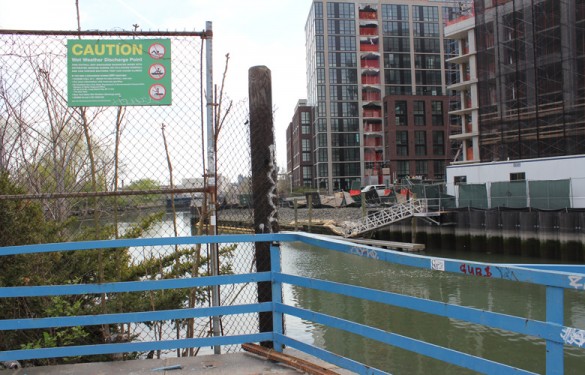 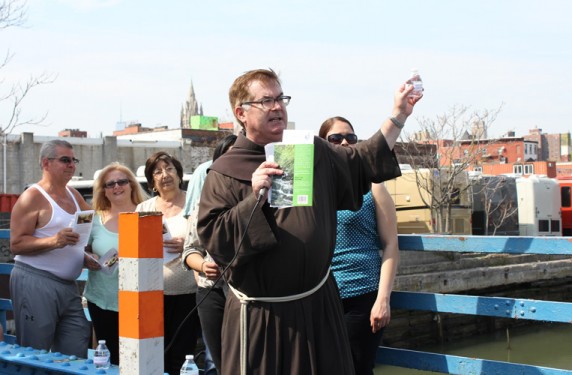 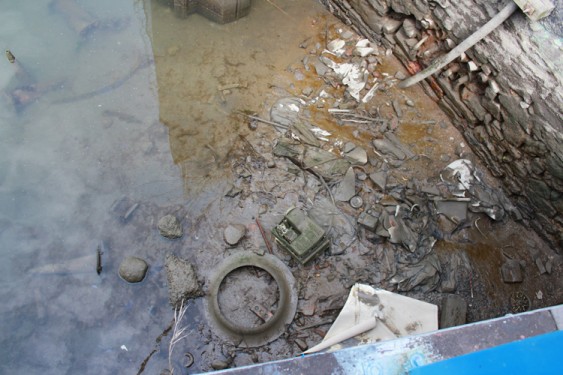 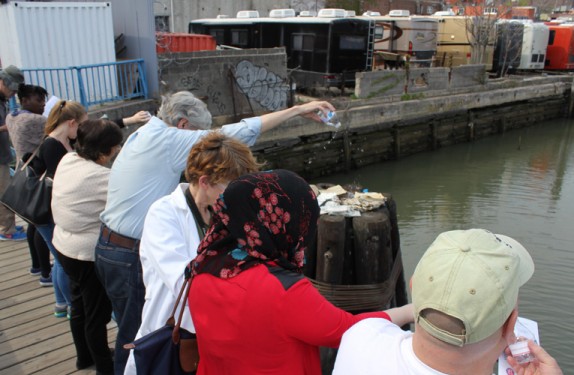 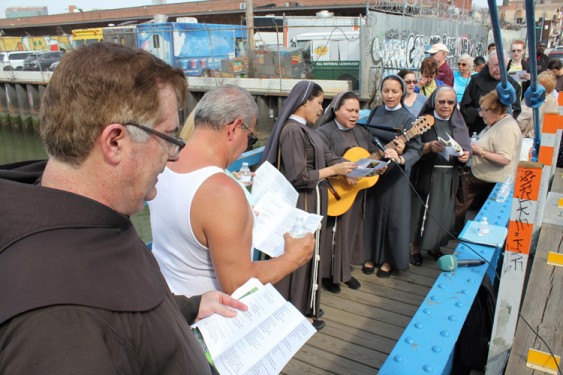 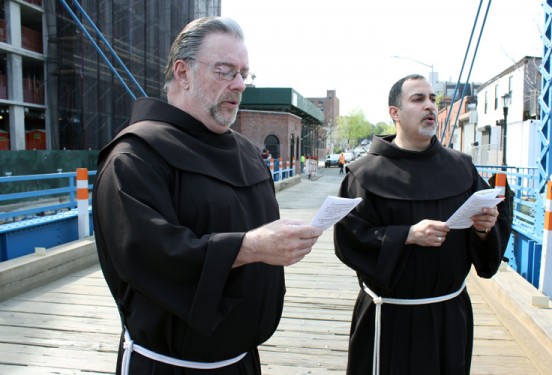 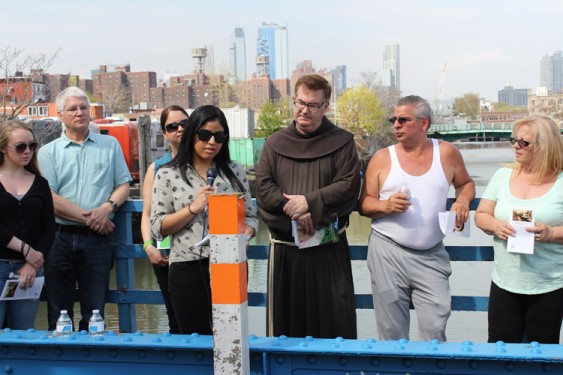 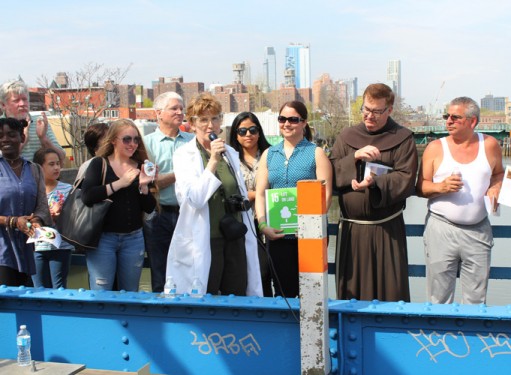 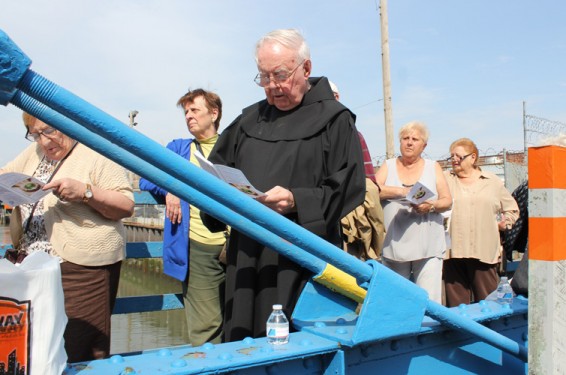 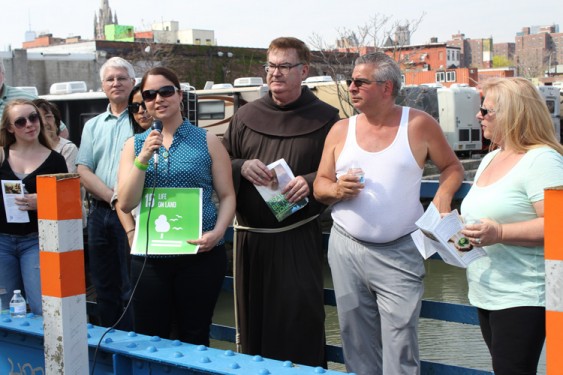 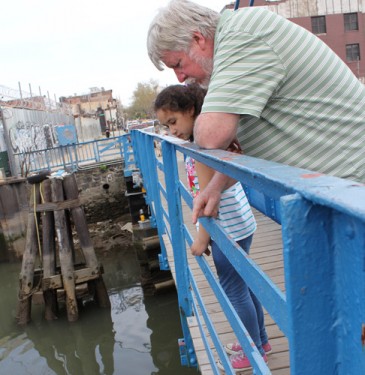 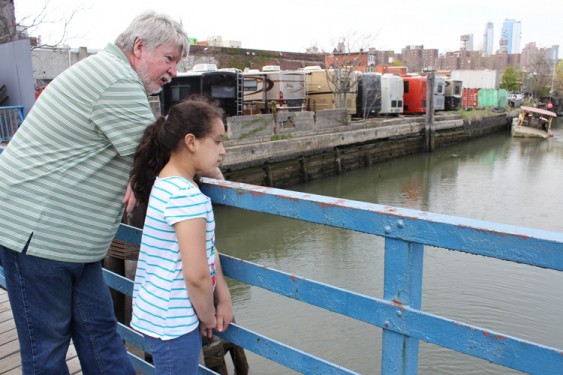 Completed in 1869, the Gowanus Canal was designed to be an industrial and commercial transportation route. Businesses and industries, including cement works, manufactured gas plants, oil refineries and chemical plants operated along the 1.8-mile long waterfront for nearly a century.

The Environmental Protection Agency added the canal to its national priorities list as a Superfund site in 2010. Among the toxins found in the canal are PCBs, coal tar, heavy metals and volatile organic compounds.

Dr. Kathleen Nolan, chair of St. Francis College’s biology department, tried to get a water sample for analysis before the blessing. Workers at a waterfront construction site wouldn’t grant her to access the canal, but she knew of another access point a few blocks away.

Cleanup plans, projected to take 10-12 years at a cost of $506 million, involve dredging contaminated sediment, capping off contamination that remains and using retention tanks to reduce the volume of sewage.

“You hear so many times they’re going to do something, but they just put buildings up,” said Eddie Mullin, a resident for 38 years, referencing the stately housing development under construction by the bridge.

“It makes you wonder what comes first: Cleaning it or getting buildings along it? It all comes down to money. And it’s so polluted, how could you let people live so close?”

St. Francis College student Matthew Wise was taken aback when he arrived at the site. It was his first time seeing the canal in person.

“The Christian thing to do is to care for God’s creation. How can we say that we love God, whom we don’t see, if we don’t love His creation that we can see.

“And this is God’s creation,” he said, overlooking the putrid waters.

“We thought it was a great idea to come to the Gowanus Canal so we can see face to face what pollution in the environment is doing,” said Noemi Rivera, who moderates the college’s environmental club. A week of earth-friendly activities, including a park clean up, planting day and recycling event, led up to the blessing event.