Reverend Monsignor John J. Powis, a retired priest of the Diocese of Brooklyn, died on Sept. 29. 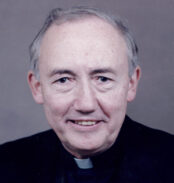 Msgr. Powis served the Diocese of Brooklyn as pastor of the Brooklyn parishes of Saint Barbara, Saint Sylvester, and Our Lady of the Presentation.

He also served as Parochial Vicar of the parishes of Our Lady of the Presentation, Saint Benedict, Transfiguration, Epiphany, and Saint James Cathedral, all in Brooklyn.

He received the honor of Prelate of His Holiness in 1986.

“Msgr. John Powis was a dedicated servant of the Lord for many, many years. He served the people of the Diocese with great zeal and dedication,” said Father Joseph Hoffman, pastor of St. Barbara Church, where Msgr. Powis served as pastor emeritus.

“Most especially his years were spent ministering to and serving the poor, the sick, the abandoned, the uncared for and many of the people who are discarded by our society. He was a voice for the voiceless and sought justice for those treated unfairly.”

Another longtime colleague, Father Ed Brady, pastor emeritus at St. Margaret Mary Church in Astoria, said Msgr. Powis “was quiet about himself but vigorous about his priestly work. He dedicated himself to the newly arrived folk that settled in the Brownsville and Ocean Hill area of Brooklyn. He prayed with them, organized them in finding and developing leaders to obtain city services as well.”

A vigil Mass was held on Monday, Oct. 4 at St. Barbara Church, with a funeral Mass on Tuesday Oct. 5 at St. Barbara. Burial followed at St. John’s Cemetery, Queens. 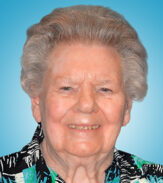 Baptized Florence, she grew up in Saint Clement Pope Parish, South Ozone Park. After graduating from high school, she entered the Novitiate of the Sisters of Saint Joseph.

A lifelong learner, Sister Joan earned a bachelor of arts degree in French/English/Philosophy from Manhattan College, a master of arts in U.S. and European History from Saint John’s University, and additional credits and certification in Theology, Scripture Studies, Sociology, Anthropology and Maritime History from educational institutions from Massachusetts to Texas.

In 1962, Sister Joan journeyed to Ponce, where she taught History at the Catholic University of Puerto Rico. Sister later ministered at Academia San Luis in Lajas and at Colegio San Jose in Puerto Rico.

Out of the formal classroom, Sister Joan Monica prepared children to receive the Sacraments at Floyd Bennett Air Base, the Brooklyn Navy Yard, and parishes in Ponce and Brooklyn and was the Director of Religious Education in St. Mary’s Parish in Mount Vernon and American Martyrs in Bayside.

After teaching for almost 50 years, Sister Joan shared her hidden talents with those laboring at Calvary Cemetery and attended to the temporal needs of the Sisters at the Mary Louis Convent.

Throughout her long and blessed life, Sister Joan’s attentive manner, her open heart, and ready wit, endeared her to all.