WINDSOR TERRACE —Police released a video of a woman destroying a statue of the Blessed Mother and one of St. Therese, The Little Flower, that had stood at the church for 84 years.

The NYPD is asking for the public’s help in finding an individual responsible for destroying two statues outside Our Lady of Mercy Church in Forest Hills during the early morning hours of July 17. The NYPD’s Hate Crimes Task Force is investigating the incident. 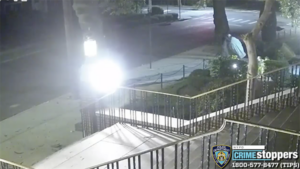 The attack took place outside the church at 70-01 Kessel St. at approximately 3:30 a.m. A person can be seen in the video dragging the two statues 180 feet across 70th Avenue and repeatedly slamming them into the ground, causing them to break, police said.

The individual sought by police is described as a female in her mid-20s, with a medium complexion, medium build, and wearing all-black clothing.

Saturday was the second time the same two statues were targeted by a vandal, according to the diocese. Earlier in the week, on July 14, the statues were toppled over but not damaged. The diocese said that it’s believed that the same person is responsible for both acts of vandalism.

Father Frank Schwarz, pastor of Our Lady of Mercy, said the statues have stood outside the church since the church was built.

“It is heartbreaking, but sadly it is becoming more and more common these days,” Father Schwarz said in a statement. “I pray that this recent rash of attacks against Catholic churches and all houses of worship will end, and religious tolerance may become more a part of our society.”