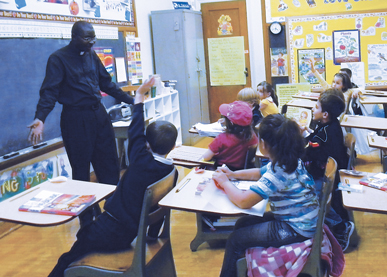 This Thanksgiving season, children at St. Margaret’s parish, Middle Village, have been learning an invaluable lesson – the power each person has to make a difference in the world.

Almost 500 children in the parish school and religious education program are wrapping up a two-week H2O Project, organized by the parish’s faith formation office, to bring safe, clean drinking water to a West African village. Students have been fasting on water and donating the costs of various beverages they have forgone toward a water-well drilling project in Atikpui, a village of over 3,000 people in Ghana.

The project is being coordinated through International Help of Missionaries (IHM), a nonprofit foundation started in 2008 by Don Magnotta to help clergy and missionaries serving in developing countries. Current programs create opportunities for children and young adults to become productive, innovative and self-sustaining adults in their communities and villages.

Magnotta, a parishioner at St. Margaret’s for almost 30 years, and a graduate of Our Lady of Lourdes School, Queens Village, started the charity after meeting several visiting priests from Africa who served at his parish.  Hearing about their homelands and the everyday struggles of their people touched his heart.

While there are avenues of assistance for the poor in the U.S., he said, “there are no food stamps, welfare checks or unemployment benefits for people in Ghana. But there are a lot of mouths to feed.”

Clergy members, he noted, receive small salaries but most give their incomes back to the people they serve. “By helping them, we’re building the church. It enables them to better live their mission,” said Magnotta, who works for a Manhattan marketing firm.

This summer, Magnotta approached Dolores Voyer, St. Margaret’s faith formation director, about getting parish children involved in a water-well project for the people of Atikpui, who currently rely on a dirty stream for drinking, washing and cooking. “Water is the source of life but if you don’t have it, you don’t have anything,” Magnotta said.

After receiving permission from Msgr. Steven Aguggia, pastor, and school principal, Dr. Philip Franco, Voyer introduced the project to students this fall. They watched a video about water conditions in third-world countries and learned how they could help. Letters were sent home to parents, outlining the project.

Voyer explained that while the school nurse said it was O.K. for boys and girls to refrain from beverages other than water, students were told to always do as their parents instructed, especially if they have medical conditions.

In mid-November, students received their supplies – instruction sheets, donation buckets, scorecards, wristlets (with the name of the African village  and the words, “I was thirsty and you gave me to drink”), and a prayer to say while fasting – and were asked to participate for two weeks.  The project officially ends this weekend.

Using the scorecards, they calculate how much money they’re saving by not drinking other beverages – milk, for instance, is 20 cents per serving, while soda is about 75 cents depending on whether students have a glass at home or a can from a vending machine. Students place the sum they save each day into the bucket.

“It’s interesting because the little children don’t quite understand – they ask why we can’t send water from here or send bottled water,” Voyer said.  First graders had a chance to ask their questions and receive answers from Father Perry Azah when he visited the school before Thanksgiving.  “He was so happy they were so interested,” Voyer said.

Older students, she noted, have inquired about the villagers, whether the well is a renewable resource and how water will be retrieved from the well.

Helping a Whole Village
St. Margaret eighth grader Nicholas Wunsch took to the project immediately.  As a Boy Scout and president of the school’s Junior BETA Association, Wunsch says he’s been involved in several service projects but “never on this big of a scale. … We’re helping a whole village.”

While he was aware of the “problem that not many people have clean water,” he said he was surprised to learn that villagers in Atikpui, especially children, walk six to eight hours just to collect enough water for their daily needs.

Over the last couple of weeks, he’s accumulated close to $25 by choosing tap water over his usual diet soda and fruit juice.  “It’s been O.K.  It feels different not to have sugar but it’s fine with me to drink the water,” he said.
Being that his schoolmates are involved, he says there is more incentive to stay on track, though he did break his fast for Thanksgiving.

While fasting on water may not seem like a huge sacrifice on the surface, Wunsch sees the broad picture – by helping one village, he said, “we’re helping the (African) nation.”

He feels this project has inspired him and his classmates to be more aware that there are needy people in the world and that everyone can do something to alleviate their suffering. “There are always people who need help and we can always do something to help other people,” Wunsch said.

Costs for the well are estimated at almost $15,000, and Voyer anticipates that each student will donate around $10 – enough to cover a third of the well’s cost.  “Whatever we get, it will be more than we had,” she said.

Besides raising funds, students are raising community awareness by spreading the word to family, friends and fellow parishioners, who are also making financial contributions toward the effort.  Interest is likewise growing among other parishes and schools. St. Adalbert parish, Elmhurst, donated $500 toward St. Margaret’s project and Magnotta says the parish is planning to undertake a similar project during Lent, 2012.

In addition to parish donations, IHM has also received private donations for this project. When sufficient funds are available, work will begin and Voyer will go to Ghana to videotape the well digging for students to see.

“This is going to change people’s lives over there for generations to come and I hope it changes the children’s lives here,” Magnotta said. Whether or not they realize it, he added, “these children are heroes to the people in Ghana.”