Back in the early 1970s, while I was teaching at what was then Cathedral College of The Immaculate Conception in Douglaston, I was part of a team-taught course. The course was on John Henry Cardinal Newman and the team consisted of the late Fathers Christopher Huntington, James McMahon, and myself.

When we decided to give the course none of us knew a great deal about Newman but we all admired him and wanted to know more about his thought. Our plan was that Father Huntington would handle Newman’s theology, Father McMahon would cover the historical period in which Newman lived and worked, and I was to cover Newman’s philosophy. I recall that one day the three of us, aware that we needed an expert’s help, arranged to have lunch with Father Marty Healy, who had taught dogmatic theology at the major seminary in Huntington, for years. Before he went to Louvain to gain a doctorate in theology, Father Healy had read all the works of Newman. He eventually wrote his doctoral dissertation on the great English cardinal. 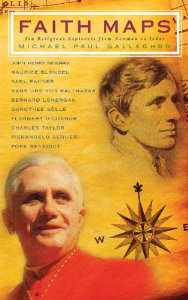 Teaching the course was a great experience for me. In all my years of teaching I have only been able to team teach a course three times and each time was a great learning experience for me. Apparently, judging from students’ reactions and evaluations, the courses also were very good learning experiences for them. What I do recall vividly about teaching the Newman course is that I worked very hard on the material. In fact, all three of us did. Much of what we read in and about Newman challenged us.

The Newman course is fresh in my mind now because of Father Gallagher’s excellent essay in Faith Maps. He writes the following:

“The guiding passion of his long life was to make sense of the Christian vision for an age when belief in God seemed in deep trouble. Always alert to the currents of the culture around him, Newman devoted much energy to how we arrive at faith, and he did this in many forms, ranging from sermons to philosophical reflections, and from autobiography to poetry and novels. The originality of his approach has influenced reflection on religious belief ever since and he remains the precursor of what is best in theology of faith during the last century or so. He liked to say that the best evidence for God lies within us, and so he moved the agenda away from external arguments to personal and pre-rational areas of moral and spiritual readiness. Without ever falling into subjectivism, he explored the inner movement of the self towards truth. Indeed the then-Cardinal Ratzinger commented (in 1991) that no theologian since Augustine had paid so much attention to the human subject.”

Three Challenges
Father Gallagher points out that Newman faced three important cultural challenges: a kind of rationalism associated with scientific verification, a liberalism that saw no positive truth in religion and an exaggerated emotionalism that reduced conversion to an emotional experience.

Today there is a popular opinion that only positive science, such as biology, physics and chemistry can reach truth. This seems to be a tenet of the so-called “new atheism.” Of course no intelligent person can be opposed to science but science is one way of knowing and religious faith is another way of knowing.

There is also a popular opinion that religion does not contain any truth but is just a matter of opinion, something like taste in art or literature. The Christian has to insist that the Risen Lord is not just an interesting idea but God’s revelation to the human race.

Though I have not met many people who think that religion is nothing but exaggerated emotionalism but whoever claims that is rejecting Christianity’s claim that the Risen Lord is a person to be encountered and to whom we are called to make a life commitment. Newman insisted that Christian faith should be personal. He was not encouraging any kind of theoretical or merely speculative or abstract judgment about God but rather a personal acceptance of God that led to commitment and action. Newman wanted an assent to God that was real, an assent that changed a person’s life.

Reading Father Gallagher’s essay on Newman has convinced me again that Newman’s insights can help us better understand our own faith and perhaps help others to understand the value of religion.