The parish community of St. Luke, Whitestone, celebrated the dedication of its newly restored and renovated church at a solemn Mass of Dedication on Sunday, Oct. 20.
“Today is a day of thanksgiving; it’s a day of joy, and it’s a day of renewal,” said Auxiliary Bishop Raymond Chappetto, who presided over the historic Mass.
“This celebration is filled with gratitude to God, filled with great joy and with a sense of beginning again.”
Nearly 2,700 parish families have awaited this new beginning for almost two years.
Back in 2011, the parish launched “Serving the Present; Building the Future,” a $3.3 million capital campaign to care for, maintain and improve the parish buildings. Renovations on the church began last year and were completed this summer. 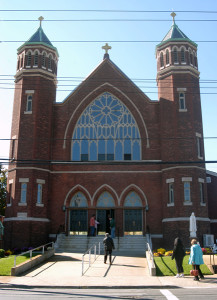 “It’s an old building,” said Msgr. John Tosi, pastor, noting that it dates back to 1898. “There was a lot of work that needed to be done.”
Exterior renovation work, including new liters, gutters, pointing and a new roof as well as new front steps, were the major accomplishments. The parish also took down the old convent building, which had fallen into disrepair.
When the exterior improvements were complete, work moved indoors in January, leaving parishioners “homeless and in exile,” as Msgr. Tosi put it.
Interior liturgical renovations included the movement of the tabernacle to the center of the altar, the creation of a eucharistic chapel and the installation of a new baptismal font in front of the altar. 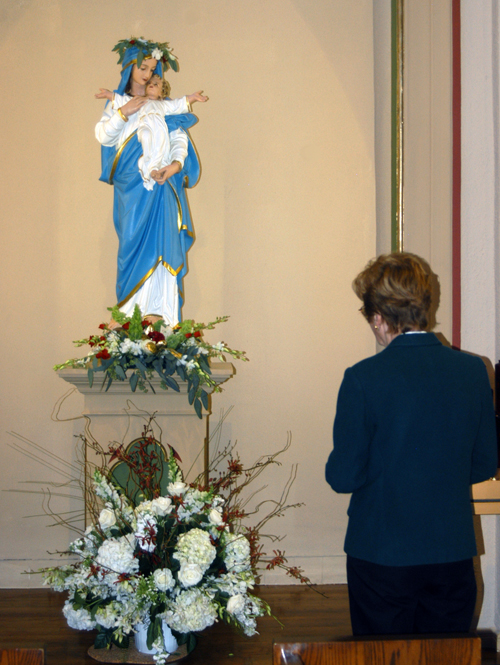 The altar, presider’s chair and ambo were refurbished, and a tabernacle from a previous renovation was brought out of storage.
Msgr. Tosi is particularly proud that the original light fixtures and statue of the Blessed Mother, both dating back to the church’s founding, were restored and returned to the worship space. “We tried to preserve what was preservable,” he said.
The Blessed Mother statue stands to the left of the altar. To the right, in the niche that formerly housed the tabernacle, is a marble statue of St. Joseph from St. Ignatius Church, Crown Heights, now closed.
A thorough cleaning and fresh paint in hues of red, blue, green, cream and gold round out the finishing touches.
Perhaps the most extensive interior work was carried out in the lower church, which was converted into a pastoral center – a place for fellowship and a meeting space.
During the eight-month renovation period, weekday Masses were held in the rectory basement, and weekend Masses were said in the school hall. Sacraments were celebrated at neighboring parishes.
Masses resumed in the church on Sept. 1. 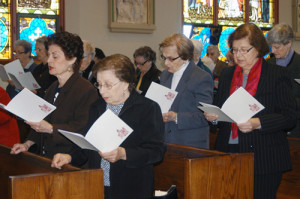 Breathtaking Changes
Before the dedication Mass began, parishioner Carmella DeNigris spent time admiring the refurbished statue of the Blessed Mother tenderly holding her Infant Child.
“It’s a blessing to see the church like this,” said DeNigris, who thought the church “looked beautiful” before the renovations. “But now, it’s breathtaking.”
Tears formed in Joseph Galanti’s eyes as he looked around the church. A parishioner for 47 years, he said his favorite change is the movement of the tabernacle to the center of the altar.

“Now we have Christ where He belongs – at the center of the altar, at the center of our attention,” he said.
Altar server Brogan Mooney, 11, is also pleased with the renovations, which he says enhance the worship space but maintain “its proper glory.”
Like Galanti, he’s happy with the new site of the tabernacle.
“The crucifix, the (vigil) light and the tabernacle now are all aligned,” he said. “They all represent Christ.”
Every eye was firmly fixed on the altar for the dedication Mass.
Concelebrants included Msgr. Tosi; Fathers David J. Dettmer and Michael J.S. Bruno, parochial vicars; and neighboring pastors, Msgr. Denis Heron of St. Fidelis, College Point, and Father Gerard Sauer of St. Mel, Flushing.
Father Alonzo Cox served as master of ceremonies. Transitional Deacon Peter Penton assisted on the altar.
In his homily, Bishop Chappetto said, “The Church of St. Luke – Msgr. Tosi describes it as noble. … Noble means well known, it means impressive, it means possessing great qualities; that’s an apt description of St. Luke Church.”
The bishop blessed the congregation and the altar with holy water. He offered the dedication prayer and the rites of anointing, incensing, covering and lighting the altar were conducted. After Communion, the bishop inaugurated the eucharistic chapel. 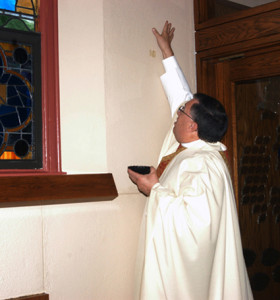 “Good people of St. Luke parish, this is your day,” Msgr. Tosi told the congregation. “You made this possible.”
“Our work is not done,” he added. “We must now move forward to preserve our beloved school building.”
School Renovation Set for 2014
Plans are underway to begin renovating the 103-year-old structure next year. Currently, over 620 students attend the parish school, and 500 children use the building for weekly religious education classes.
Since the school has neither an auditorium nor a gymnasium, Msgr. Tosi hopes to explore the possibility of building such a space for parish youth.
Bishop Chappetto closed the liturgy by thanking everyone who made the renovations possible, especially Msgr. Tosi. Parishioners echoed their appreciation for their pastor with a standing ovation.
Previous Diocesan News Story
Next Diocesan News Story