Every high school sports program experiences turnover. Sophomores become juniors, juniors become seniors and seniors move on to the next phase of their young lives.

For the Fontbonne Hall Academy, Bay Ridge, varsity softball team, five seniors will be graduating from the program this spring.

Of that class, senior pitcher Nicolette Trapani and senior catcher Maria Serrantino have been looked upon as team leaders for their entire four-year varsity careers.

Both players have been team captains since sophomore year, so it’s their job to set the example for the Bonnies’ younger players.

“They’re (Trapani and Serrantino) good role models,” said junior third baseman Ariana Dillon. “They lead the team, and they’re good players. They’re like what everyone wants to be one day.”

Trapani, who will play college softball this fall at the College of Staten Island, has racked up an impressive resume of wins, innings pitched and strikeouts on the mound. Still, she’s quick to acknowledge the support she’s received from her defense.

“Everyone always talks about me and Maria,” she said. “Meanwhile, it’s all about the team, because without them, plays wouldn’t be made. They’re like my sisters. They’re always there to back me up.”

Serrantino, whose softball career will continue at the University of the Sciences in Philadelphia, agrees wholeheartedly with her longtime battery mate that all 16 players on the roster have done their part to contribute to the team’s success.

“It’s definitely been a team effort,” she said. “The team carries us along. Whenever there’s a hit, they make the plays.”

The same goes for the Bonnies on offense. Serrantino provides a strong punch as the Bonnies’ cleanup hitter, but she wouldn’t be able to drive in runs without her teammates consistently setting the table in front of her. 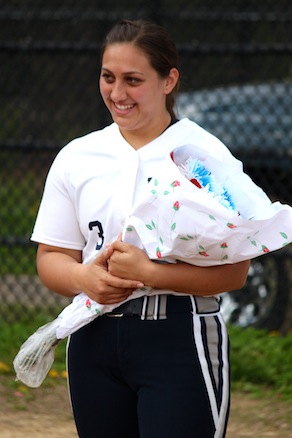 After working together for so long, Trapani and Serrantino have developed a friendship that will last a lifetime. Often dealing with tense situations during a game, this friendship has come in handy.

“She’s (Serrantino) my best friend, so I trust her,” Trapani said. “She makes it easier for me to pitch. No matter what she calls, I know she’ll catch it and place it correctly. I know she knows what she’s doing.”

“It’s definitely grown in the past four years,” Serrantino said about the dynamic duo’s friendship. “It’s going to be hard for both of us to go to college and adjust to new people because we’re so comfortable with each other.”

Though college is on the horizon for these two, they both said that their focus right now is helping the Bonnies advance as far as possible in the playoffs. The team finished as the runner-up last year to Kellenberg M.H.S., Uniondale, L.I., in the Catholic state championship game.

No coach wants to ever think about the prospect of losing his two best players. But Fontbonne head softball coach Frank Marinello, who is in the midst of his 10th season, said the team has a strong core group of players returning next year. However, he will always remember the impact Trapani and Serrantino had on his program.

“Nicolette is a lead-by-example, no-fear kid, and Maria has just been a constant from day one,” he said. “They basically put the team on their back and brought us to where we are right now. Pitching and catching is essential.” 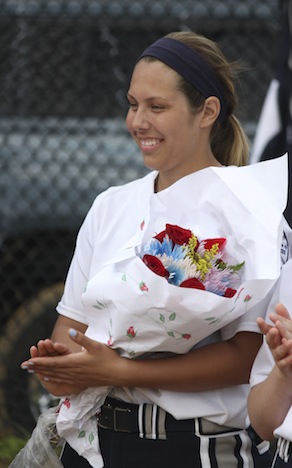 According to Marinello, these standout players, along with fellow seniors Christina Calascione, Maria Gentile and Suzanne Nordbo, instilled the attitude that they could play with anybody in the Catholic league.

“Win, lose or draw, we’re going to put a competitive team on the field at any given time,” Marinello said. “They’ve definitely broadcast that through the rest of their teammates.”

No matter how this season ends up for Fontbonne, the memories created on the softball diamond will last a lifetime.

“It’s been an amazing ride,” the slugging Serrantino said. “I’ve grown up with Nicolette and the other seniors. It’s been a lot of fun. I’ve learned a lot about myself in the last four years.”

As for the team moving forward, the sophomores will soon become juniors, and the juniors, like Dillon, will step up as the senior leaders. Losing a strong group of seniors may be tough, but the Bonnies will again rely on a total team effort to win games.