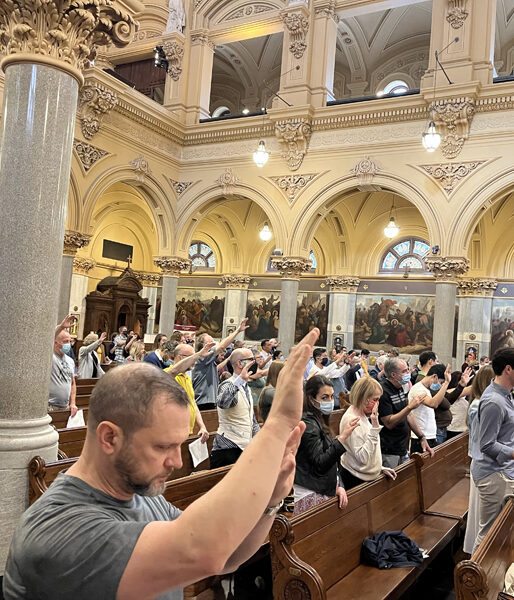 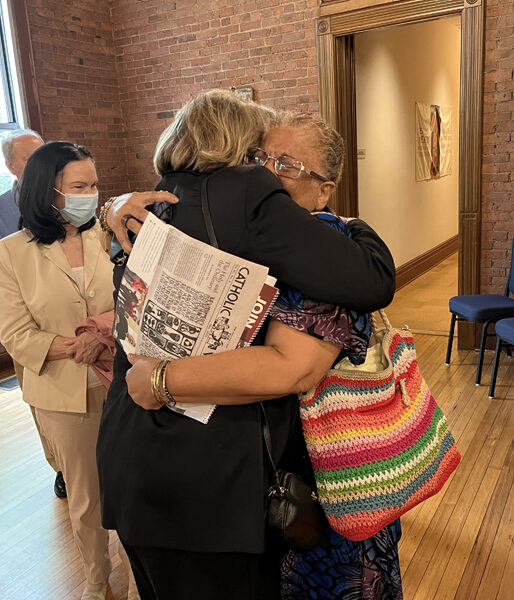 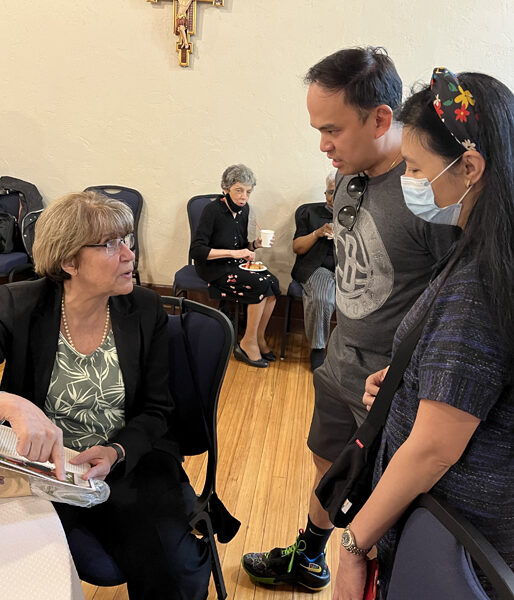 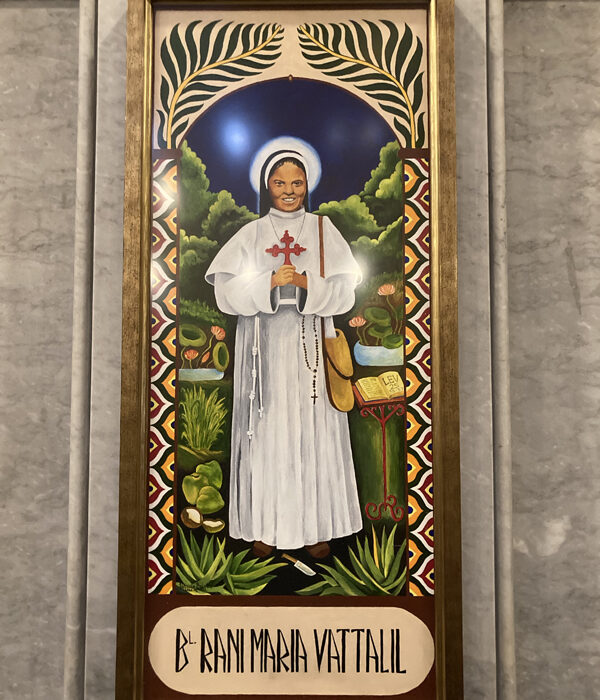 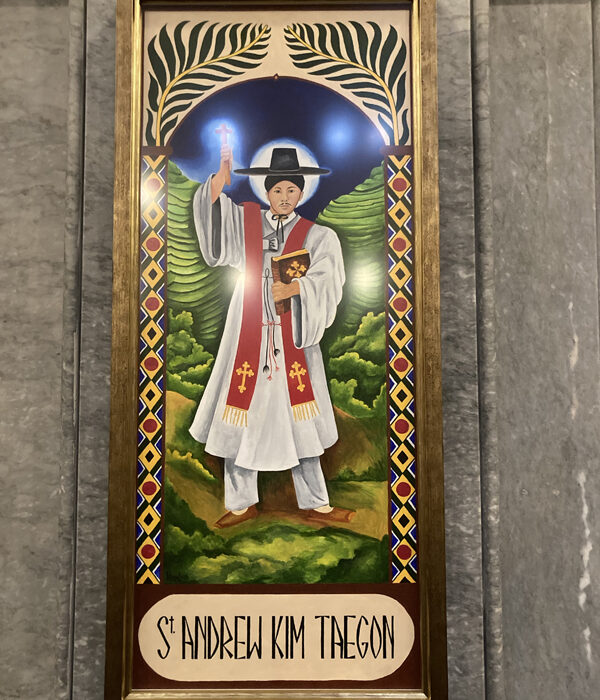 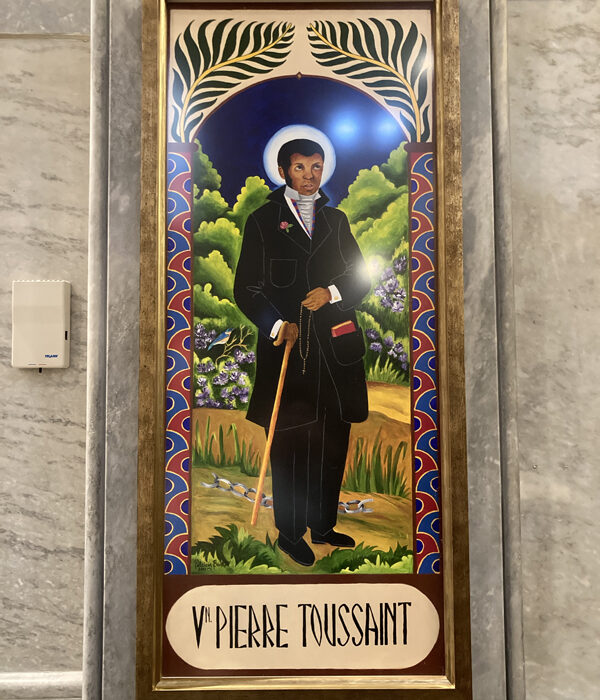 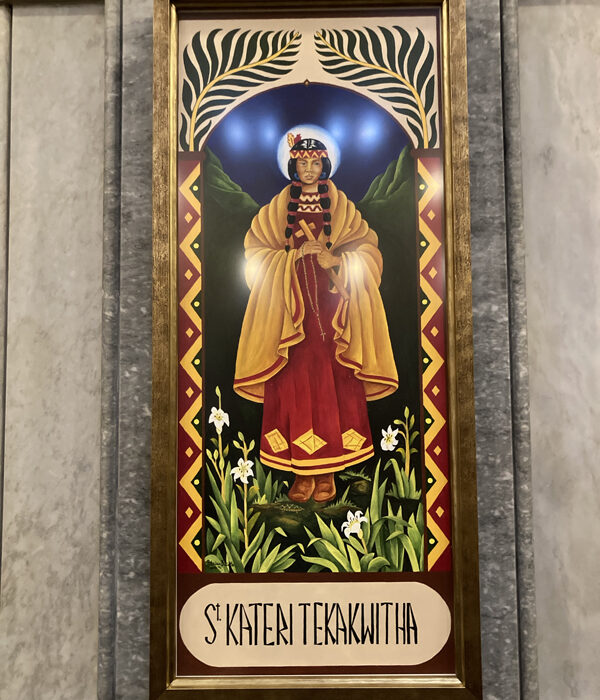 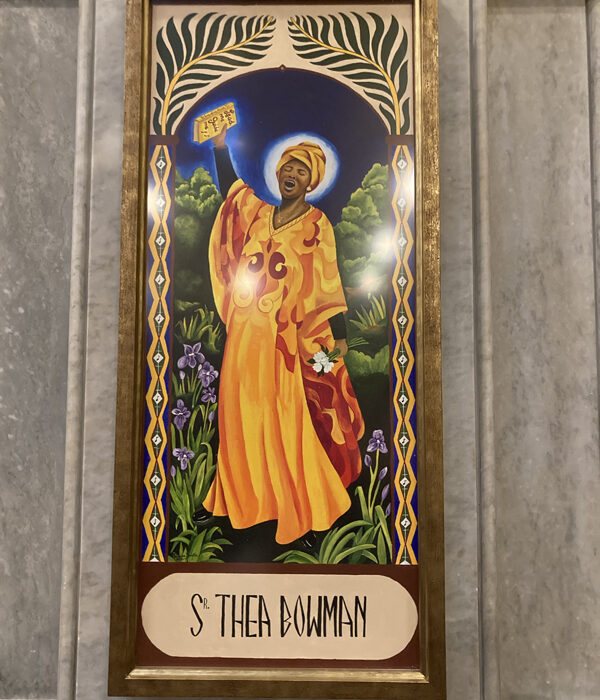 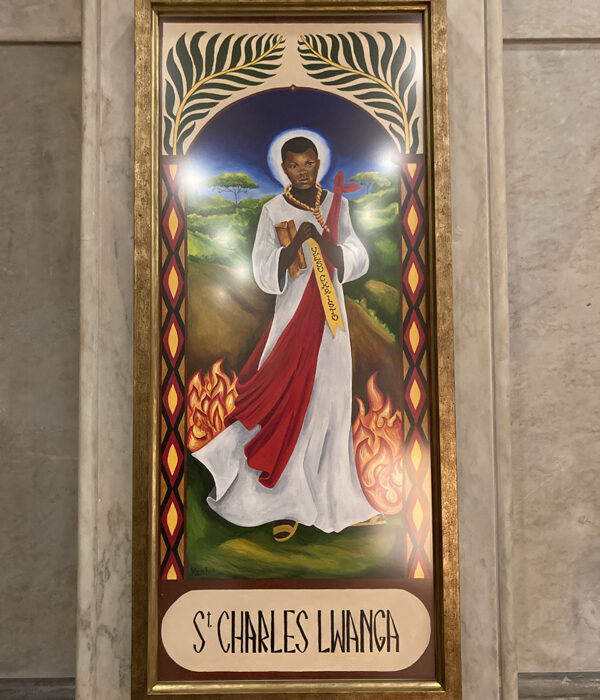 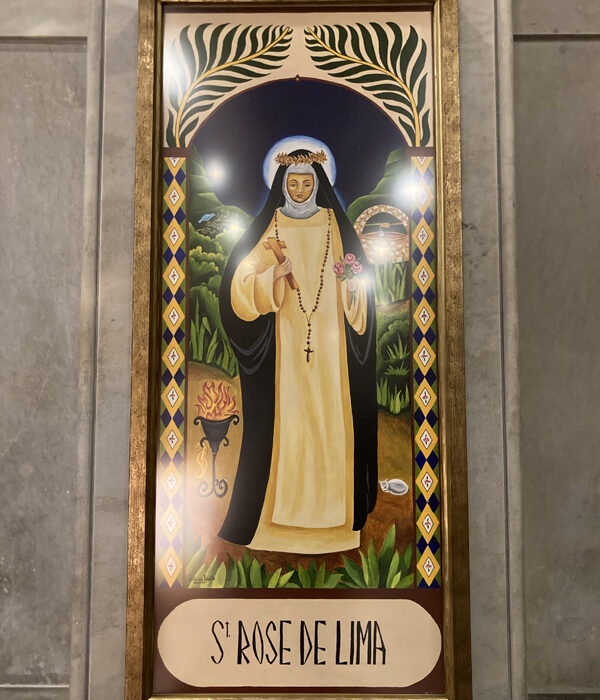 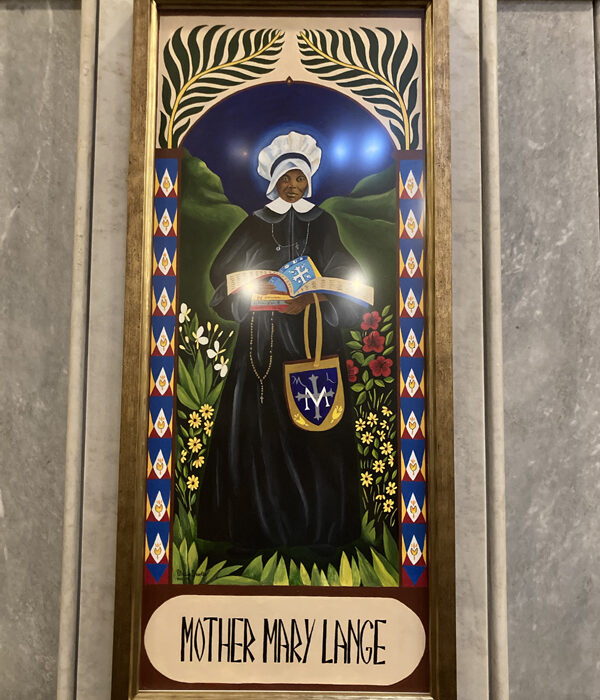 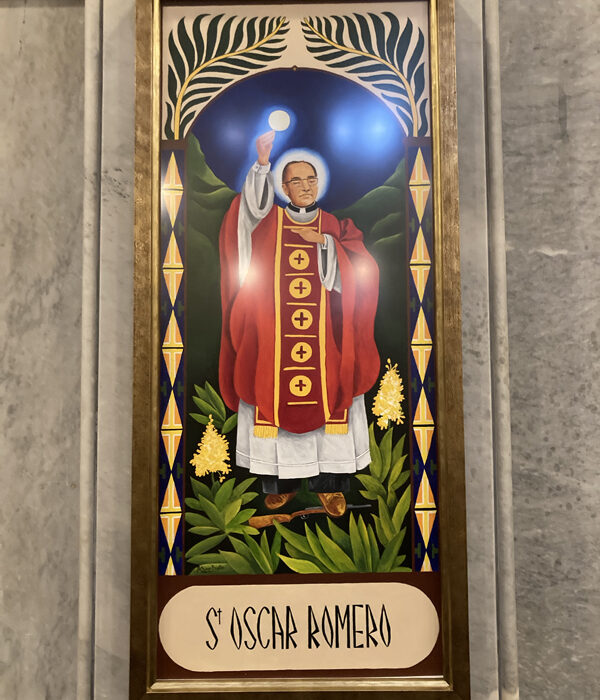 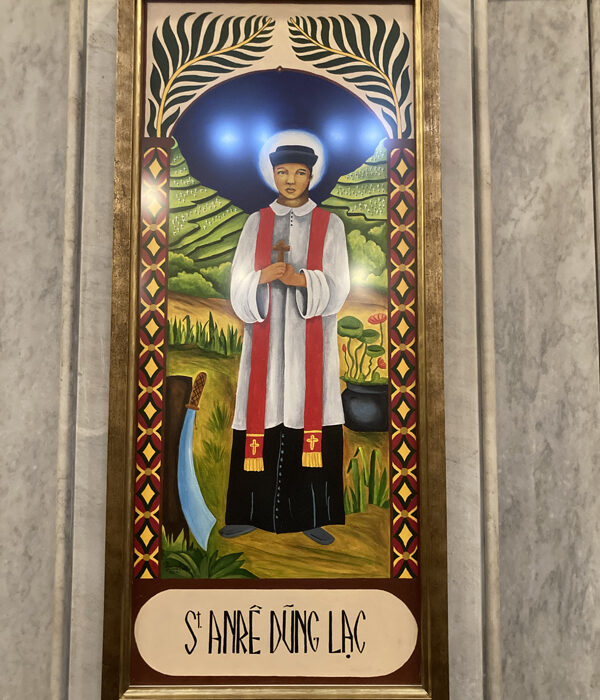 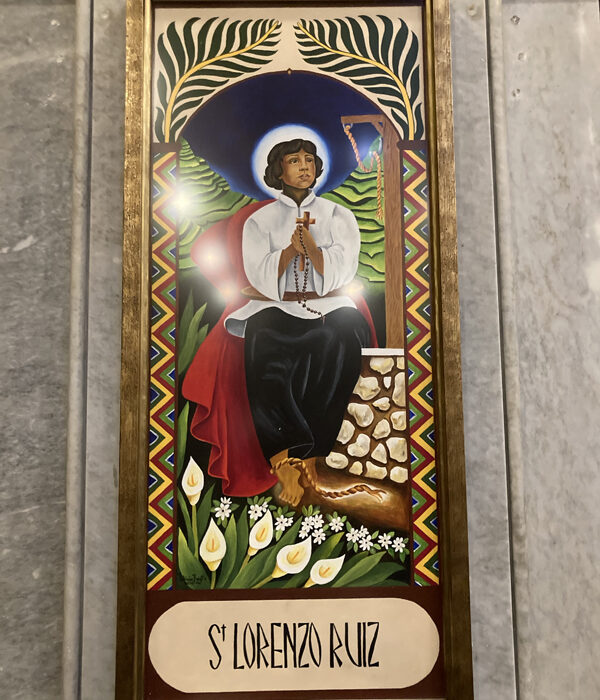 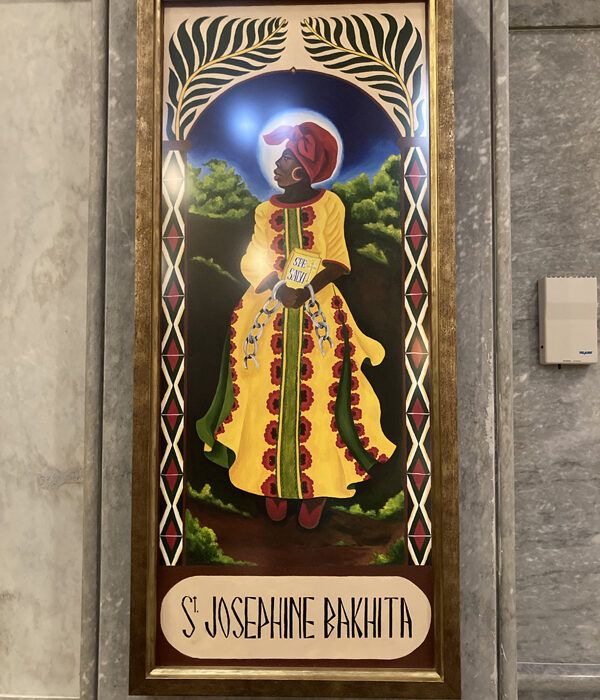 LOWER MANHATTAN — Ahead of the Sunday, June 12, 11:30 a.m. Mass at The Church of St. Francis Xavier, Ann Harris Jacobs spent time appreciating the 12 newly unveiled portraits of diverse saints and holy people that lined the church walls, and the newfound sense of welcoming that came with them.

“It means a lot to me and other people of color to see ourselves as a part of our church,” Jacobs said. “It says we welcome everyone of all backgrounds. The community now will probably be very different in its awareness of the universal Church.”

The church’s parish council conceptualized the idea to incorporate the portraits into the parish in 2020 as a way to diversify the church’s iconography to better reflect and welcome the current parishioners that fill the pews every week.

The Church of St. Francis Xavier was built in the 19th century. Therefore the existing iconography reflects the Irish, German and Italian members of the congregation at that time.

Queens artist Patricia Brintle painted the portraits. After the Sunday morning Mass, she was brought to tears reflecting on these past few months away from them, and the significance they now have gone from her studio and inside a place of worship.

“I really did a lot of research on each saint so praying to them was praying to somebody that I knew, and as the months happened I knew them more and more, and so when it was done and I finished it was like sending my kid to college,” Brintle said.

“And then when I came here it’s like meeting them all over again but all grown up,” she continued. “They’re the same but they have a weight that they did not have before. Now they are able to make miracles for people.”

The portraits are painted on wood. Brintle began the two-year process by sketching the holy people one by one with a pencil on drawing paper. Then she moved on to colorized life-sized versions on foam board. Then for the final step painted them simultaneously on the wood “for the sake of uniformity,” which is evidenced in the subtle design similarities between each one.

Brintle credits her Catholic faith with guiding her through the project. She said she prayed a similar prayer at the start of each session. In the case of St. Kateri Tekakwitha in particular, it wasn’t until Brintle prayed directly to the American Indian saint with an American Indian prayer that she got the features just right.

“It was God working. I was just an instrument,” Brintle said.

The portraits were blessed after Communion at each of The Church of St. Francis Xavier weekend Masses. Afterward,  the parish incorporated each of the holy people into a litany of saints, where each name was said followed by the words “pray for us.”

Father Ricardo da Silva, the celebrant of the Sunday morning Mass, also incorporated the 12 holy people into his homily, saying, “their examples of virtue and courage should not be forgotten.

“May we, inspired by their example, respond in a unity of love and peace as the worldwide Catholic Church, as the community of The Church of St. Francis Xavier, as families of differing configurations, and as distinct individual persons called to make God real in the world,” he said.

There was a reception after the Mass for parishioners to meet Brintle. The Tablet spoke with her there, as parishioners continuously chimed into the conversation with words of appreciation and awe over how the project came out. She even walked two Filipino parishioners through her process of settling on a younger look for St. Lorenzo Ruiz, the patron saint of Migrants, the Philippines, and the Filipino people.

Phil Gutierrez, a parishioner and member of the church’s art committee, said at the reception that he also walked through the church that morning and spent time with each portrait. He called the experience moving, and noted that the location of the portraits between the Stations of the Cross, among the congregation, “models this walking the walk of Jesus that is really inspirational.”