SS. Peter and Paul parishioners in Williamsburg look forward to moving to a new church building in the next two years. The new worship site will be located at the old parochial school building, McCaddin Memorial Hall.

The renovated space will also house classrooms for faith formation and a theater.

The changes are part of a strategic plan that involves the canonical process of “reducing” the current church to the profane in order to lease it and finance the new church. The idea came from an ongoing concern about the future of SS. Peter and Paul, due to a changing population and financial challenges that were preventing the parish from being financially self-sufficient and not dependent on diocesan central funds.

“We have a lot of pastoral vibrancy but unfortunately parishioners are not able to sustain the parish based on collections,” said Msgr. Anthony Hernandez, administrator of the predominantly Spanish-speaking parish. He added that needed maintenance activities and repairs have been postponed because of budget constraints. “(It) is a plan to utilize part of the parish’s assets to sustain it going forward.”

After consultation to determine that the care of souls would not be harmed, Msgr. Hernandez, who also serves as chancellor of the diocese, requested the reduction of the church building – which was built as a provisional temple in 1963 – as part of a plan to ensure future viability. This decree of reduction allows the parish to lease part of its property to be able to sustain a new worship site and other pastoral projects.

Mother Maria Bendita, S.S.V.M., who is director of faith formation, said that the parish had been looking for a way to secure the future of SS. Peter and Paul for a while and that this idea will make it possible.

“We really love SS. Peter and Paul and we pray and collaborate for it to remain here but we also know the real difficulties it faces,” Mother Bendita said. “This is an imaginative way to make the parish self-sufficient. We would not only have a bigger church but also many spaces for the needs of our community.”

Msgr. Hernandez added that the plan was approved after a long consultation and vetting process that involved the approval of many, including the diocesan College of Consultors, the finance council of the diocese, the state and the Vatican. According to Msgr. Hernandez, the Vatican called the plan “creative and imaginative.”

The construction process will take two years and the project will be paid for in five years, when the parish will be able to financially sustain itself.

“It will benefit parishioners in the future,” Msgr. Hernandez said. “It is going to anchor SS. Peter and Paul in a community that is vibrantly changing but a community it has been a part of since the 1840s.”

According to historical records, the first Mass in Williamsburg was celebrated in 1837 in a house on what is now Bedford Ave. One of the priests serving the community built a church calling it St. Mary’s. From 1840 to 1844, various priests ministered to the area until Father Sylvester Malone, a young Irish priest, was appointed pastor by Bishop John Hughes. He tirelessly served the parish until his death in 1899.

Father Malone planned the construction of a church on Wythe Avenue in 1847. It was the third church in Kings County and the first church built by Patrick Keely, who would design over 700 churches around the Northeast. The parish was dedicated under the new name of SS. Peter and Paul to avoid confusion with St. Mary’s in Manhattan.

At Father Malone’s invitation, the Sisters of St. Joseph conducted a school and later moved to the donated McCaddin Hall, which was built as a youth center. In its heyday, the parochial school had 1,100 children. The building was used as a school until 2002, when it closed.

Father Malone supported his parishioners when anti-immigrant and anti-Catholic sentiment from the Know-Nothing Party propelled gangs to riot on the streets of Williamsburg in 1854.

Nearly a century later, as a result of a fire and deferred maintenance, the church on Wythe Avenue was demolished in 1957, leaving the faithful worshipping at a chapel. During a visit to parish properties, a priest suggested the possibility that, given the increase of Hispanic parishioners, the church might need to move to the auditorium at McCaddin. In 1963, the current church building on South Second Street was erected as a provisional church.

The area continued to change and the church started to support a growing Hispanic community. Part of these outreach efforts included Msgr. Agustin Ruiz, pastor from 1976 to 2004.

Peter and Paul merged with Epiphany Church in 2007 and became one parish with two worship sites. The average Mass attendance at the SS. Peter and Paul site is about 900 people every weekend.

Msgr. Hernandez said that people have been “worried about the diocese having to close Peter and Paul” because of financial reasons, so they are excited that the bishop supports this plan.

“This project is the future of the community,” said Miguel Cuevas, parishioner. “Today the church was full, but (the new building) will attract more people who will be active in the future of Christianity in this area.”

Andrea Dibner, partner and principal at Tobin Parnes Design, the firm constructing the new worship space, said the McCaddin building lent itself to housing a church.

To accommodate parish spaces while renovating the McCaddin building to meet current code standards, the firm suggested building an extension to the structure. This would allow for additional space, handicap access, corridors, another staircase, an elevator and a freight elevator, more bathrooms, as well as office and service spaces. The new church, located on the first floor of the building, could seat 550 people and have devotional areas.

“A well-built temple, built with dignity will make the (parish) community grow,” said Father Juan Rosario. “We have the challenge to welcome the new generations and we hope God will walk with us during this great project which is His.”

In addition to integrating the church into the existing building, the firm will restore the existing mosaic floor entrance, the ornate marble double stairs and the building’s Romanesque and classical details.

Thomas Houghton – Keely’s son- in-law – originally built the Henry McCaddin Memorial School Building as a recreation center. The basement area where CCD classes will take place after the renovation used to have a bowling alley and a pool. The top floor housed one of the first opera houses in Brooklyn. The theater, which recently has been used as a gym, will also be restored and be used as a site for evangelization.

Many parishioners said the new church would allow them to share their joy with neighbors who may not have noticed the current building, which is located on a side street in the neighborhood.

Deacon Juan Carattini thinks the changes will make the parish “a powerful presence in the neighborhood.”

Henry Peralta, a parishioner of SS. Peter and Paul since birth, agreed. A member of the transition committee at the parish, he sees these changes as an opportunity to bring neighbors to Christ.

Albys Cruz, who became a parishioner five years ago when her parish St. Mary’s, Maujer St., merged with Most Holy Trinity in Williamsburg, is also part of the transition committee, which is going to bring support to the community through the project.

Josefina Diaz and Maria Peña, who have been parishioners for 20 years, said this is a way to give youth and future parishioners more opportunities to thrive.

Leoncio Peña called the project a chance to maintain the unity and sense of community that has always been a part of SS. Peter and Paul.

Before the renovations begin, the church building on 82 South Second Street will be relegated from the sacred to the “profane but not sordid use” on April 3, when the decree of reduction goes into effect.

That day, after Divine Mercy Sunday Mass, parishioners will process out of the church carrying the Blessed Sacrament and other church items to McCaddin Hall. Parishioners will celebrate Mass there until June. Once the restoration of McCaddin begins, Masses will take place in a tent by the corner of South Third and Berry Sts. The basement of the rectory will be used by the youth ministry of the parish and the 200-250 children completing their religious education will have classes at a nearby public school.

Mother Bendita said that although the emotional attachment to their church building – which has seen many milestones in parish life – is natural, the changes will ensure that future generations get to experience what it is like to belong to SS. Peter and Paul parish.

“SS. Peter and Paul is going to move forward,” she said. “It will be the same parish but in a new church.” 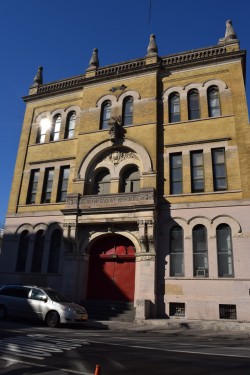 The McCaddin Memorial Building on Berry Street will house the new church and facilities for SS. Peter and Paul parish in Williamsburg. 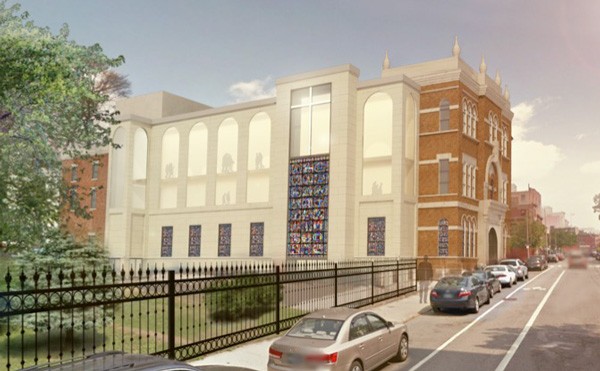 An artist’s rendition of the new church at SS. Peter and Paul parish. Construction and renovation of the McCaddin Memorial Building will start in June. 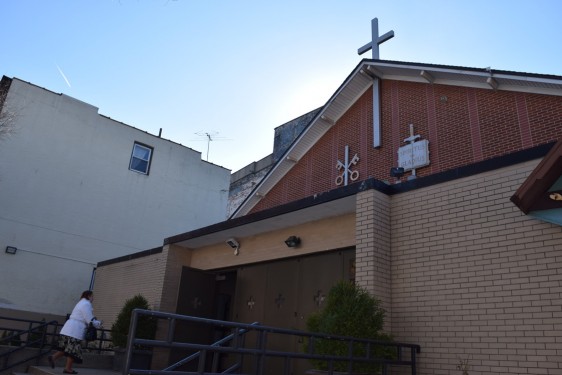 The current SS. Peter and Paul Church was built as a provisional temple in 1963. It will be will be relegated from the sacred to the “profane but not sordid use” on April 3.