NBA executive Mark Tatum grew up on the streets of Brooklyn, and returned to his native borough to share words of encouragement with students at Salve Regina Catholic Academy in East New York, Nov. 5.

“Mark grew up five miles from here and never thought he’d be the second person in command in the NBA,” said Roxanna Elder, principal at Salve Regina. “It’s because of his dedication and hard work. … I want my students to realize this could be them one day.”

A longtime friend of Elder’s husband, Tatum spoke to fifth through eighth graders about how he has worked toward greatness in his life.

Tatum is the deputy commissioner and chief operating officer for the National Basketball Association (NBA). As such, he oversees the NBA’s business operations, communications and marketing on a global scale. He is also responsible for the WNBA, Olympic and D-League teams.

Or to put it more simply, as Tatum explained to Salve Regina students, “I’m kind of like the assistant principal of the NBA.” 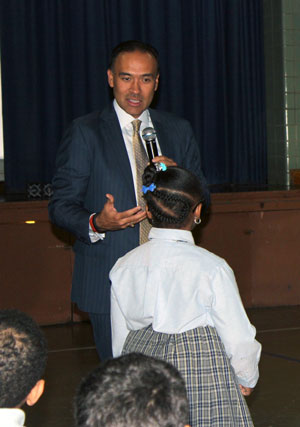 He spoke to the middle schoolers about growing up in East Flatbush, where his parents still live. He graduated from P.S. 181, I.S. 227 and Brooklyn Tech and then Cornell University, Ithaca, N.Y., and Harvard Business School. Prior to the NBA, he worked for Proctor and Gamble, Pepsi-Cola, The Clorox Company and Major League Baseball.

Students were invited to think differently about their own lives as Tatum offered three pieces of advice that have served him well: Dream big, follow your passion and work hard.

“You can do anything you want to do,” he told students, who are about the same age as his sons. “Don’t let anyone in the world tell you that you can’t achieve what you want to achieve.”

At times, Tatum said he was told that he couldn’t do certain things, that he should set his sights lower. Instead, he persevered and worked hard in school. Although his dreams changed, his education and determination led him to find a job he loves and enjoys doing everyday.

“Find something you really love doing – whether that’s robotics, math, science, soccer or basketball,” he said. “When you do something that you love, you’re more likely to do it better and you’re going to have more fun doing it.”

Salve Regina’s award-winning robotics team, the Royal Sages, had fun showing their visitor that robots can play basketball. Students guided their bot, which stands a few inches off the ground, to pick up an orange ball and throw it into a hoop.

The robot missed, but as far as impressing Tatum, it was a slam-dunk. He rewarded the team’s efforts with a warm smile, applause and even posed for a photo with the team.

“It was a privilege for Mark (Tatum) to come out here and talk to them,” said Casey Seawright, physical education teacher. “He was just so open and smiling. He’s very down to earth and willing to help the youth strive.”

“I think it was very inspirational,” he said. “I want to be in the NBA when I grow up so if he tells me never to give up … to keep on trying my best, that really helps me.”

Like Tatum, Aracena said he understands the importance of education in achieving his future goals. At Salve Regina, he said, “they teach us to put education first because education will take you anywhere you want to go.”

“Education is something that no one can take away from you,” added sixth grader Elijah Washington, who wants to be a professional football player. “If you can think about it, you can do it because nothing is impossible.”

Elder was thrilled with the students’ reaction to Tatum’s visit.

“I hope they see that the possibilities are endless. With faith and hard work, anything and everything is possible,” she said. 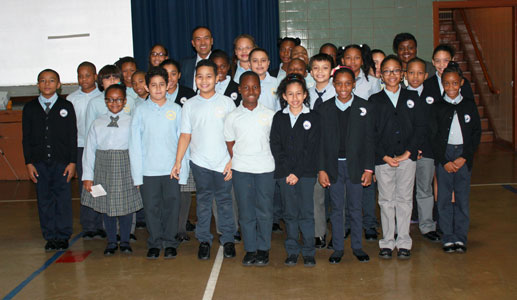