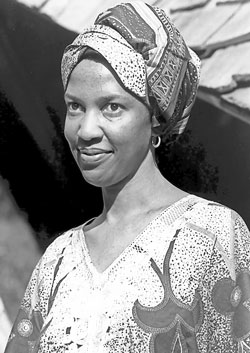 During my time at Aquinas H.S. in La Crosse, Wis., I was privileged to have a young Sister Thea Bowman as a teacher during my sophomore year.

I have written previously about Sister Thea, who was the first black sister in the Franciscan Sisters of Perpetual Adoration whose motherhouse is in La Crosse. She was the first African American person I knew.

Since February is Black History Month, it seems to be an appropriate time to reflect on these two possible saints in the Catholic Church.

Since 1976, every U.S. president has officially designated the month of February as Black History Month. Other countries around the world, including Canada and the United Kingdom, also devote a month to celebrating black history.

Each president has also endorsed a specific theme. The Black History Month 2020 theme, “African Americans and the Vote,” is in honor of the centennial anniversary of the granting of women’s suffrage (1920) and the sesquicentennial of giving black men the right to vote (1870).

February also might be an opportunity to read the U.S. Catholic bishops’ pastoral letter against racism: “Open Wide Our Hearts: The Enduring Call to Love.” The document was approved in November of 2018 at a general meeting of the U.S. Conference of Catholic Bishops.

The bishops point out, “Racism arises when — either consciously or unconsciously — a person holds that his or her own race or ethnicity is superior, and therefore judges persons of other races or ethnicities as inferior and unworthy of equal regard.

“When this conviction or attitude leads individuals or groups to exclude, ridicule, mistreat, or unjustly discriminate against persons on the basis of their race or ethnicity, it is sinful. Racist acts are sinful because they violate justice. They reveal a failure to acknowledge the human dignity of the persons offended, to recognize them as the neighbors Christ calls us to love (Matthew 22:39).”

The bishops call on all members of society to end racism. “Racism can only end if we contend with the policies and institutional barriers that perpetuate and preserve the inequality — economic and social — that we still see all around us. With renewed vigor, we call on the members of the body of Christ to join others in advocating and promoting policies at all levels that will combat racism and its effects in our civic and social institutions.”

I urge people to study the lives of Sister Thea and Father Tolton, read the bishops’ pastoral letter against racism and do what we can to treat all persons of color with respect.

Uhler is the editor of the Catholic Herald, newspaper of the Diocese of Madison, Wis.

One thought on “My Memories of Sister Thea Bowman”