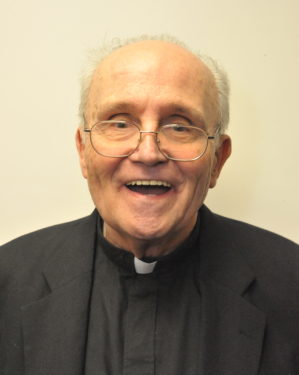 Msgr. Conrad R. Dietz, who spent most of his life teaching high school and college seminarians, died Sept. 27 at Northshore Manhasset Hospital. A senior priest, he had been living at the Bishop Mugavero Residence, Douglaston. He was 86 years old.

When the college closed, he continued teaching Philosophy to students who lived at the Cathedral House of Formation. He also served as an adjunct professor at Immaculate Conception Seminary, Huntington.

Members of the Cathedral College Class of 1969, the first graduating class from the Douglaston campus, remembered Msgr. Dietz as an excellent teacher.

“He was a truly good man, a wonderful teacher – a man who made his teaching memorable – and a man who always cared for his students. I remember both his teaching and his kind presence in our midst in Douglaston,” said Nicholas DiMichael.

“I’ve had quite a few teachers and professors in life but Father Dietz has always ranked number one! Such a kind heart and a love for his students.   His French classes were classic and you were never bored. May God richly reward him,” said George Kunzman.

“I am sure that all of us have very fond memories of a unique French and Philosophy teacher,” said Dennis Van Houten. “Amazingly, I still remember some of the French he taught us via his imaginary little character ‘Petite Jacqueline.’ He was a genuinely good man, with a very kind heart, who taught us about life by example more than words. We are all fortunate to have known him.”