Faith, tradition, culture and community – all came together in Mill Basin during late July at the annual Italian feast of the Madonna del Carmine, also known as Our Lady of Mount Carmel.

Hundreds flocked to southern Brooklyn for the four-day event at St. Bernard Church, where the highlight of the festivities was a bilingual closing Mass and hour-long street procession Aug. 2.

The Giglio Band of Williamsburg played the “Our Lady of Mount Carmel March” as men from the Gioiosa Marina Social Club, which helped organize the feast, escorted a float carrying a life-size statue of the Madonna through the streets followed by scores of devotees.

“As we walk through our streets to evangelize, to bring our Blessed Mother … people will see our faith in action,” Msgr. Jamie Gigantiello, St. Bernard’s pastor, said before leading the procession. “Maybe, just maybe, it may affect someone to come back with us to church.”

Prior to the procession, Bishop Nicholas DiMarzio was the main celebrant of a 4 p.m. Mass in Italian and English.

The feast evokes both pride and nostalgia in the heart of one of the Gioiosa Marina Social Club founders, Jimmy Mazzaferro, who honors the Blessed Mother under the title of the Madonna del Carmine with “love and respect.”

“It was our dream for many years to bring this (devotion) to New York,” said Mazzaferro, who joined St. Bernard parish when he emigrated from Italy in 1977.

“We’re very happy to represent our town, to continue our tradition,” he said. “It’s part of our culture and we want to keep it going for our children and grandchildren.” 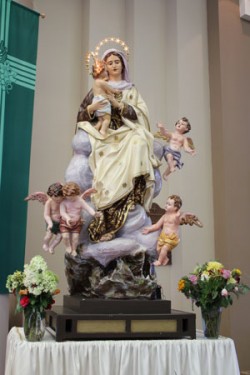 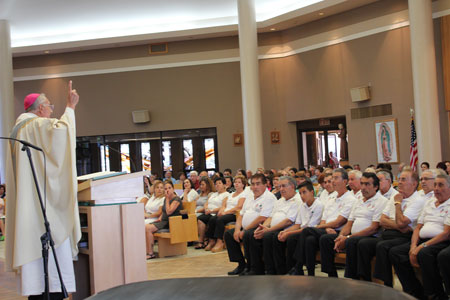 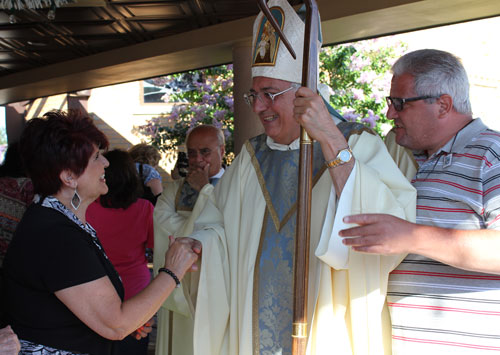 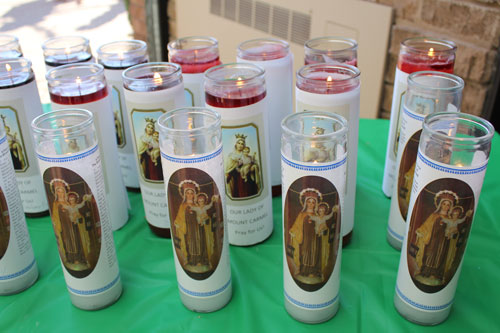 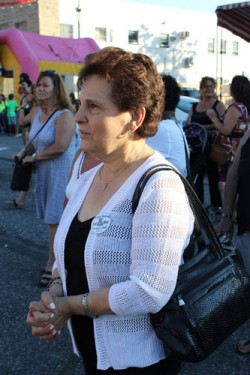 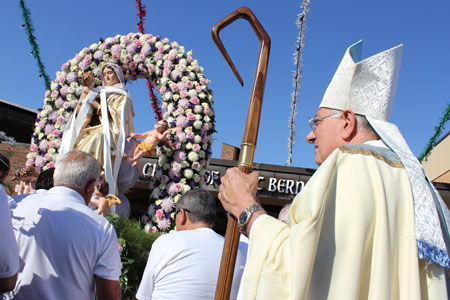 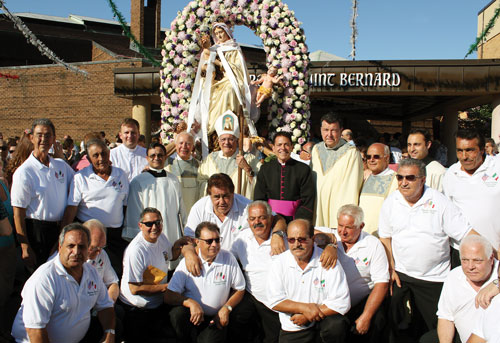 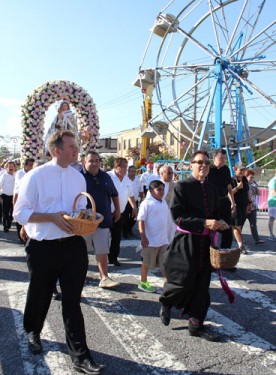 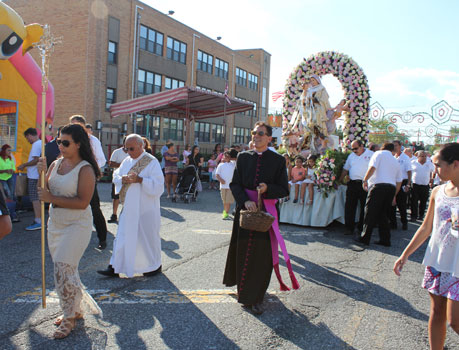 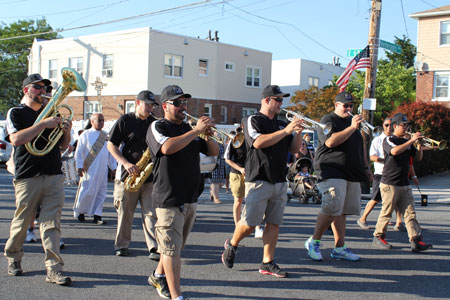 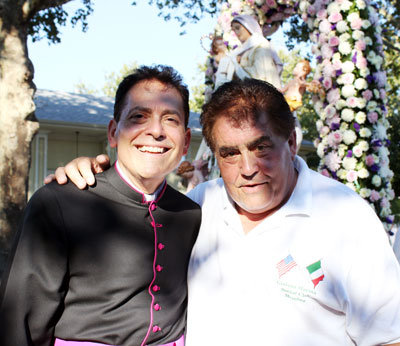 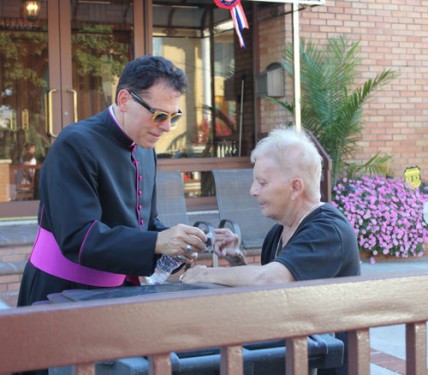 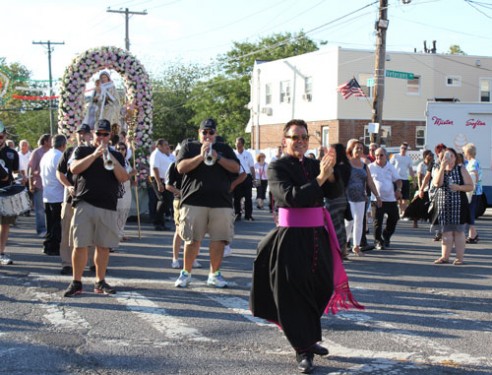 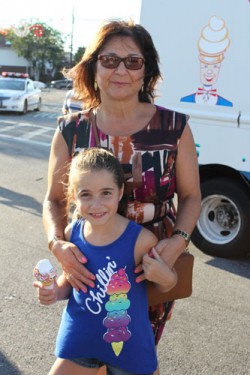 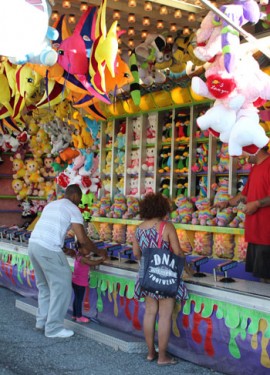 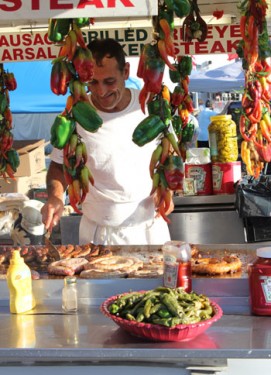 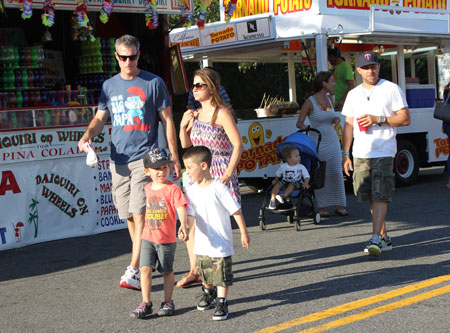 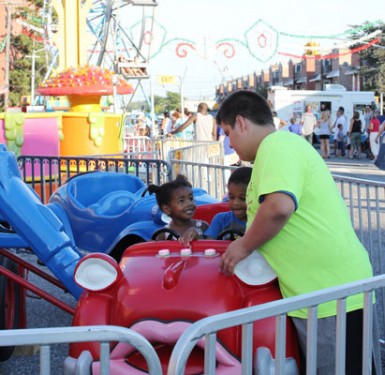 Mazzaferro’s nieces Rosanna Coluccio and Jessica Commisso have been part of the Mill Basin feast since it began a dozen years ago, and hope to follow in their uncle’s footsteps.

“It’s faith and culture together,” said Coluccio, who walked in procession with her husband. “It’s nice to bring together family and friends and the community.”

While the devotion is native to his hometown of Gioiosa Marina in the southern Italian region of Calabria, Mazzaferro says the Madonna del Carmine is for everyone from everywhere.

The Madonna’s mass appeal was evident in the multicultural faces of the intergenerational crowd, many of whom came out for the rides, games of chance and Italian fare, but also participated in the Mass and prayers following the procession.

While the feast day of Our Lady of Mount Carmel is July 16, St. Bernard parish traditionally holds its festa during the fourth week of July. In Calabria, similar festivities are held in the second week of August.

Wearing vestments adorned with the image of Our Lady of Mount Carmel, the bishop said in his homily, “This devotion is to Mary, most of all, as a mother – a mother to us.”

He offered some history of Mount Carmel in northern Israel, from the Old Testament prophet Elijah dispelling paganism there, to the 12th-century founding of the Carmelite Order. The Blessed Mother appeared to the Carmelite St. Simon Stock and gave him the brown scapular as a symbol of her maternal protection.

As a heavenly mother, the bishop said, Mary cares for her earthly children by clothing them in her scapular, interceding for them with her Son and guiding them to receive the Eucharist, food for eternal life.

He encouraged those present to continue attending Mass every Sunday and receiving the Eucharist so that devotion to the Blessed Mother may grow and spread.

“The Blessed Mother is my favorite,” regardless of the title under which she is being recognized, said feast-goer Ann Rega, 85. “I pray to her and she always answers me.”