Having stood tall atop the Maspeth hills for over a century, Holy Cross can now be identified as the church in Maspeth on Pope John Paul II Way.

Members of the city government, the Polish-Jewish Dialogue Committee, the Polish American Congress and Holy Cross parish worked together to co-name a block on 56th Road after the soon-to-be-named saint, who walked on that very same street 45 years ago.

Then-Cardinal Karol Wojtyla came to the U.S. to take part in the Eucharistic Congress in 1969 and stayed overnight at the rectory. He prayed and socialized with the parishioners, even sharing dessert with them in the parish hall. During that trip, he also celebrated Mass with the Polish community at St. Stanislaus Kostka Church in Greenpoint. 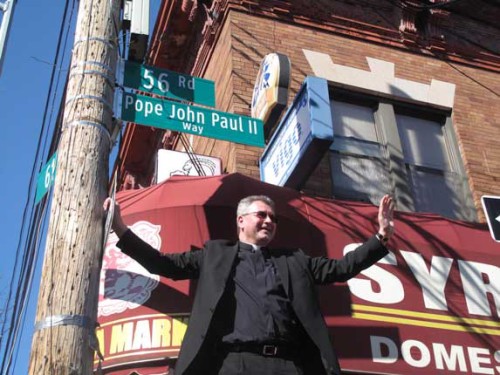 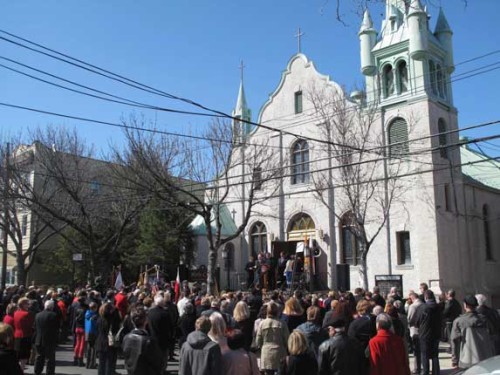 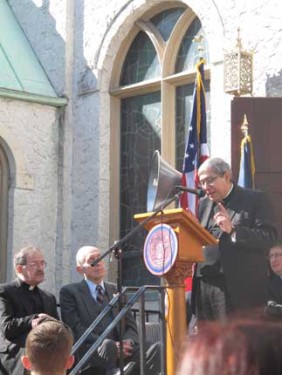 Auxiliary Bishop Octavio Cisneros tells the community that it is the life that he led that makes Pope John Paul II a saint. The Church will officially recognize him as such on April 27. Msgr. Peter Zendzian is seen on the bottom right corner. 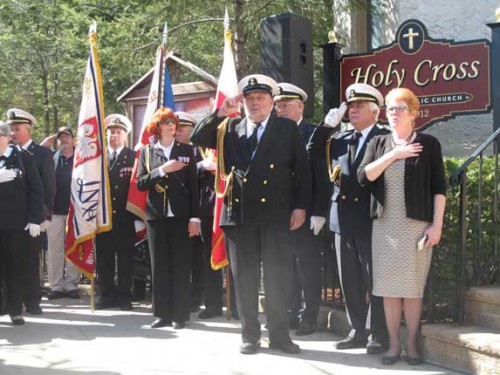 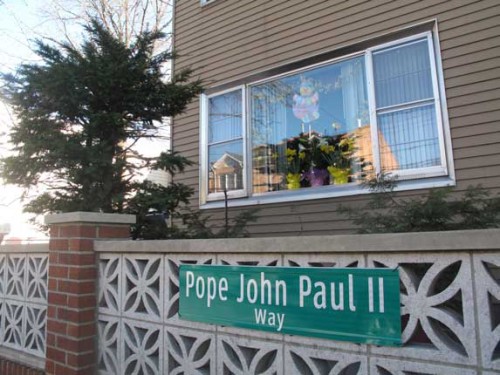 One of the street signs homeowners bought to display along John Paul II Way hangs along a residential fence. 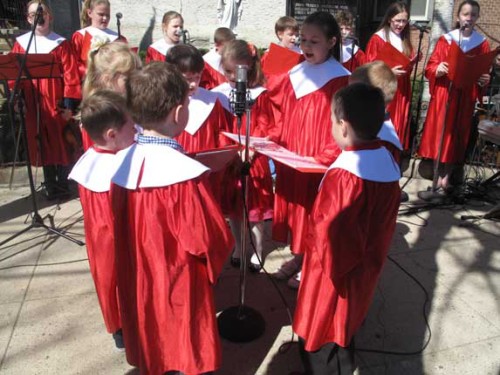 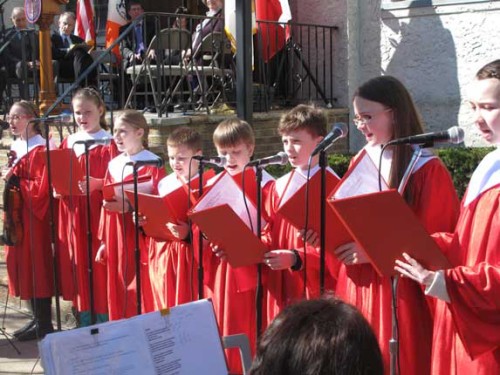 They sang “God Bless America,” “Lord, When You Come to the Seashore” (the English version of the pope’s favorite song, “Barka”) and Polish songs in honor of the Polish pontiff. 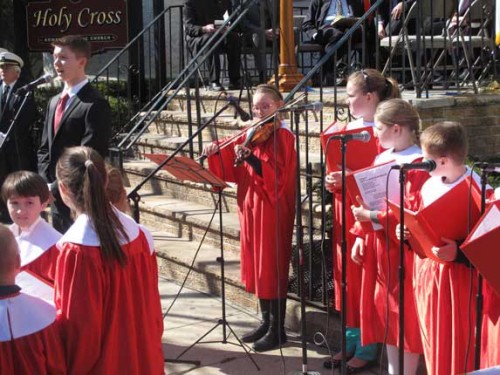 During the performance, one of the teen parishioners recited a poem in honor of the late pontiff. 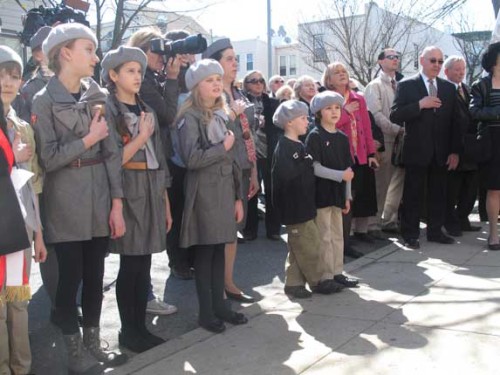 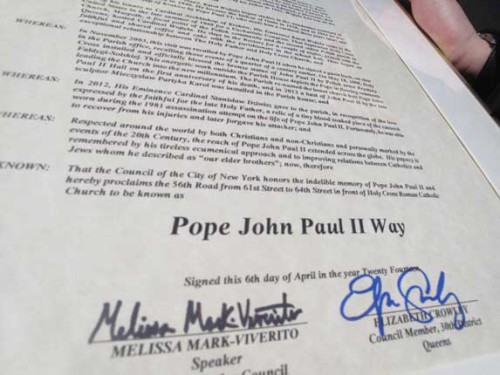 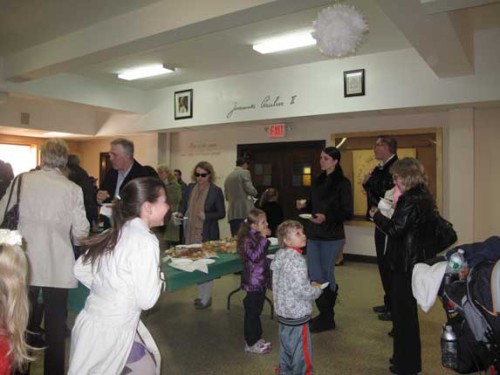 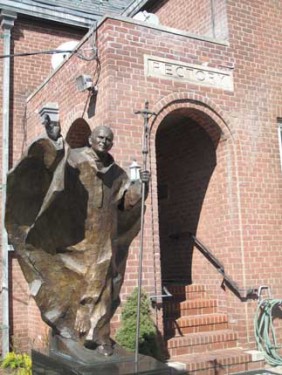 The larger than life statue of Pope John Paul II stands in front of the rectory where the late pontiff once slept.

Auxiliary Bishop Octavio Cisneros was the keynote speaker at the official co-naming. He said that people often refer to the impact Pope John Paul II had globally. However, he said, the block in Maspeth that now bears his name shows that the pontiff had a great impact on the lives of regular people. People in the close-knit Maspeth community want to identify with the saint who walked among them.

Parishioners Krzysztof and Helena Burzynscy live across the street from Holy Cross Church. They were able to participate in the co-naming ceremony while standing right in front of their home. They spoke about how honored they were to be part of a parish that hosted Pope John Paul II.

“There has to be something special here,” Krzysztof said.

As a way to show their pride in Blessed John Paul II, the couple purchased an official street sign, that reads Pope John Paul II Way, and hung it on their fence. Many of their neighbors did the same, including Helena Mardula.

Mardula has been a parishioner at Holy Cross for over 40 years. She said she would keep her sign forever because she is proud that her home can stand on a street named after the great pope.

During his talk, Bishop Cisneros told those gather that no one is making Pope John Paul II a saint on April 27, not the Vatican and not Pope Francis. The Church is simply recognizing the fact that Pope John Paul II became a saint by the way he lived his life, with the grace of God.

The people of the parish have long held Pope John Paul II in high regard, looking to him as an example of a good Catholic, said Msgr. Peter Zendzian, who served as pastor of Holy Cross for 13 years and was among those who helped make the co-naming possible. During his tenure, the parish erected a larger-than-life statue depicting the smiling pope walking against the wind in front of the rectory.

“It has been and will be a reminder to all that a man who may well also earn the further title of ‘the Great’ spent time in the quiet and respectful neighborhood of Maspeth and walked its streets and knew firsthand its life,” said Father Witold Mroziewski, pastor.

Msgr. Zendzian, now pastor of St. Matthias, Ridgewood, said that Holy Cross parish continues to be blessed by the gift of Pope John Paul II, who had “an infectious smile” and displayed “the holiness of a good priest.”

“We honor him as a man of God, who taught us to love our brothers and sisters,” he said.

“Pope John Paul II is a friend of humanity,” said Jeffrey Gottlieb, who came as a Jewish representative of the Polish-Jewish Dialogue Committee.

Standing beneath the newly uncovered street sign, Rabbi Moses Birnbaum spoke of the two times he personally met Pope John Paul II. During one of those meetings, the rabbi had the opportunity to tell the pontiff that his family lived not far from the pope’s hometown. The pope in turn asked the rabbi about how his family was able to survive World War II.

Rabbi Birnbaum praised the pope for the respect he had for all people, adding that the pontiff would bid farewell to the Jewish community by saying “Shalom.”