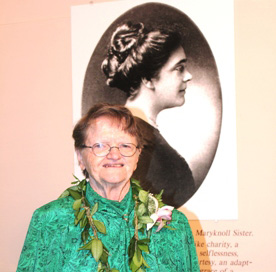 Sister Louise Bullis, M.M., a Brooklyn-born Maryknoll nun, is celebrating 70 years with her community. A member of St. Pascal Baylon parish, St. Albans, she graduated from Our Lady of Wisdom Academy, Ozone Park, in 1945, and entered Maryknoll in September of that year. She received the religious name, Sister M. Raymond Gerard, upon reception and made her first profession of vows on March 7, 1948.After studies at Maryknoll Teachers College, Maryknoll, she was assigned to teach second graders in Kahili, Hawaii, on Maui. She also taught grades one, two and five in Kaneohe, Hawaii, from 1959-67, and grades seven and eight in Kalihi Kai, 1967-69.She returned to the U.S. and earned a master’s degree in theology from Manhattan College in 1970. She served as adult religious education coordinator in the Diocese of Honolulu from 1970 to 1972.

She joined the Theology Department at Maryknoll H.S., Honolulu, teaching there from 1972 to 1974. She served as a member of the pastoral team at Malia Puka O Kalani (Mary, Gate of Heaven), in Hilo, 1974-2003. She then moved to Volcano, Hawaii, also on the Big Island, where she worked on the Big Island Liturgical Art Conference in 2003, and served as caretaker of a retreat house from 2004-06.

Sister Louise returned to the Maryknoll Sisters Center, Maryknoll, in 2007, and helped organize major events for the congregation’s 100th anniversary in 2012. She continues to reside at the center where she maintains an active role in the Rogers community.