WINDSOR TERRACE — Children often look high and low to spot their Elf on Shelf dolls during this time of year, but one entrepreneur took the concept to the next level.

Erica Campbell, owner and designer of the “Be a Heart” brand and mother to an 11-month-old girl, created Mary on the Mantel to provide comfort to kids and teach them about their faith.

“I wanted a Mary doll that they could take to a sleepover and cuddle with if they got scared like I did as a little kid. I wanted them to know she is always there as a friend and confidant,” Campbell said, further explaining she’s constantly turning to the Blessed Mother for guidance and support as she steps more fully into her womanhood and motherhood.

“We launched her in October and, as we were preparing for the Advent season, someone on my team had the inspiration that she could replace the Elf on the Shelf somehow. I thought it was a brilliant idea and we started thinking through how she would be different and what messages we would want to teach children through journeying with Mary.”

Unlike the elf who reports back to Santa whether boys and girls are misbehaving, Campbell’s Mary doll helps children prepare their hearts to meet her Son in the manger through acts of kindness for others. She said those acts could include donating no-longer-used toys or picking out food with their parents for a food pantry. Campbell also envisioned Mary nesting and preparing for the infant Jesus rather than doing mischievous things.

The dolls, which are crafted from calico cotton with a polyester filling, have embroidered features, are dressed in a removable beige dress and Marian blue veil, and come with a tiny tote bag. They are also offered in three skin tones because Campbell wanted every child to see themselves reflected in the face of Mary.

When Campbell took pictures of Mary around her house, she and her team were shocked and unprepared when the posts went viral on Instagram and Facebook, outside Be a Heart’s clientele. Catholics and Christians wanted one, and 1,500 dolls were sold at $35 each in the United States and select shops across Canada, France, and Australia.

“We didn’t have enough dolls to meet demand. They sold out the next day,” Campbell said. “I had already ordered more before they sold out, but they weren’t due to arrive until January. So, I asked them to rush ship me as many as they had finished, which was 580 more, and we sold out in less than two hours. We have 3,500 coming in the new year.” 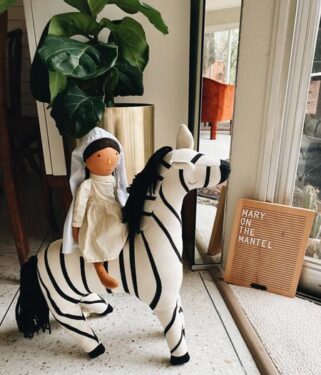 With that said, Campbell believes there’s a pull for many families who are longing to have beautiful traditions that focus on Mary, Joseph, and Jesus during Advent and Christmas.

So, she and her team are working on more ideas to expand the Mary on the Mantel line — possibly an activity book that would make it even easier for families to participate, a pregnant belly attachment for Mary, various apparition outfits for Mary, and even a donkey. Currently in production are an infant Jesus doll and a St. Joseph doll with a leather apron for his carpentry tools.

“My real dream is that Mary is not put away with the Christmas decorations, but instead a favorite security for children year-round,” she said.

“She teaches us how to love and how to say yes to God’s call for our own lives. I hope that she is not just for Catholic children, but all children. That they may feel how much Mary delights in them.”

The dolls are currently back-ordered but customers can sign up for notifications at beaheart.com that will alert them when they are back in stock.