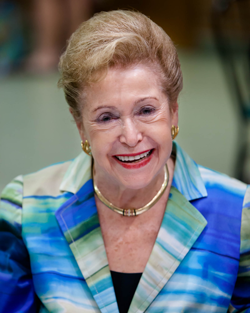 Higgins Clark was raised at St. Francis Xavier School and Parish in the Bronx, and attended high school at Villa Maria Academy.

Coinciding with the release of her latest book, “Kiss the Girls and Make Them Die,” on Nov. 5, CNS profiled Higgins Clark as one of most widely read Catholic writers. In that profile, she outlined her use of strong Catholic protagonists.

“I attribute that to the best piece of advice I ever received as a young writer in a workshop. The professor said, ’Write what you know,’” Higgins Clark said. “I’d grown up observing examples of Catholic women who were strong figures and persevered against difficult odds.”

Msgr. Frank Del Prete, pastor of St. Gabriel the Archangel Parish, Saddle River, N.J., remembers her as a “faith filled, active parishioner,” who sat in the front row in Mass.

“Since her faith was so important to her, she wanted people to know this through her books. She was very proud to be a Catholic,” Father Del Prete said.