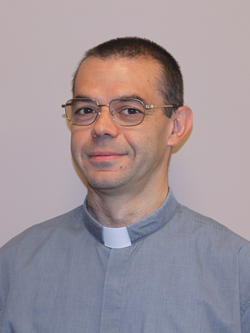 Father Giorgio Ferrara, P.I.M.E., a member of the P.I.M.E. (Pontifical Institute for Foreign Missions) who served as a parochial vicar at the Basilica of Regina Pacis, Bensonhurst, died Jan. 28 in Brooklyn. He was 59.

“He was only with us at the parish for seven months, but he made a lifetime of wonderful impressions on everyone he met,” Msgr. Ronald Marino, pastor of Regina Pacis, said. “There was never a person he turned away who wanted to talk with him or go to confession. He tried his best to address everyone’s needs — material and spiritual.”

A vigil Mass for Father Ferrara was offered on Jan. 30 at Regina Pacis. Bishop Nicholas DiMarzio was the celebrant, and Fathers Nicholas Apollonio and Marco Brioschi, both parochial vicars at Regina Pacis, were the homilists.

The funeral Mass, which was also held at Regina Pacis, was on Jan. 31. Father Kenneth Mazur, P.I.M.E., regional superior of the P.I.M.E. Missionaries, was the celebrant and homilist. Burial was at the P.I.M.E. Motherhouse in Detroit.

Father Ferrara was born and raised in Italy, where he was ordained a priest in 1986. He was a missionary priest who served for 17 years in Japan. He also worked in Detroit for several years. He came to Regina Pacis last year. Father Mazur said he thought the assignment was a good fit because Father Ferrara spoke Spanish.

“He was a very humble person,” Father Mazur said. “There’s not anything he wouldn’t do for his parishioners.”