After a year-and-a-half away from the court, Bishop Loughlin H.S., Fort Greene, head boys’ varsity basketball coach Ed Gonzalez made his return to the sidelines recently at the CHSAA’s spring tournament held at Archbishop Stepinac H.S., White Plains, N.Y.

Normally a fiery coach, Gonzalez has adopted a new philosophy of staying calm, since a health scare caused him to miss all that time in the first place.

In December 2019, Gonzalez’s Lions were facing rival St. Francis Prep, Fresh Meadows, in a CHSAA regular season contest. With just over a minute remaining, the then-56-year-old coach started feeling faint and had to sit down — something he never does during a game. 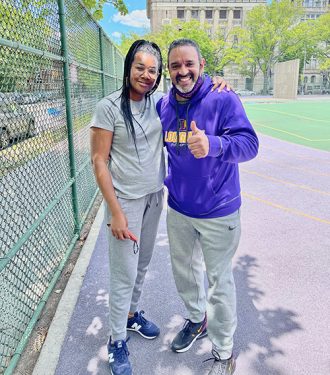 It turns out Gonzalez suffered a ruptured cerebral aneurysm. After emergency surgery, he spent two and half months in the hospital where he had to relearn basic human functions. His successful recovery is ongoing, as he’s continuing his therapy and staying relaxed now that he’s back coaching.

Gonzalez — Bishop Loughlin’s director of admissions who has coached basketball at the school for more than a decade — said he was nervous before his first game back. There were a few instances where he got a bit excited, yet luckily, he gave his student managers special instructions to remind him to always remain calm when he gets heated.

“I’m a competitor,” said Gonzalez, who has coached the Lions to three Brooklyn-Queens titles and four appearances in the city championship final game. “But right now my health is what’s most important.”

In addition to learning the lesson of staying calm on the basketball court, Gonzalez’s journey also taught him that he can serve as a source of hope for people going through a similar experience.

His good friend, Anton Marchand, reached out after his wife, Danielle Robinson, suffered a stroke just a week after giving birth to their son, Hendrix, in late August 2020. Marchand played basketball at Bishop Loughlin from 1984-1988, so he knew of Gonzalez’s inspiring story of recovery.

Robinson, a graduate of Nazareth H.S., East Flatbush, spent 47 days in the hospital and in rehabilitation. Just like Gonzalez, she’s on her way to a full recovery, though just like the coach, it will take time, patience, and perseverance.

“I had no experience handling anything like that,” Marchand said. “During the whole process, I reached out to Ed and his wife, Joyce. They were excellent. They helped me because I had no knowledge of what was going on and they had just been through it. Just talking to them gave me a sense of security.”

Each week at Bishop Loughlin, Gonzalez works with Robinson on strengthening drills based on his own recovery. He’s a positive influence, and his vibrant, energetic style gives Robinson the motivation she needs to continue striving toward her goal of getting better.

“You wouldn’t know what happened to me unless I tell you what happened,” Gonzalez said. “Not many people are as lucky as Danielle or myself to recover from this type of injury. At one point, I had to learn to walk again, not to mention the struggle I had just sitting up straight on my own. Due to my personal experience, I can relate to Danielle’s recovery and take pride and joy in sharing my therapy techniques to help improve her status as best I can.”

Gonzalez is living proof that once you’re a coach, you’re always a coach. Coaching Robinson through exercises has been a way for Gonzalez to take advantage of the second chance he’s been given. He intends to continue to spread awareness on traumatic brain injuries and work with others who were also given that second chance in life.

“He’s (Gonzalez) coaching Danielle like he’s coaching a game,” Marchand said. “I sit back and let him do what he does. I’ll never be able to repay him for what he’s doing for my wife and for what he did for me during that period. I don’t know what I would have done without him and his wife.”

Just like Gonzalez has had a successful career on the basketball court, he’s now able to use his experience overcoming a brain aneurysm to be successful in this next chapter of his life: creating positivity for others who are on their own road to recovery.