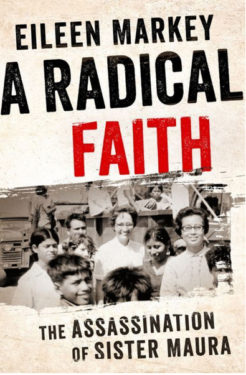 Eileen Markey’s new book, “A Radical Faith: The Assassination of Sister Maura” (New York: Nation Books, 2016, pp. 336), is a beautiful and eye-opening depiction of a Maryknoll Sister from the Brooklyn Diocese who was brutally murdered, assassinated really, in El Salvador on Dec. 2, 1980. There were three other American women horribly killed with her: Ita Ford, also a Maryknoll nun from Brooklyn, Jean Donovan, a laywoman missionary volunteer from Connecticut, and Dorothy Kazel, an Ursuline nun from Cleveland.

Mary McCloskey, Maura’s mom, was from County Antrim, Ireland. After various experiences as a young woman, she studied nursing in Dublin. Maura’s dad, John, was born in Sligo. He had been involved with the Irish Republican Brotherhood, and then the IRA.

In 1922, when Irishmen were fighting each other in Dublin, John brought a wounded comrade to a convalescent home. Mary McCloskey was the nurse who admitted them. That was the day she met John Clarke. They married in New York in 1930. Maura was the first of three children. James, (“Buddy”) was born in 1934 and Julia (“Judy”) was born in 1935.

Her family moved to Rockaway in 1934. She attended St. Camillus and St. Francis de Sales elementary schools and graduated from Stella Maris High School. She entered Maryknoll in 1950.

The book offers a wonderful description of Rockaway “back in the day.” Some of The Tablet readers probably have their own fond memories of going to the beach. This is how the author captures a moment in time (and take note of the closing words of this quotation):
“Summer visitors poured in from the rest of New York City from June to September, filling the narrow peninsula with music and crowds and stories loquaciously told. In 1947, when Maura was sixteen, the summer population of the Rockaways was 225,000, more than five times that in winter. …

“Entire families from the Bronx, Manhattan, Brooklyn and Queens relocated for the summer, squeezing into accommodations with shared bathrooms and outdoor showers. … Irish bands made up of fiddler, accordionist and crooner took up residence in such places as Curley’s, Hugh McNulty’s and Allen’s Dancehall. …

“Maura was shaped by this world as much as by her parents and their histories.” (p. 16)

An Understanding of Injustice

This book is a beautiful tribute to the Clarke family: Maura’s parents, her brother and sister. They saved the many letters Maura wrote from Maryknoll, from Nicaragua and from El Salvador. And before the age of computers and email, Maura was a prolific letter writer. During her many years in Central America, she wrote home at least twice a week, sometimes more! She wrote about walking along the beach with her father, who often spoke of his experiences in Ireland. After growing up with those stories, Maura understood that injustice was always to be recognized and resisted. She soon realized that injustice was all around her.Sister Maura Clarke, M.M.  (Photo: Wikipedia)

I encourage the readers of The Tablet to read this book. Sister Maura Clarke’s life was formed and deepened in Rockaway, was enriched in our Catholic schools, was taught by the Sisters of St. Joseph and was blessed by parish priests who are mentioned in the book, including Msgr. J. Jerome Reddy. This Catholic life, lived well, blossomed in the missionary life for 16 years in Nicaragua and four months in El Salvador, and was brutally ended on a deserted road, far from home.

A Different Kind of Missionary

Maura and her companions in life, prayer and death were courageous women helping the poorest of the poor find some dignity and respect. Markey describes the transition of a Rockaway girl who became a martyr for the cause of justice. She went to Central America, learned Spanish, taught catechism to the little ones and eventually saw the need to grow into a different kind of missionary. She started working with the adults, raising consciousness, helping people name the causes of the extreme poverty in which they were living. Teacher and students learned together. This was a pedagogy of oppressed people. It was also dangerous work.

Jean Donovan, the lay missionary who was murdered with Maura and Dorothy and Ita, wrote this reflection in a letter home the week before she died:

“The Peace Corps left today and my heart sank low. The danger is extreme and they were right to leave. … Now I must assess my own position, because I am not up for suicide. Several times I have decided to leave El Salvador. I almost could, except for the children, the poor, bruised victims of this insanity. Who would care for them? Whose heart could be so staunch as to favor the reasonable thing in a sea of their tears and loneliness. Not mine, dear friend, not mine.”

The Catholic Church went through enormous changes during the Second Vatican Council, and the “Pastoral Constitution on the Church in the Modern World” was one of the documents published by that council. The opening words were: “The joy and hope, the grief and anguish of the men and women of our time, especially of those who are poor or afflicted in any way, are the joy and hopes, the grief and anguish of the followers of Christ as well.”

The power of those words began to flow throughout the Church all around the world. Shortly after the Council, the bishops of Latin America began to hold conferences addressing the terrible conditions of millions of poor people who were being exploited by the upper echelons of society. Pope Francis, who was a Jesuit priest in Argentina at the time, participated in those conferences and was changed in the process. Today, he reminds us to “accompany” those who are suffering from external violence or internal conflicts of conscience.

Missionaries from the United States were affected also. The America government was ready to combat Communism in Cuba and Central America. That vision abetted our military and diplomatic decisions to train and arm anti-Communist governments anywhere in the world. The results were sometimes tragic. On an early December night in El Salvador almost 37 years ago, it was four American women who died.

This book is about all of us and our search for dignity and truth and honesty.

Dear Sister Maura, thank you. May you rest in peace.

Msgr. Geraghty lived on the Rockaway Peninsula for 18 years while serving as pastor of St. Francis de Sales, Belle Harbor. He is the pastor emeritus of St. Robert Bellarmine parish, Bayside.