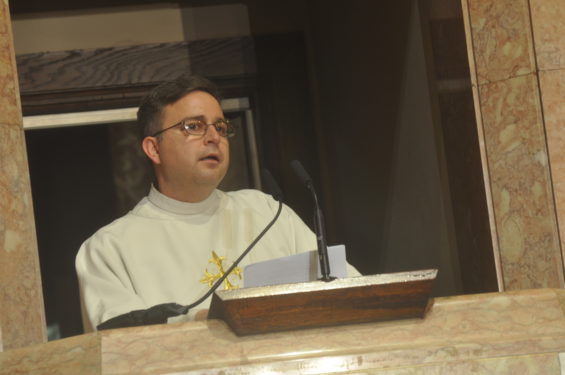 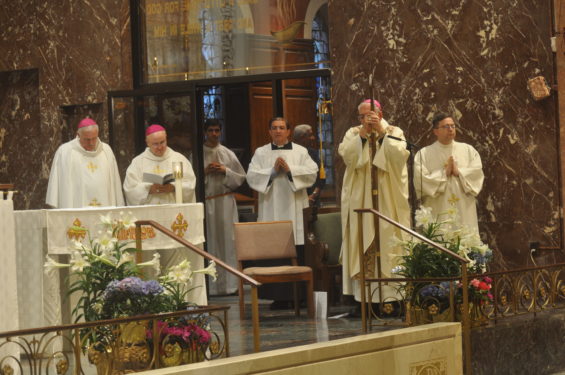 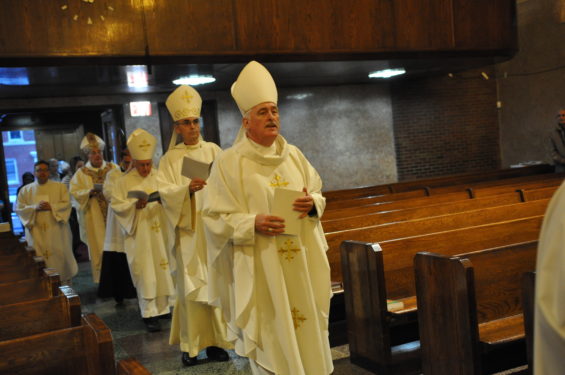 “The scandal is NOT over,” said a survivor of clergy sexual abuse at the Brooklyn Diocese’s annual Mass for Hope and Healing.

“As long as a survivor shakes with anxiety, the scandal is not completely over.

“As long as a family struggles with faith due to this, the scandal is not over.

“As long as people wake up in the darkness of the night with nightmares, the scandal is not over.

“As long as good and holy priests who give their lives to the Church are lumped together with the guilty, the scandal is not over.

“As long as I personally watch victims stumble through the streets of my parish self-medicating themselves to death with alcohol this scandal is NOT entirely over.”

Deacon Philip Franco preached these words in his homily at the liturgy celebrated April 26 at St. Anselm’s Church, Bay Ridge. It was the third straight year that Bishop Nicholas DiMarzio celebrated the Mass with victims of sexual abuse.

The event is held at the request of the survivors support group that meets under supervision of the diocese’s Victims’ Ministry coordinated by Jasmine Salazar.

Joining Bishop DiMarzio on the altar were Auxiliary Bishops Raymond Chappetto, James Massa, Paul Sanchez, and Neil Tiedemann, C.P., and about 35 priests and deacons from Brooklyn and Queens.

Among the 200 participants were survivors, their families and friends and members of various diocesan offices.

Deacon Franco applauded the efforts of the diocese and he thanked the bishop and members of the assistance committee for their “unconditional support.”

He spoke about the light in the midst of the darkness of the struggle in dealing with the effects of sexual abuse and assured the members of the congregation that there is hope.

“Christ weeps for you but He will also raise you,” said Deacon Franco. “Come forward. Speak to someone. Let the darkness out and let it be replaced by the light of Christ.

“It’s a dark, slow and uneasy walk. But let Christ into your life. Like in the Gospel tonight, He will, like He did for Lazarus, unbind you and set you free.”

Bishop DiMarzio, who also praised the work of the Victims’ Assistance Ministry, said “we stand as one Church in the hope that Christ is the Healer. He will give us a new lease on life.”

Following Communion, Tara Franco, the deacon’s wife, spoke about her “journey from darkness into light as the wife of a survivor.”

She said there had been “very difficult times,” but the healing began when her husband “shared his story with his family,” and confronted his abuser, who eventually was removed from the clerical state while serving in another diocese.

She also applauded the support of the diocese and family but “I always felt that something was missing.”

She sought a more spiritual healing and it was then that the Francos reached out to diocesan officials and asked for things such as support groups and the annual healing Mass.

She said that there is a prayer group for survivors and hopes to eventually begin such a group for spouses of survivors.

She urged those who had been abused to come forward and speak to members of the assistance committee.

“Let us walk with you towards the light,” she said.

Anthony Hughes said that as a survivor he comes to the Mass because “it brings us a little closer to Jesus. Never underestimate the power of prayer.”

Bishop DiMarzio has said that while many people were abused by a small number of priests, there have been no new active cases in at least seven years.

The Victims Assistance Ministry can be contacted at 718-623-5236 or at vacministry@diobrook.org.