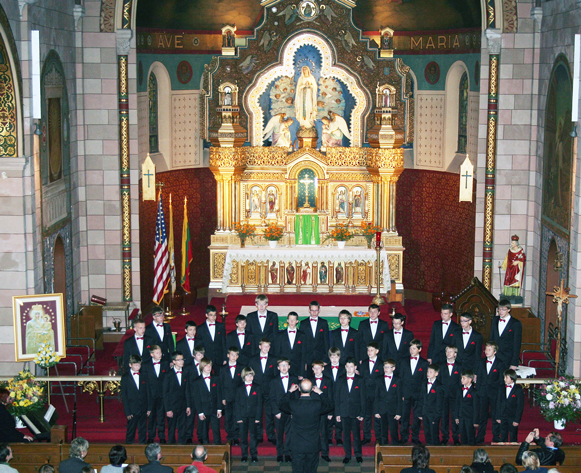 On Nov. 5, parishioners of Annunciation Church in Williamsburg, were treated to a performance by the internationally acclaimed Boys’ Choir of Lithuania, “Dagilelis.”  The choir’s concert at Annunciation was part of its U.S. tour that included performances at the United States Capitol and the United Nations. The Boys’ Choir of Lithuania has received prestigious awards and honors worldwide, performed at major musical venues, appeared on radio and television and recorded professionally. Choir director Remigijus Adomaitis and the members of the choir were greeted by Annunciation’s administrator, Msgr. Joseph Calise, by Lithuanian Consul General Valdemaras Sarapinas and by the Lithuanian community of Annunciation parish.  The concert program consisted of selections of liturgical works (Faure’s “Pie Jesu”), traditional Lithuanian compositions (Ciurlionis’ “Song of Songs”) as well as creative interpretations of American popular music (Weis’ “The Lion Sleeps Tonight”).  The choir performed a moving rendition of the “Ave Maria” as a fitting encore.