“Racism is a mindset totally, completely opposed to Jesus,” said Pamela Perkins, one of the participants at the Diocese of Brooklyn’s fourth Listening Session on Racism held at the Holy Family parish in Fresh Meadows, on Saturday, Dec. 8.

The sessions were organized by the diocesan Commission on Racism and Social Justice, a group chaired by Auxiliary Bishop Neil Tiedemann, C.P. Listening sessions were held in June at St. Francis of Assisi-St. Blaise, Crown Heights, and St. Clare, Rosedale, and then a deanery-level meeting was held in October at St. Mark, Sheepshead Bay.

Bishop Nicholas DiMarzio, who formed the commission after the tragic events in Charlottesville, Va., last year, participated in this fourth session.

“This is the original sin of America,” the bishop said, again affirming the statement he made at a prayer service after the events in Charlottesville.

Acts and Attitudes of Hate

During the summer of 2017, hundreds of white supremacists gathered on the campus of the University of Virginia. The following day, violence exploded in the city when neo-Nazi militants clashed with counter-protestors. A young counter-protester, Heather Heyer, was killed when a car was deliberately driven into the crowd of counter-protestors. James Alex Fields, the Ohio man at the wheel, was convicted Friday, Dec. 7, of first-degree murder.

Following the agenda of previous sessions, the event started with a brief introduction by Father Alonzo Cox, secretary of the commission and coordinator of the Vicariate of Black Catholic Concerns for the Diocese of Brooklyn.

Bishop Tiedemann followed Father Cox with a reflection about racism. “As a society and as a nation,” he said, “we have experienced a great deal of racial violence and discord. The ugly sin of racism has significantly affected the lives of so many of us.”

He added that after the events in Charlottesville, the United States Conference of Catholic Bishops (USCCB) established a committee to address racism. He quoted the recent pastoral letter released by the Bishops’ Conference during its meeting in Baltimore, Md., last month:

Bishop Tiedemann concluded: “This is our fourth listening session, once again we want to look at our church and our diocese to discover and learn from your experiences of racism.”

Father Cox then invited participants to form three small groups to discuss several questions about racism. Before the group sessions, Father Cox shared a personal experience he had at the first parish where he was assigned after his ordination, St. Clare parish in Rosedale, which today is a predominantly African-American parish.

“After my first two weeks at St. Claire, I visited an older person who was homebound,” he said. The old parishioner was white, as the majority of the community in St. Clare was during the 1950s and 1960s.

“As we were sitting at her dinner room table while we were having tea she made a comment to me,” Father Cox recalled. “She said, ‘You know, Father, when I was in St. Clare in the Fifties and Sixties, a priest like you wouldn’t be welcome there.’ And I said to her, ‘A priest like me? Why?’ And she said, ‘Well, Father, you know you are black. Come on!’”

After the attendees were divided into three groups for a working lunch, they shared their own stories about racism in the Church and society at large. 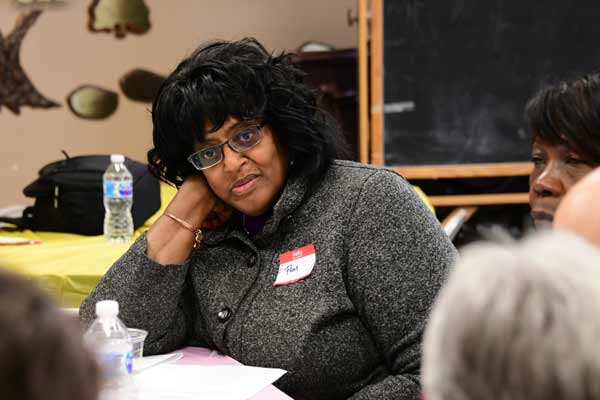 Pamela Perkins told her group about an experience she had when she was 9 years old as a fourth grader at a Catholic school in Brooklyn. “The school at that time was pretty mixed, half and half white kids and black kids,” she said.

One day, one of the nuns asked all white kids to get out of the classroom and then she said to the African American girls: “You should be grateful that you are here, but you not belong here because you are going to do nothing but to grow up to be maids.”

Later, Perkins said, a white friend from the school told her that same day the nun had told the white kids they were not supposed to be friends with African Americans, using a racial slur to describe them. “Since that day,” Perkins said, “we were not friends anymore.”

The deacon explained that the commission’s goal was to hear from the faithful “how racism has impacted your life and the life of the Church here, in the Diocese of Brooklyn.”

Asked about the fruits of these sessions, Deacon Hart said, “We don’t know yet. At the commission, we will have to discuss where we go from here.”

Commenting about this fourth session, he said, “One of the things that is different about this [session] is that most of the people here are not black, so the commission will get a different perspective as to how people were affected by racism.”

Bishop DiMarzio, who listened to all the testimonies during the three-hour session, didn’t speak until the very end. He explained to participants the history and goals of the commission he created last year.

While people are aware that racism exists in society, Bishop DiMarzio said, sometimes people don’t realize its presence inside the Church. The commission, he explained, was created to see what “we can we do within the Church so people are aware and we can move away from it.”

The commission will speak at the pastors’ meeting this spring, the bishop said, to implement the results of the listening sessions and the guidelines of the USCCB pastoral letter.

“We are probably one of the most diverse dioceses in the country,” Bishop DiMarzio said. “We have to talk to everybody to see how they see it. The next step is to talk with our immigrant groups to see how they experience [racism]. Within the Church we can do a lot more than perhaps the whole society can do. We know we have the Gospel to guide us.”

Asked why there is still racism in the Church, Deacon Hart said, “Because we are all sinners and we don’t do what Jesus told us to do. …

“Racism is often misunderstood. They don’t understand what racism does to people. People don’t accept that they are racist. If you ask them they will say they are not racist. But then by their actions you see that’s not true. If we’d follow the teachings of our Lord, we wouldn’t have any problems, but that won’t happen until He comes back, right?”

One thought on “Listening Session Addresses ‘Original Sin of America’”