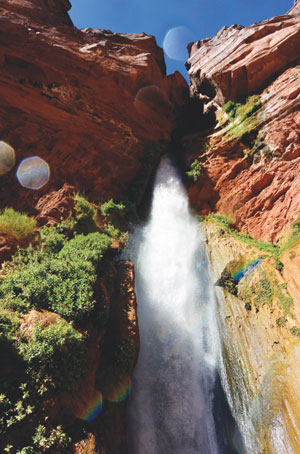 Vatican City – The following text offers an overview of the 191 pages of the encyclical Laudato si’ and its key points, along with a summary of each of its six chapters (“What is happening to our common home,” “The Gospel of Creation,” “The human roots of the ecological crisis,” “Integral ecology,” “Lines of approach and action” and “Ecological education and spirituality”). The Encyclical concludes with an interreligious prayer for our earth and a Christian prayer for Creation.

“What kind of world do we want to leave to those who come after us, to children who are now growing up?” (160). This question is at the heart of Laudato si’ (May You be praised), the anticipated Encyclical on the care of the common home by Pope Francis. “This question does not have to do with the environment alone and in isolation; the issue cannot be approached piecemeal.”

This leads us to ask ourselves about the meaning of existence and its values at the basis of social life: “What is the purpose of our life in this world? What is the goal of our work and all our efforts? What need does the earth have of us?” “Unless we struggle with these deeper issues – says the Pope – I do not believe that our concern for ecology will produce significant results.”

The Encyclical takes its name from the invocation of St. Francis, “Praise be to you, my Lord,” in his Canticle of the Creatures. It reminds us that the earth, our common home “is like a sister with whom we share our life and a beautiful mother who opens her arms to embrace us.” We have forgotten that “we ourselves are dust of the earth; our very bodies are made up of her elements, we breathe her air and we receive life and refreshment from her waters.”

Now, this earth, mistreated and abused, is lamenting, and its groans join those of all the forsaken of the world. Pope Francis invites us to listen to them, urging each and every one – individuals, families, local communities, nations and the international community – to an “ecological conversion,” according to the expression of St. John Paul II. We are invited to “change direction” by taking on the beauty and responsibility of the task of “caring for our common home.” At the same time, Pope Francis recognizes that “there is a growing sensitivity to the environment and the need to protect nature, along with a growing concern, both genuine and distressing, for what is happening to our planet.”

A ray of hope flows through the entire Encyclical, which gives a clear message of hope. “Humanity still has the ability to work together in building our common home.” “Men and women are still capable of intervening positively.” “All is not lost. Human beings, while capable of the worst, are also capable of rising above themselves, choosing again what is good, and making a new start.”

Pope Francis certainly addresses the Catholic faithful, quoting St. John Paul II: “Christians in their turn ‘realize that their responsibility within creation, and their duty towards nature and the Creator, are an essential part of their faith.’” Pope Francis proposes especially “to enter into dialogue with all people about our common home.” The dialogue runs throughout the text and in chapter 5 it becomes the instrument for addressing and solving problems. From the beginning, Pope Francis recalls that “other Churches and Christian communities – and other religions as well – have also expressed deep concern and offered valuable reflections” on the theme of ecology. Indeed, such contributions expressly come in, starting with that of “the beloved Ecumenical Patriarch Bartholomew,” extensively cited in numbers 8-9.

On several occasions, then, the Pope thanks the protagonists of this effort – individuals as well as associations and institutions. He acknowledges that “the reflections of numerous scientists, philosophers, theologians and civic groups, all […] have enriched the Church’s thinking on these questions.” He invites everyone to recognize “the rich contribution which the religions can make towards an integral ecology and the full development of humanity.”

The itinerary of the Encyclical is mapped out in n. 15 and divided into six chapters. It starts by presenting the current situation based on the best scientific findings available today, next, there is a review of the Bible and Judeo-Christian tradition. The root of the problems in technocracy and in an excessive self-centeredness of the human being are analysed. The Encyclical proposes an “integral ecology, which clearly respects its human and social dimensions,” inextricably linked to the environmental question.

In this perspective, Pope Francis proposes to initiate an honest dialogue at every level of social, economic and political life, that builds transparent decision-making processes, and recalls that no project can be effective if it is not animated by a formed and responsible conscience. Ideas are put forth to aid growth in this direction at the educational, spiritual, ecclesial, political and theological levels. The text ends with two prayers; one offered for sharing with everyone who believes in “God who is the all-powerful Creator,” and the other to those who profess faith in Jesus Christ, punctuated by the refrain “Praise be to you!” which opens and closes the Encyclical.

Several main themes run through the text that are addressed from a variety of different perspectives, traversing and unifying the text: the intimate relationship between the poor and the fragility of the planet, the conviction that everything in the world is connected, the critique of new paradigms and forms of power derived from technology, the call to seek other ways of understanding the economy and progress, the value proper to each creature, the human meaning of ecology, the need for forthright and honest debate, the serious responsibility of international and local policies, the throwaway culture and the proposal of a new lifestyle.

Chapter One: WHAT IS HAPPENING TO OUR COMMON HOME

Chapter Two: THE GOSPEL OF CREATION

Chapter Three: THE HUMAN ROOTS OF THE ECOLOGICAL CRISIS

The complete text is available at vatican.va.

4 thoughts on “Laudato si’ : A Study Guide and Summary”