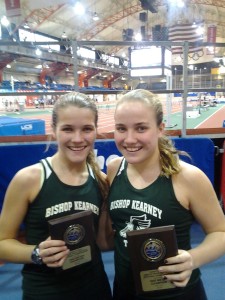 Tessy won the 3000-meter run, while Jackie won the 1500-meter with a time of 5:04 — setting a Kearney varsity school record in the process.

Colleen Gallagher,cousin of Jackie and Tessy, broke the Kearney freshman record for the 1000-meter run at the same event.