Kinmel Williams, second from right, a seventh grader at Corpus Christi School, Woodside, was baptized and received First Communion at a school Mass on Ascension Thursday. Father Peter Gillen, pastor, officiated. Kinmel’s sponsors were Jennifer Gallina, his seventh grade homeroom teacher, and Alex Salerno, the eighth grade teacher. His classmates and Robert DiNardo, principal, also participated in the liturgy. Kinmel, who has attended Corpus Christi since pre-k, informed Father Gillen earlier in the year that he wished to become Catholic. As Father Gillen prepared him to enter the Catholic faith, his classmates conducted a countdown to mark the days until he received his 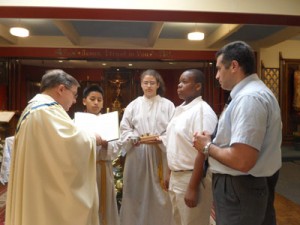