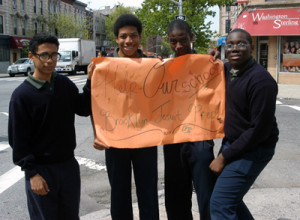 Failure is not an option for the biggest test ever to face the school community at Brooklyn Jesuit Prep in Crown Heights – staying open.
Efforts are underway to secure $1 million to save this Catholic middle school, which has been serving low-income children for nearly a decade.
New York Nativity, a ministry of the New York Province Jesuits, which sponsors Brooklyn Jesuit Prep (BJP), notified the school community in early May that its financial support will end after June 30. Rising costs and declining charitable donations were cited as the cause.
Formerly a three-school network, New York Nativity’s financial situation precipitated the closure of its first school, Nativity Mission Center on Manhattan’s Lower East Side, last year. Lacking funds to sponsor two schools, the Board of Trustees will cease funding BJP and continue to operate the middle school at St. Ignatius School, Hunts Point, the Bronx.
Dr. Michael Yazurlo, New York Nativity president, said the decision is purely financial. “We can no longer raise enough money to support two schools.”
While both schools provide “an excellent educational experience” to the poorest children in their respective communities, he said, “the sustainability of St. Ignatius School is more feasible than Brooklyn Jesuit Prep.”
The reason is that the Jesuits own the Bronx-based school building, which they could potentially monetize. On the other hand, BJP is located in the former St. Teresa of Avila School building, which the Jesuits rent from the Brooklyn Diocese.

Survival Mode
Although the board’s decision won’t be official until May 24, BJP Principal Brian Chap has already moved into survival mode. “We know what we’re up against, and we’re really fighting to become independent,” he said.
Opened by the Jesuits in 2003, BJP provides a rigorous curriculum, an extended school day and a summer leadership camp to fifth- through eighth-grade children from low-income households for a relatively low tuition of $75 per month.
BJP currently serves 102 boys and girls in small, single-sex classes and 40 alumni through its graduate support services.
“We believe education is the great equalizer, and we want to make sure every child has the same opportunity regardless of where they’re from,” Chap said.
To sustain its mission, about 95 percent of the school’s operating revenue comes from individual donors and foundations.
The school is working to secure about $1 million in annual pledges to remain open as a freestanding school, not just for a year but also for the long haul, Chap said.
At the very least, he’d like to raise sufficient funds for the children to enjoy summer leadership camp at Fairfield University, Conn., in July. Through various fundraising efforts, the school is halfway to its $100,000 fundraising goal.
“We’re spreading the word on the very local level,” he said, “but we’re also reaching out to those who have been supporters in the past.”
Among those past supporters are the alumni of Brooklyn Prep, a Jesuit-run high school that served Brooklyn boys for 64 years until it closed in 1972. BJP was named in honor of that institution.
Besides alumni, school officials are contacting charitable organizations, including Futures in Education and the Robin Hood Foundation, for assistance. Parents raised $1,500 through a bake sale, and students conducted a neighborhood walk, distributing school brochures and introducing themselves to local shopkeepers.
Eighth grader Amari Neil took the lead in promoting BJP and asking for donations as he and his peers visited shops along Washington Ave. May 10.
“This school is my life. I wouldn’t be as educated if I didn’t come here,” said Neil, who is headed to Bishop Loughlin M.H.S., Fort Greene, this fall. 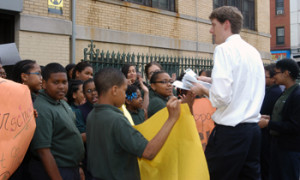 For students who aren’t graduating, the timing of this announcement couldn’t be worse. Lotteries for public charter schools have passed, and their families can’t afford full-tuition Catholic schools. If BJP does not meet its fundraising goals, students will likely return to their local public schools.
Abby Atwell, mother of Imani, a sixth grader, was “heartbroken” when she heard of the potential closure. “She came from a public school with over 1,100 kids, and the kids kind of get lost in the system.
“This school has about 10 kids per class, and they’re all so polite, so disciplined, so well mannered,” she said. “It really is one of a kind in Brooklyn.”
Her daughter Imani says she’s happy at BJP, where classes are small, teachers are helpful and she knows everyone by name.
“This school is something I never experienced before,” she said, “and I don’t want it to end.”

Anyone who wishes to help may contact BJP Principal Brian Chap at 718-638-5884 or chap@brooklynjesuit.org.