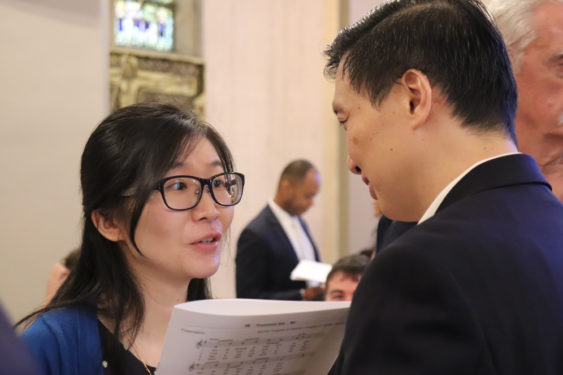 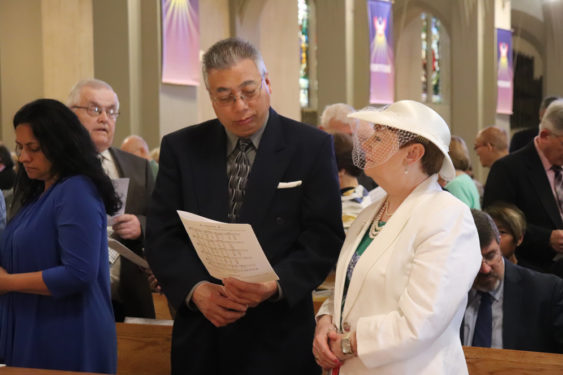 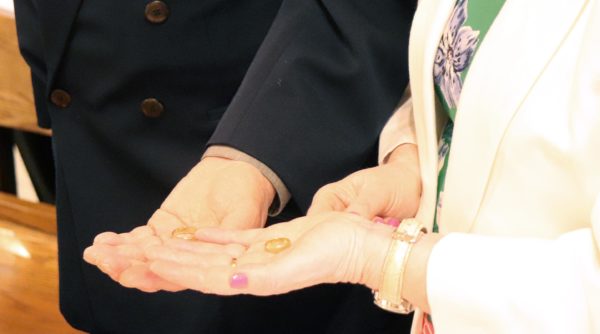 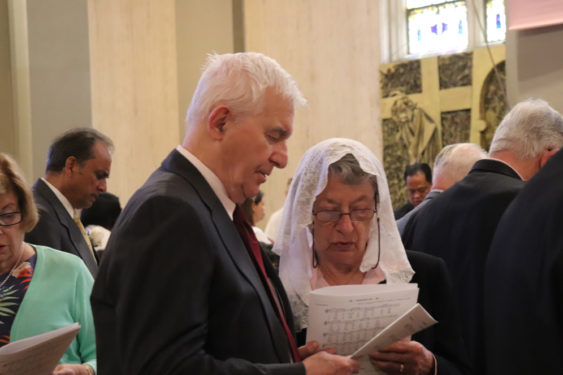 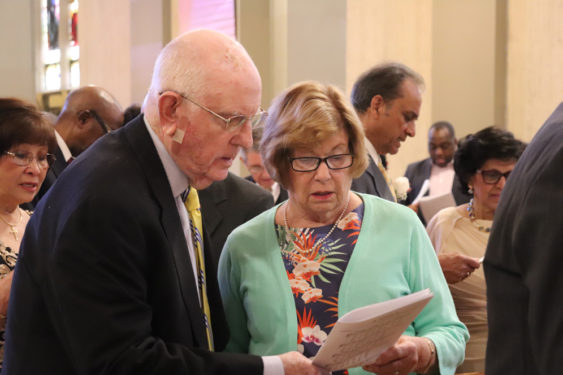 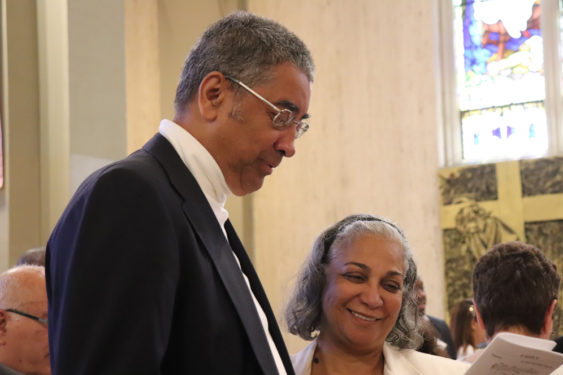 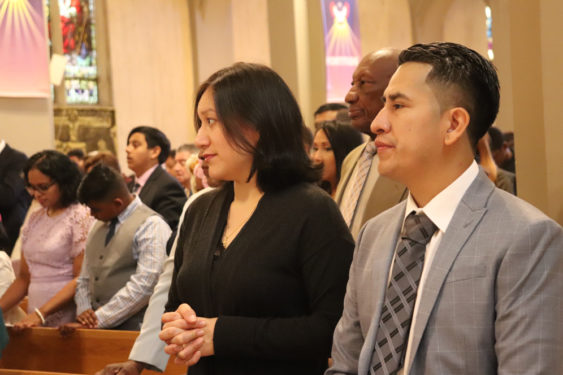 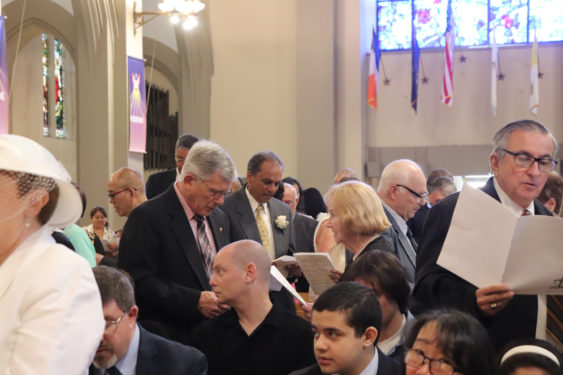 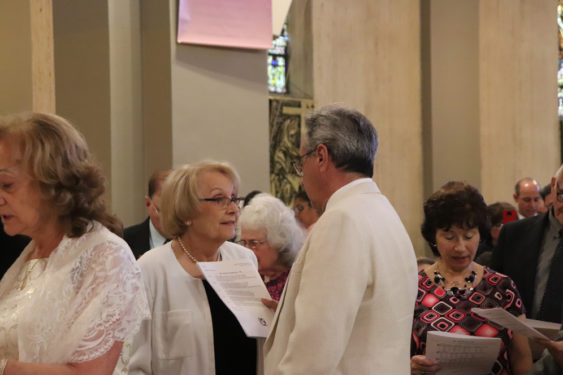 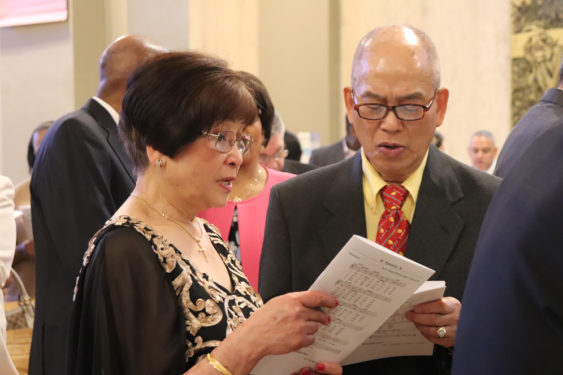 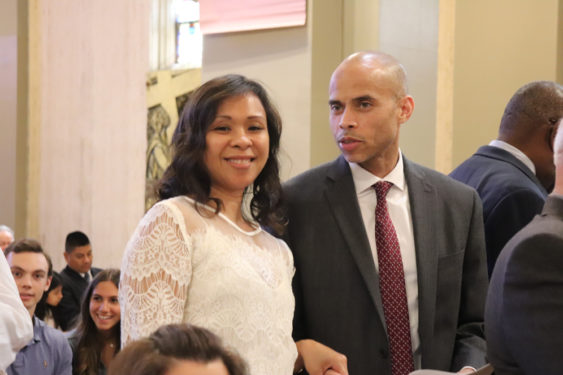 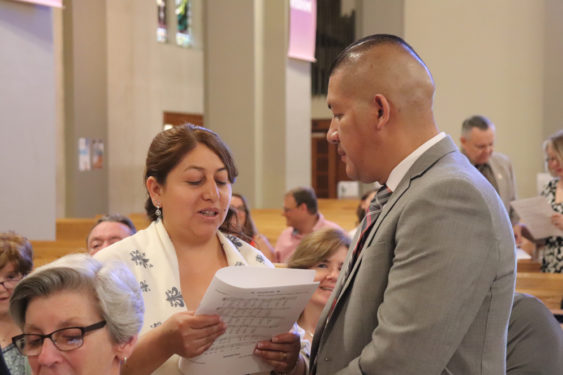 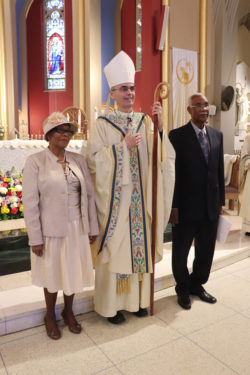 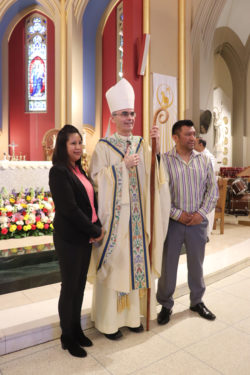 Jim and Angela Clancy have been married for 50 years, and Angela summed up their marriage simply: “Without Jesus you can’t do it.”

She was not being pessimistic. On the contrary, she was glowing with joy as she stood by her husband on line to take a picture with Auxiliary Bishop Pau Sanchez at the annual Diocesan Celebration of Wedding Anniversaries on May 18.

She explained that marriage required each partner to remember to be faithful to the vows they took on their wedding day.

“It’s a journey,” she said. “Just stick together.”

“Thank God and keep growing,” said John Capozucca, alongside his wife, Jean. They were also celebrating 50 years of marriage.

Bishop Sanchez took individual photos with each couple present at the diocesan Mass and celebration at St. Thomas Aquinas, Flatlands. He was also the main celebrant at the bilingual English-Spanish Mass, during which each couple was given the opportunity to renew their vows before the community and their loved ones.

“Thank you for the testimony of your life,” Bishop Sanchez said during his homily. “May the example of your life be an example for all whom you meet … May God watch over you.”

Ted Musco, the diocesan secretary for evangelization and catechesis, thanked all the couples for coming to pray and rejoice together. The 82 couples who attended the Mass represented more than 3,200 years of marriage.

“We pray that you continue to live that vocation to which God has called you,” Musco said.

Lourdes and Roger Archer, who have been married for 20 years, are raising two teenagers. They wanted to come to the Mass to begin their commemoration of their anniversary. They believe that their sacrament and devotion to each other is a force of good for society.

They want to show their children what true love between and husband and wife is. They also want to share that love with anyone else who walks into their lives, especially their children’s friends who may not find themselves in a stable family situation.

Lourdes and Roger said that in general it’s very helpful for young people to see different married couples as examples. They are grateful for their married friends who provide that example for their children.

They both admitted that it’s not easy.

“It’s a lot of work,” Lourdes said. But it’s possible “if you honor your vows and prioritize God first.”

Shirley and Joe Loscano have come to the diocesan celebration for their 25th and 30th anniversary. Now they were back for their 35th.

Shirley said marriage is always hard because it brings two different people together as one, and it is crucial that each partner take care of the other. The Loscanos’ children are all grown and living their own lives. Shirley summarized her married life as this: Two became three, three became four, and four became five. Then five became four, and four became three until, once again three became two.

They love their children dearly and take great joy in them and their granddaughter, but at the end of the day, it is each other that they must hold onto, she said.