As part of the diocese’s Catholic Schools Week festivities, more than 150 Catholic school children of Italian-American descent were recognized with scholarships at an afternoon prayer service at St. James Cathedral-Basilica, Downtown Brooklyn, Jan. 30. 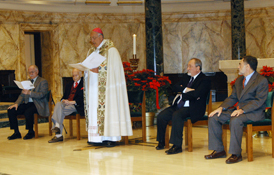 Catholic Schools Week was a fitting time to award these scholarships, made possible by a generous donation from the Tri-State Italian American Congress, announced Bishop Nicholas DiMarzio, who presided over the service and presented certificates to every child.

“This is a very special event because of the generosity of the Tri-State Italian American Congress and its chairman, Judge (Louis) Fusco,” said Dr. Thomas Chadzutko, superintendent for Catholic Schools Support Services, as he welcomed children, their parents and educators to the cathedral-basilica.

Several members of the Tri-State Italian American Congress, including Judge Louis Fusco Jr., president, were in attendance for the award ceremony. 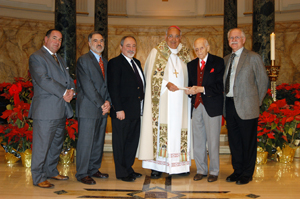 This year, the Tri-State Italian American Congress awarded $80,000 in scholarships to 157 students attending 44 Catholic elementary schools and academies in Brooklyn and Queens. Award monies are given directly to the schools and academies to be applied to the awardee’s tuition for the current school year.

School/academy principals identified eligible students based on their Italian lineage and financial need. Families submitted applications, and final decisions were made by the diocesan Office for Catholic Schools Support Services.

“On behalf of the families and students,” Dr. Chadzutko said, “we express sincere gratitude to the Tri-State Italian American Congress for supporting Catholic education within the Diocese of Brooklyn.”

This is the fifth year that diocesan school children have received scholarships from the Tri-State Italian American Congress, a nonprofit organization dedicated to supporting educational opportunities, organizations and charities benefiting Italian-American youth.

For its continued support, Bishop DiMarzio thanked members of the organization, particularly Judge Fusco, who has been “instrumental in making sure scholarships go to children in Brooklyn and Queens.”

He also recognized the parents present for the support they give and sacrifices they make to send their children to Catholic schools. The bishop also reminded children that their responsibility is “to study as best you can to achieve.” 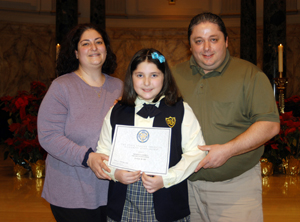 Addressing the children, Judge Fusco assured each and every one that they are very special to him. “I love you all,” he said, tears in his eyes.

His words brought tears to Christine Pronesti, whose daughter Gianna, a fourth-grader at St. Bernard School, Mill Basin, was one of the scholarship recipients. Six students from St. Bernard were among the awardees.

“The judge’s words really touched my heart,” Christine Pronesti said. “When he said, ‘I love you all,’ I broke down. He’s a beautiful person, and this means so much to us.” 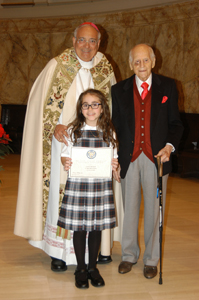 The scholarship, she said, “helps us, helps everybody here. It’s a beautiful thing when people come together to help others.”

Among those boys and girls are siblings, Tyler and Alexa Swetten, who attend fifth and second grade, respectively.

Alexa said she loves her school “because I love to pray,” and Tyler added that he thinks the principal and teachers are the best.

“To be able to give them a Catholic education and to get help doing it means a lot,” said their mom, Michele. “Knowing they can get scholarships because of my heritage is great.”