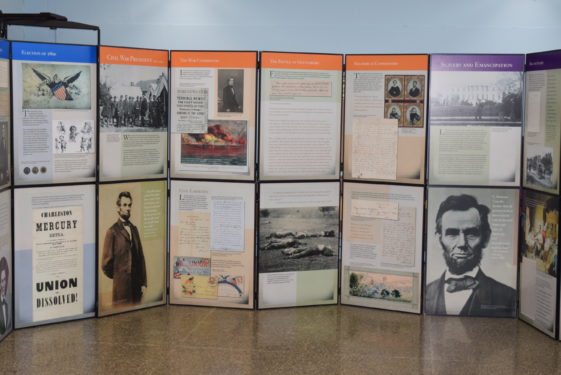 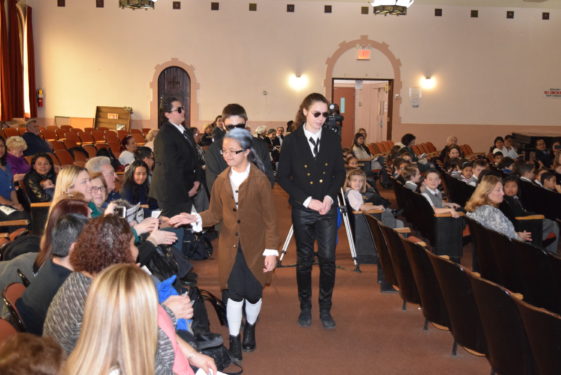 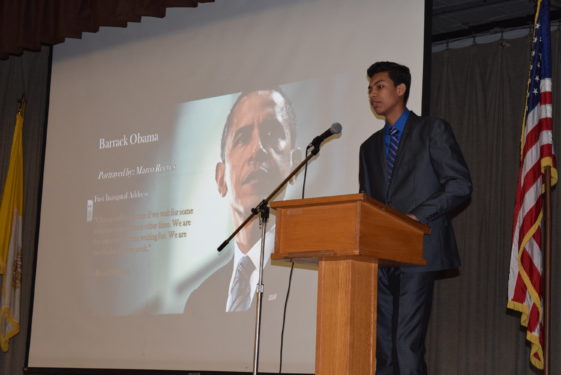 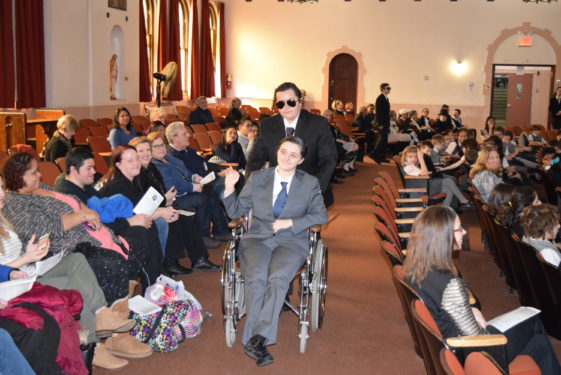 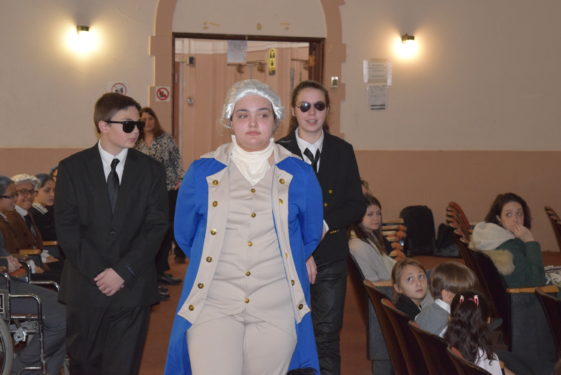 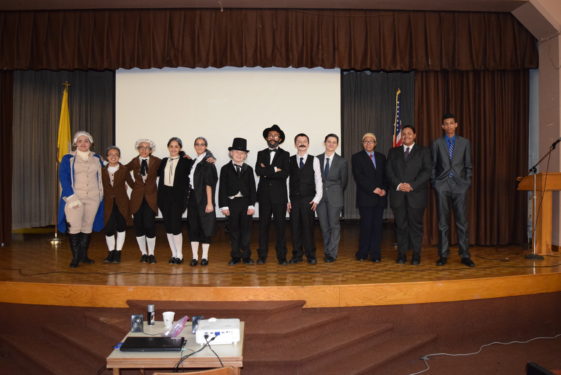 Students there kicked off the school’s observance of Catholic Schools Week with their fourth annual Presidents Exposition.

Members of the eighth-grade class led by their teacher Russell Berry portrayed different U.S. presidents and delivered some of the more iconic speeches in American history.

The “presidents” were even escorted by Secret Service bodyguards as they went through their scripts. In attendance were State Senator Marty Golden and Michael Long, N.Y.S. chairman of the Conservative Party, who serves as chairman of the board of director of Holy Angels Academy.

Many powerful speeches were given including George Washington’s “Farewell Address” by Emily Wiseman and Abraham Lincoln’s “Gettysburg Address” was read aloud by the whole class and audience. Franklin Delano Roosevelt delivered both his Pearl Harbor “Day of Infamy” speech and one of his first fireside chats after the country entered WWII.

Ronald Reagan (Sarabeth Velasquez) relived his Berlin Wall address and even asked a few students up on to the stage to help tear down a cardboard wall. Barack Obama (Marco Reeves) spoke last and the class then wished President Donald Trump and America good luck.

Berry said he was very proud of his students as months of hard work have finally paid off.

“We started preparing back in the first week of school,” he explained. “Their confidence is high and they want to show everyone what they’ve been working on. They know their speeches and they want to make us all proud. They probably know more about their presidents than I or you will ever know. We were lucky that this was an election year because we were able to add it to our discussion and see the entire process unfold.”

The students were able to come together and have their community grow stronger. Nicole Aquino portraying John Adams said, “We started in September and have been working so hard. I am very excited even though we were all very nervous. We bonded as a class through this great experience and learned so much.”

Meaghan DelleCave, who portrayed Franklin Delano Roosevelt in a wheelchair prop added, “It’s a huge relief to have it done but I am so proud of everyone. I learned to appreciate the presidents so much more – what stress they are under. We forget they are real people with real emotions.”

Jose Sanchez as Ulysses S. Grant added, “It was a lot of work but we should all be very proud of ourselves. Everyone did a great job. I had a lot of fun but also learned a lot. I learned a lot about history and grew to love it. Today especially we need to unite as one and do our jobs to always help each other.”

Rosemarie McGoldrick escorted Auxiliary Bishop Witold Mroziewski into the auditorium for the presentation. During his visit to the school he gave a blessing and opening prayer.

On display and open to the public during Catholic Schools Week, Holy Angels also offered a special museum exhibit on the life of the country’s 16th President Abraham Lincoln, provided by the Gilder Lehrman Institute of American History.