On any given Sunday, observing the Sabbath is a choice. For three Hispanic youth who have spent their formative teen years in the youth group at St. Joan of Arc parish, Jackson Heights, they freely choose to attend Mass.

And on a recent Sunday, they also made the choice to approach the ambo after Mass and ask the community for help collecting men’s clothing as part of the youth group’s Restoring Dignity Collection for the Homeless.

These teens are around 18 years old, having just graduated high school or on the verge of receiving their diplomas. They have already received the sacrament of Confirmation – or what many teens see as the age of “Catholic educational enlightenment,” believing that once they are confirmed in the Church, they are no longer obligated to learn more about their faith.

Yet, here they were, on a Sunday afternoon, choosing to be in their parish’s quiet chapel. Why? Well, a big part was God, an even bigger part was the Holy Spirit and the trifecta wouldn’t be complete without Jerry Rodriguez, their youth minister.

In the spirit of service, they were helping Rodriguez with whatever he needed to make the first weekend of the homeless collection a success. Sitting comfortably in a pew together, the teens shared how the youth ministry at St. Joan of Arc has impacted their life for the better. They agreed that their youth minister’s actions and example are what leave a mark in their minds as they continue to grow into the young men God is calling them to be.

“Jerry isn’t just our moderator or teacher in a sense, he’s more like a father to us,” said Marco Contreras, 18, who has been part of the youth group since he was 14.

“Like any other father figure, they show you the ropes, they teach you, they have fun with you. We had a lot of good times here with all our youth group brethren in a sense.”

Growing up in an Ecuadorian household, Marco and his twin brother Jose, know that being a part of the youth group is a positive thing. “We come back here because more of the energy, it’s really a good energy,” Marco said.

“God can do so much for us, but we have to do our own effort as well. Fifty percent is God guiding you, and the other 50 percent is you actually putting the effort.

“Jerry is the one who helps give us the ropes and explains to us the bigger picture, which is God in a sense. We could say this would never have happened if we never got the message from God to come here every week, to come as a community and talk to people and have fun.”

In reality, the chances of hearing someone speak Spanish on the cross streets near the Jackson Heights parish is more common than hearing a bright-eyed young Russian-/Colombian-American teen say that one of his favorite memories was attending the March for Life in Washington, D.C. and learning about the pro-life movement.

But that’s exactly what Camilo Chudin, 17, said when he thought about who inspires him.

“Jerry stands up for that kind of stuff and he tells us why and we listen to him and we try to understand what he says because he’s making sense,” said Chudin. “A big part is Jerry who inspires us because he’s here at youth group.” 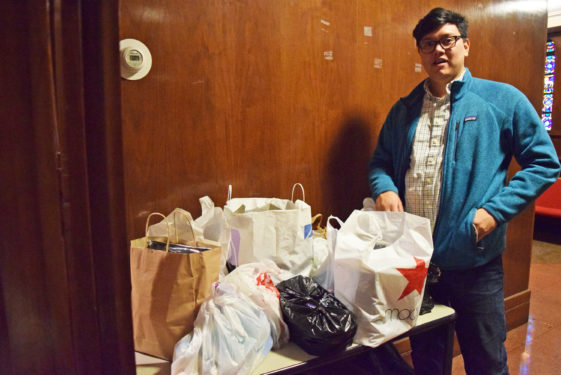 Collectively, whether the young men recalled their favorite memories such as the different youth retreats, or building a bond with like-minded teens who eventually became their brothers in Christ, the fruits of their labor would be useless without the charismatic, passionate and selfless father-figure whom they refer to just as Jerry.

“I never take off during the summer because they’re home,” said the youth minister who once studied to be a priest. Building community beyond parish grounds, he said, is what drives him. He sees that free time as an opportunity to help youth “be happy, healthy and holy while having fun as a youth ministry.”

Leaving his family behind in El Salvador, Rodriguez came to the U.S. when he was 19. Like the missionary chrism of many leaders in the Church, he came to the U.S. captivated by the spirit of Italian priest and patron saint of youth, St. John Bosco and his order – the Society of St. Francis de Sales, or the Salesians.

From age 11, he was involved in youth ministry with the Salesian priests and brothers having had an impact on his life. Their joyful and exuberant example of service to youth sparked his desire to help the young Church, wherever life took him – even if it was 2,000 miles from home.

So how does a young immigrant from Central America end up becoming such a pivotal player in the quest to bring life to the young Church in Queens? Who would initiate such a task that would combine divine intervention, perfect timing and qualified experience? Fairly simple: no task is too challenging for the Holy Spirit.

Rodriguez was literally searching for the next step in his professional journey when he chose to complete the Camino de Santiago, or Way of St. James, a walking pilgrimage in Spain. He had just finished his education in theology and surrendered his path in life to the will of God.

In the middle of nowhere in Spain, he received an email request for an interview from Msgr. Otto Garcia, pastor of St. Joan of Arc parish in Queens. Rodriguez had to pour out all his euros to borrow a computer while God was pouring out His graces. He anxiously responded to the email, unsure what it would lead to, and accepted the request for a Skype interview. That was back in 2014. The rest is church history.

“It was truly a turning point in my life,” said Rodriguez. “If it wasn’t for the  (Catholic Youth Ministry) Initiative, this wouldn’t have been an option. This possibility would’ve never happened. So I’m really thankful for the initiative and especially for God and for all the contributors who help. Their contributions made a change in my life and definitely with these youth that I consider my family.”

“Our goal is by 2020 that every parish in the Brooklyn Diocese will have some sort of youth ministry initiative,” said Pat Daly, director of development for the Catholic Foundation. “Our goal is to empower our youth to live as disciples of Christ in the world today, engage in the life, mission and work of the Church as well as foster each person’s personal and spiritual growth.”

As of September, 90 parishes had a paid youth minister made possible by Generations of Faith, which contained a $10 million allocation to developing youth ministry programs. More than 35,000 people in Brooklyn and Queens have donated to the capital campaign and more than $120 million has been raised to date.

For her, serving others is something Jerry helped to ignite in her heart, fueled by what she already possesses – a love for God and love for others.