By Austen Ivereigh
Special to The Tablet

Pope Francis came to Mexico in the manner of Jonah, to help open a new future for both Church and society, with a call to reject cynicism and to recover the mercy modeled by Our Lady of Guadalupe. Like a fine sword, his message scythed through the undergrowth, honing in, like Lent itself, on the choice the country faces – and by extension, the choice each of us must make.

The focus on the future was relentless. That’s why, contrary to some expert predictions, he never referred to the legacy of the abuse and cover-up of the Legionaries of Christ founder, Marcial Maciel, which is part of the past. Nor did he mention by name the emblematic human rights case of ‘los 43,’ the agricultural students in Iguala, Guerrero who were ‘disappeared’ in 2014. The lack of “specifics,” complained some Mexican columnists, meant that the pope was soft-pedaling.

That was a misreading. The pope spoke very specifically, but never allowed himself to be distracted by the politics surrounding many of these issues.

Very often the pope said a lot even when he said nothing. On his first day, he prayed in silence in Mexico City’s cathedral in front of the Cristo Negro, the “black Christ.” The next day, he prayed – to the despair of Mexico’s live television stations – for a whole 20 minutes in front of the tilma, or sacred cloak, bearing the imprint of Our Lady of Guadalupe. On the third day, Sunday, he listened wordlessly as a teenage girl with terminal cancer in the Federico Gómez children’s hospital sang Schubert’s Ave Maria.

He was silent, too, on Monday Feb. 15, when, on Mexico’s southern border with Guatemala, he prayed briefly at the tomb of the Bishop Samuel Ruiz, the former Archbishop of Chiapas, who like Pope Francis preferred a Church that went out and got hurt than one that stayed in the sacristy. He was silent, too, amidst the din of the youth of Morelia the next day, when he invited two children with Down syndrome to join him on the platform and hugged them warmly.

And he said nothing on his last day, Feb. 17, when he climbed the platform by the Río Bravo in the dry desert town of Ciudad Juárez to lay a wreath of flowers in memory of those who are separated by the border or died trying to cross into Texas.

Those were Pope Francis’ silences, and they spoke louder than his words.

“I went to confirm the faith of the Mexican people,” he recalled in Rome last Sunday, “but at the same time to be confirmed.” He was deeply struck by the faith he had witnessed, and said at the end of Mass in Ciudad Juárez that he had been moved to tears at witnessing so much hope amidst so much suffering.

This was a major part of his message: that the capacity for Mexico’s renewal lies in its own soul, and that its future depended, ironically, on recovering its past, especially the story of Our Lady of Guadalupe’s appearing to the Indian people of Mexico just years after the Spanish conquest.

Pope Francis’ homilies and messages referred constantly to the gift of La Morenita, and to the temptations that held Mexicans back from receiving that gift and forging a better future.

Through La Morenita, he explained at the Basilica, God sought to build a house for all Mexicans, coming close to them in their sufferings. Yet Mexico was also a place of exclusion, and violence, and the cartels.

“I invite you to begin again from that need of a place of rest which wells up from the spirit of your people,” he told the bishops in a lengthy address that invited them to turn away from being distant princes and to nurture their poor.

In the rest of his addresses, he kept pointing to the future embedded in the promise of Mexico, pointing out the temptations and distractions that prevented that future coming about.

To the indigenous people of Chiapas, he recalled the promises of the ancient Maya text, the Popol Vuh. “In the heart of man and in the memory of many of our peoples is imprinted this yearning for a land, for a time when human corruption will be overcome by fraternity, when injustice will be conquered by solidarity and when violence will be silenced by peace,” he told them.

To the clergy and religious in Morelia, he warned of the temptations “that can come to us from places often dominated by violence, corruption, drug trafficking, disregard for human dignity, and indifference in the face of suffering and vulnerability.”

The devil, he said, preached resignation; he wished to persuade them this was how it was and always would be. Yet Mexico’s own history proved that was untrue – as in the story of the great 16th-century Bishop of Michoacán, Vasco de Quiroga, who did so much to rescue the dignity of the Indians. 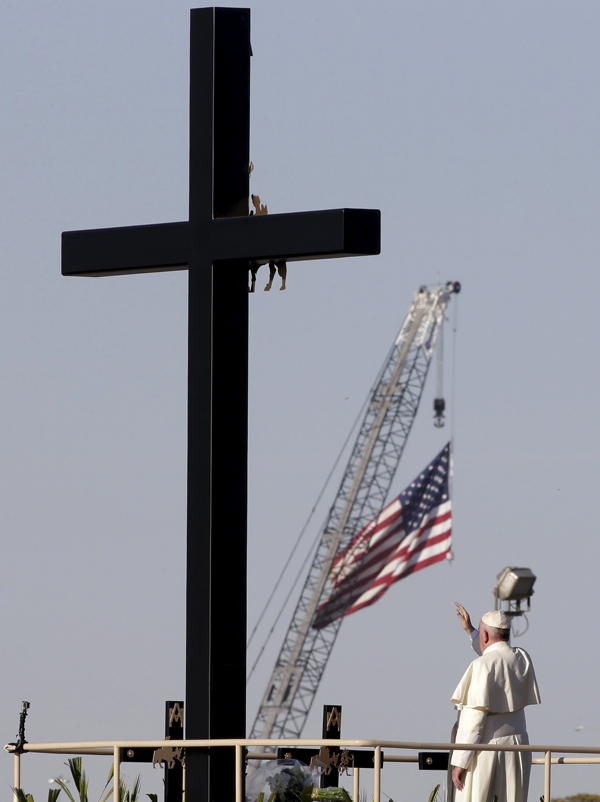 With the young people of Morelia, he invited them to resist the temptation of worthlessness and the false promises of the drug cartels, but to help build family, community and nation.

And in Ciudad Juárez he told prisoners: “You have known the power of sorrow and sin, and have not forgotten that within your reach is the power of the resurrection, the power of divine mercy which makes all things new.

Later, at a Mass for 250,000 at the border, he invited Mexico to weep over injustice, corruption and oppression. Citing the example of Nineveh in the Old Testament, he showed that only when people wept could change happen. Mexico could conquer its challenges. But first, Mexicans must weep for their problems.

“They are the tears that can break us, capable of opening us to conversion,” he said. “No more death! No more exploitation! There is still time to change; there is still a way out, and a chance – time to implore the mercy of God.”

Austen Ivereigh, D. Phil., is a British-based writer, journalist, broadcaster, and the author of “The Great Reformer: Francis and the Making of a Radical Pope.” (Now out in Picador paperback, with new, updated epilogue).