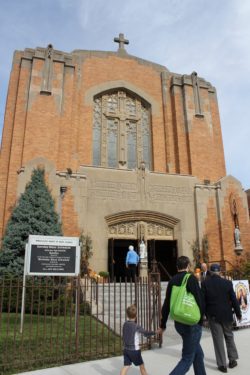 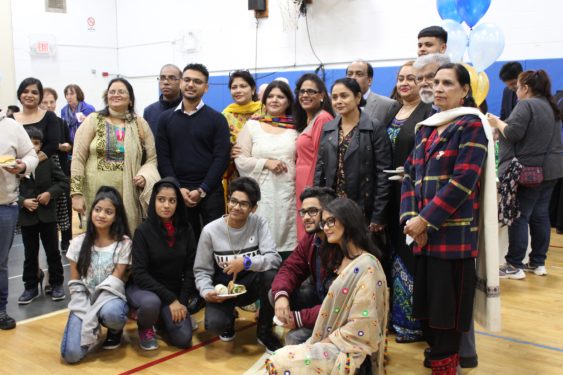 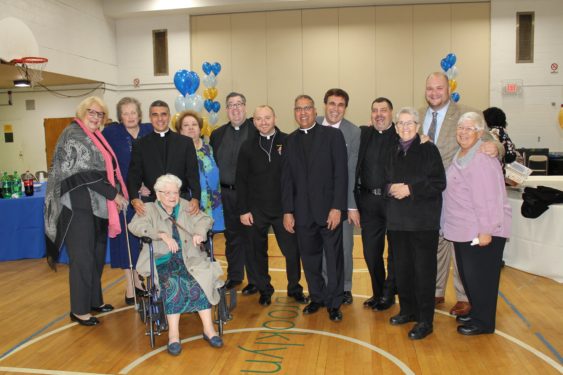 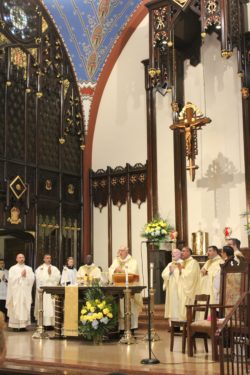 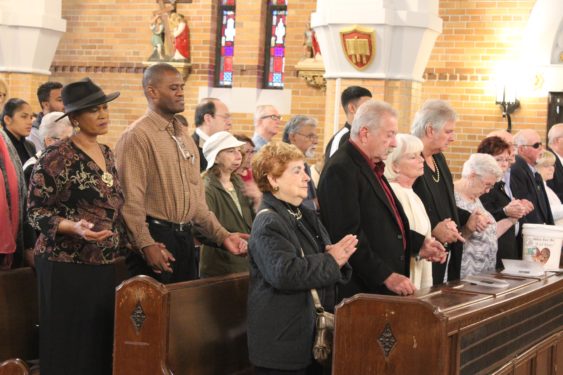 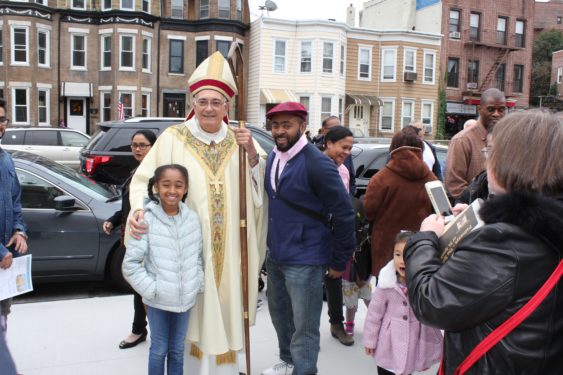 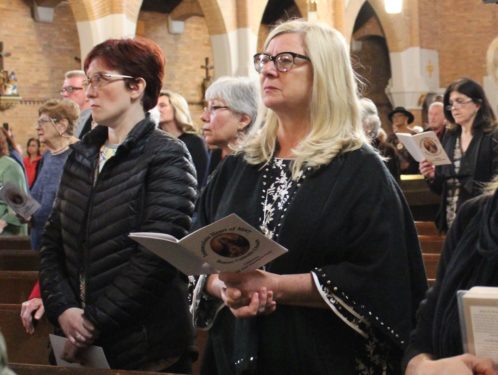 Proclaiming Jesus Christ’s redeeming love in the heart of Brooklyn since 1893, Immaculate Heart of Mary parish is celebrating its 125th anniversary.

Clergy and parishioners, past and present, came together to mark this milestone in their newly renovated church with a Mass of thanksgiving celebrated by Bishop Nicholas DiMarzio.

“This parish has been in existence a long time, bringing people the love of God and preparing them for eternity,” Bishop DiMarzio said. “It is a living church that invites people to come and learn the Word of God. How important that is.”

Petitioned for a Church

Establishing a Catholic church in the Village of Windsor Terrace was indeed important in 1893 when the parish’s founding families petitioned Bishop Charles E. McDonnell for a church.

Father James McAteer was sent to shepherd the growing flock. He celebrated the parish’s first Mass on Oct. 22, 1893 in a rented building at 42 East 5th Street. Two parishioners were baptized that day and a community of faith was born. They had their own wooden, country-style church by the following year.

The rural village was starting to grow more citified at the turn of the 20th century as row houses went up and more Irish and Italian immigrants settled in the parish. Some of their relatives still call the parish home to this day.

Making people feel at home there – and educating children in the faith for over 107 years – have been the Sisters of St. Joseph, Brentwood, L.I.

In 1911, the Sisters arrived to teach Sunday School. Four years later, a parish school opened with the Sisters at the helm. They oversaw the opening of a new building in 1968 and maintained a strong presence in the school until it became part of St. Joseph the Worker Catholic Academy, Windsor Terrace, in 2012.

The former school now houses Brooklyn Prospect Charter School, which has been a blessing for the community by educating youth and providing income for the parish.

Expenses today are not what they were when the present church was built amid the Great Depression. The neighborhood was growing in faith and numbers and the faithful raised $250,000 to finance their house of worship on Fort Hamilton Parkway and East 4th Street.

Built in Art Deco and Gothic Revival styles, the tan-brick edifice was dedicated by Bishop Thomas E. Molloy in 1932. And parish life flourished following the post-war baby boom as families centered their spiritual and social lives around the church and its activities.

More than bricks and mortar, the heart of this community has always been its living stones.

“The building has no meaning unless people come in and share the faith and that’s what the church is,” said Father Ilyas Gill, now in his third year as pastor.

He is proud to lead a vibrant, growing community of several hundred families, a diverse mix of longtime Irish and Italians, alongside newer Hispanic, Polish, Filipino and Pakistani parishioners. The parish is the seat of the diocesan Pakistani ministry and Mass is offered in Urdu every Sunday.

A variety of ministries and groups keep parish life humming and involve the faithful from all walks of life. Parishioners not only serve as lectors, altar servers and extraordinary ministers of the Eucharist, but also take part in the food pantry, sports, scouts, youth ministry, golden age, rainbow, rosary society, spirituality groups, music and consolation ministries.

Open the Doors to All

“If Jesus was here today, He would have opened the doors to everybody,” said Father Gill, and that is exactly what he tries to do.

“We accept everyone and we journey with them, try to give our time to them,” he said. “The people are very good, very generous, very supportive and very open. It is a welcoming community.”

Working closely with Father Gill to evangelize and build community is Sister Mary Ann Ambrose, C.S.J., pastoral associate for more than a decade.

On the weekend before the bishop’s visit, she organized a prayer service at the site of the parish’s first Mass and a symbolic street procession to the current church.

Renovations in honor of this jubilee year have returned the church to the glory of its early days with newly gilded elements, enhanced lighting, reliefs restored to natural tones and more vibrant colors in the sanctuary and main ceilings. Air conditioning was installed in the church and a new Marian Center was created in the rectory. Exterior renovations included repairs to the sidewalk, roof, gutters and leaders.

Funding for this effort came from parishioners’ donations to the diocesan Generations of Faith and Annual Catholic Appeal campaigns; the second collection and Pennies for Mary each week, and rental income from the former school.

Priests who have shared the faith within those walls returned for the Mass. Father Gill welcomed former pastors, Fathers John Costello and Robert Adamo, and two native sons, Father Joseph Fonti, who recently marked his silver jubilee, and Father Robert Mema, who was ordained last year.

Father Francis Obu-Mends, who resides at the parish, was also on the altar with Deacons James Noble, John Cantirino and Antonio Gonzalez, and seminarians Peter Okajima and John Mancuso. Deacon Thomas Devaney, the parish’s first deacon who now ministers in Washington, D.C., was also present.

A highlight of the Mass the music ministry’s performance of the “Parish Hymn of Immaculate Heart of Mary,” directed by Steven Vaughan, music director.

And perhaps no one was more grateful to witness the jubilee Mass than 95-year-old Mary (Mele) Julian, who was baptized in the wood-frame church and watched the current church being built.

“This is my only parish. I have been here from the very first day,” said Julian, who wiped tears from her eyes during Mass. “It’s my life, my whole life.”

She was involved in the parish for all of her life and has only been away since moving to a local nursing home.

“It’s great to be back – to see everybody and everything,” she said, taking stock of the renovations. “Everything is beautiful – just as it was before.”

Julian helped present the offertory gifts at Mass along with Zarnum Younus, 17, who joined the parish with her family three years ago when the Pakistani ministry moved there. She says she felt comfortable in her new church from day one.

“This is my second home,” Younus said. “There are people here from all around the world. It’s really diverse, but we have the same faith and belief.”

That sense of belonging was how Donna Slivoski felt the day she became a lector in 1995. She’d been part of the parish for 20 years, but it wasn’t until then that she felt like “a real member of the family.”

“It really opened so many doors to me,” said Slivoski, who is visually impaired.

Now, she feels Immaculate Heart of Mary Church is more welcoming and inclusive than ever with Father Gill and Sister Mary Ann making a real effort to open the doors to everyone.

As he congratulated parishioners on their anniversary, the bishop encouraged the living stones before him not to sit on their laurels or let their church become a museum. He urged them to continue reaching out to each other and to their neighbors to build up the church.

“Look how beautiful the church is,” the bishop said to rousing applause. “We’re prepared to go out and bring more people in.”

Pastors of Immaculate Heart of Mary