Staff members and students from Martin de Porres school, Springfield Gardens, and youth group leaders of St. Mary Magdalene Church’s Growing In Faith Together (G.I.F.T.) Program, gathered together to experience a night of being homeless.

In total, 22 participants spent 16 hours outdoors without food and shelter.

Throughout the night, they participated in activities to increase their awareness of what it means to be homeless. With cardboard boxes that were provided to them, they had to create their own shelter.

“The experience opened up my mind,” said Eddie Shaw, member of the G.I.F.T. program. “[At least] the cardboard box was a nice insulation [from the cold].”

This was Daniel Bloncourt’s second time participating in a homeless awareness experience. His first time was during his freshman year at St. Francis Prep, Fresh Meadows, at the age of 14. Now 19 years old and a sophomore at St. John’s University, Bloncourt said he still felt an impact from this experience.

“My box was constantly stolen throughout the night,” he said. “I woke up in total pain but I sat down and learned something new again.”

During their time outside, the participants also watched testimonies of Keith Engram, who once worked for Enron earning a high-wage salary, and Ty Hopkins, who was taken away from his mother at the age of eight. Engram and Hopkins spoke about their troubled times when they  seemed to have lost everything.

Engram eventually began living out of his van once the Enron scandal became public. He lost his house, all of his savings, and even some of his friends and family. Hopkins lived with his brother in a group home for a year but still considered himself to be homeless during that time.

The common misconception about homeless people is that they caused themselves to end up like this. Some of the videos the participants watched showed them that not all homeless people are drug addicts, most are people who have lost their jobs and cannot afford the common necessities other people take for granted. 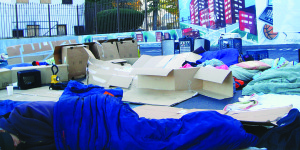 Stefan Phillip, one of the leaders of the G.I.F.T. program, helped coordinate the Homeless Experience.

What a majority of the participants learned that night was to not take anything for granted and to be grateful for the things they have.

Participants now have a fresh perspective on Jesus’ commandment: “Love thy neighbor as thyself.”