This is part of an ongoing series based on NET-TV’s program, City of Churches. 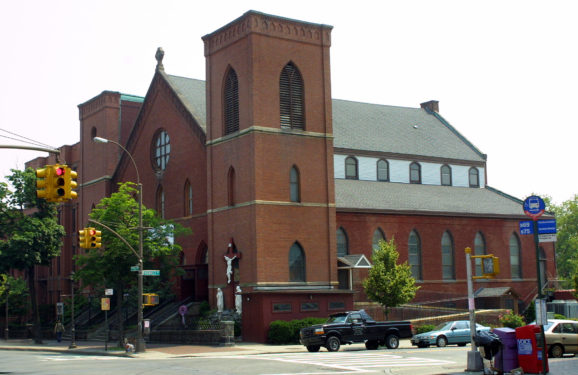 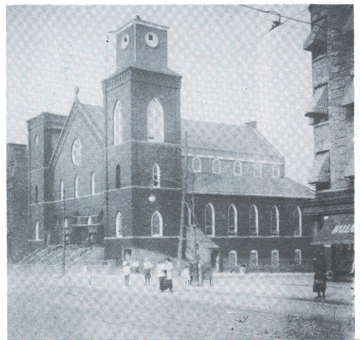 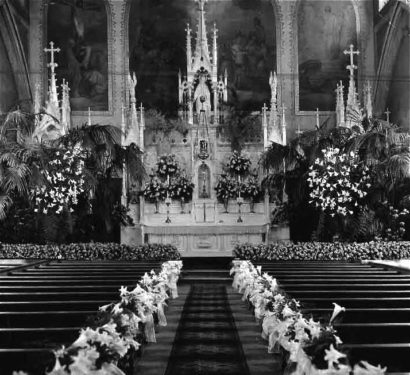 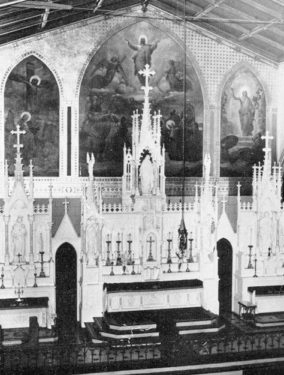 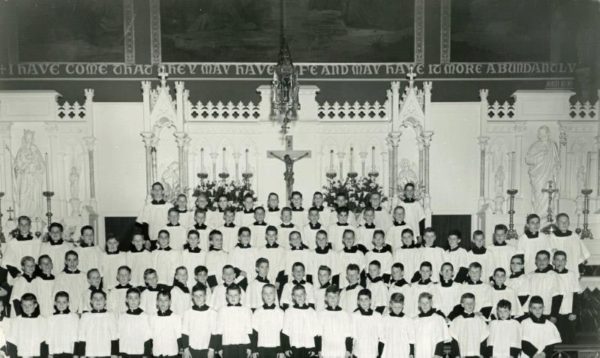 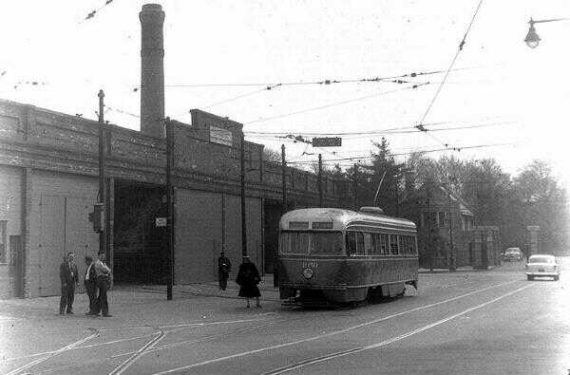 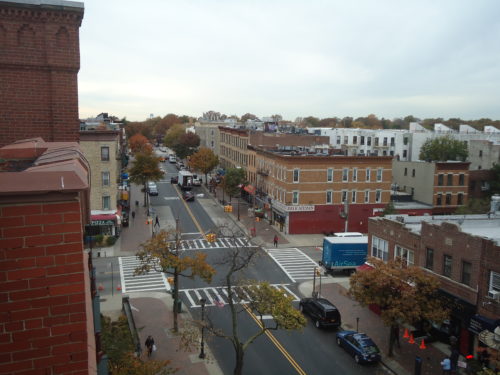 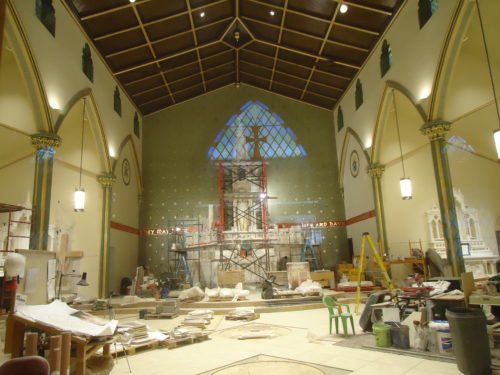 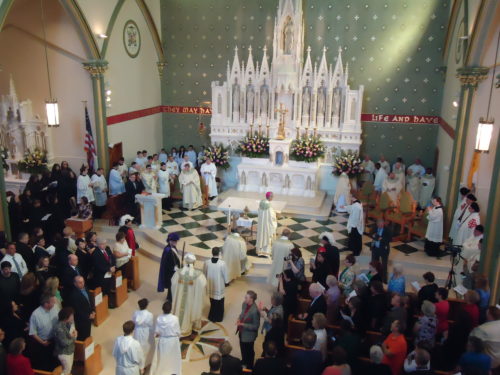 Holy Name of Jesus parish in Windsor Terrace, Brooklyn, was established in 1878 by the first bishop of Brooklyn, John Loughlin. Father Thomas O’Reilly, a native of Ireland, was appointed pastor and the first parish Mass was held in a local stable before a permanent worship site was built.

Originally known as the Church of the Holy Name, the building’s construction was quick, with the cornerstone in place by August and the first Mass celebrated there on Christmas Day of 1878. The outside of the building features Philadelphia brick trimmed with brownstone, and two towers, each 61 feet high.

A 1920s photo, however, reveals an additional structure on top of one of them. Also, what appears to be stained-glass windows in that tower were later replaced or covered by louvered shutters. Inside the church are Gothic-style columns and arches to support the vaulted roof. The original pipe organ is still in working condition, having been upgraded periodically since its installation.

For most of the 20th century, there was a beautiful, handcrafted wooden altar with decorative spires, created by a parishioner who was a carpenter. Three large paintings on the sanctuary wall behind the altar depicted the Crucifixion, the Resurrection and the Ascension of Jesus.

Around 1980, the church was redesigned in an unusual contemporary style that clashed with the original Gothic design. Parishioners expected something more traditional, but the three paintings of Jesus were removed and the large altar was replaced with a much smaller table of sacrifice. Behind it stood seven separate pink structures meant to represent the seven sacraments. That concept was very abstract. (Many people thought they resembled inverted hockey sticks.) A pink paint job on the columns and window frames further confused the look. It was a very modern interpretation for its time but was never fully accepted by most parishioners.

The renovations remained a sore point with many parishioners who were very disappointed at the way their beloved church had changed. It would take 35 years before Holy Name Church would be restored to a more traditional look.

Windsor Terrace is a small neighborhood that still retains a small-town feel, located between Prospect Park and Greenwood Cemetery.

During World War I, many young men from the neighborhood joined the armed services, and some gave their lives. After the war, Holy Name parish chose to remember them in a very public way by planting memorial trees that surround the church to this day.

The gateway to Windsor Terrace is Bartel-Pritchard Square, named after two local heroes who were killed in the war, Emil Bartel and William Pritchard. A memorial plaque to all war veterans was later erected here, as well as a 9/11 Memorial.

Among the local celebrities from this neighborhood are writers Pete and Denis Hamill, as well as science fiction author Isaac Asimov, whose father owned a local candy store on Windsor Place. Singer John Kuse of The Excellents (best remembered for the 1962 hit “Coney Island Baby”) eventually moved here from the Bronx. He still makes appearances at Doo Wop revival shows.

There was no subway service through Windsor Terrace until the 1930s. Public transportation around Brooklyn in the early 20th century was mostly by electric streetcars which remained in use until the late 1950s.

Some of the streetcar lines that ran through Brooklyn terminated at a trolley barn across the road from Greenwood Cemetery. The Diocese of Brooklyn purchased that facility and replaced it with Bishop Ford H.S. in 1962. It was the first of six new Catholic high schools built in Brooklyn and Queens at that time to educate the baby boomer generation.

When Father James Cunningham became pastor of Holy Name in 2012 he asked parishioners what was needed most. Invariably, the reply was to restore the church. He started a building fund and once word got out, contributions poured in and the initial goal was greatly exceeded.

During the subsequent renovation, many important changes took place including the replacement of the rear wall with glass windows, the removal of the seven pink “hockey sticks,” the floor and walls were redone, and parishioners were given the opportunity to request statues of their favorite saints for new shrines.

The renovation took an interesting turn when the Diocese of Brooklyn offered the parish a historic marble altar salvaged from an older church that had been closed for many years.

James Renwick, the noted architect who had designed St. Patrick’s Cathedral in New York City in the 1850s, as well as the Smithsonian Institution building in Washington, D.C., had created a prototype side altar for St. Patrick’s. Although it was ultimately rejected as being too large for the Manhattan church, in 1869 it was dedicated by Bishop John Loughlin as the main altar of Brooklyn’s newly built St. Vincent DePaul Church in Williamsburg. It remained there until that church closed in 2005. Since it was too beautiful to discard, the magnificent altar was disassembled and stored in a warehouse.

When the renovation of Holy Name was being planned, it was offered as a replacement altar because it was similar to the original one that once had graced the sanctuary. Two smaller side altars salvaged from St. Vincent’s were also brought to Holy Name. To support the massive weight of the three marble altars, the sanctuary floor had to be reinforced with several steel support columns installed below in the basement meeting room, also known as Shepherd’s Hall. Afterward, it took several weeks to completely reassemble the original Renwick altar.

The altar and the newly renovated church were rededicated and blessed in 2015 by Bishop Nicholas DiMarzio, who placed relics of Pope Pius X, St. Ignatius Loyola and St. Bernardine of Siena inside the altar.

The gold crucifix on top of the tabernacle has a remarkable story. There is an inscription near the base that reads: “In memory of John and Ellen Gartland by their son, Rev. H.D. Gartland.”

Father Garland was a priest from the Diocese of Newark, N.J., who had grown up in St. Vincent’s parish. In honor of his parents, he donated this memorial crucifix to St. Vincent’s, where his father had served as president of that parish’s Holy Name Society in the 1890s.

It seems appropriate that this aged crucifix found its new home at the ever-changing Holy Name Church.