A Fresh Meadows parish once known to be composed of “the tent people,” celebrated the closing of its 75th anniversary year, sitting in wooden pews with light streaming in from the stained-glass windows.

Bishop Nicholas DiMarzio joined Holy Family parishioners in their celebration and said the physical church illustrates well the spirit of the parish.

“It’s a beautiful church where you can come together with other families,” he said.

“We always look after each other, even if we don’t know names,” she said. “We truly become a holy family.”

She said one of the many ways this is evident is through the parishioners’ care of the school children. Students from the academy attend daily morning Mass and are involved in the parish even after they graduate from the school.

“The parishioners look for the kids,” she said. “It’s our faith lived out here. Not just in school.”

David Dolan, a lay leader for the parish who among other roles serves as an extraordinary minister of Holy Communion, said he sometimes has to suppress tears of joy from his eyes when the children from the school come to receive communion.

“They are so devout,” he said, a pin drop could be heard in the church when the Blessed Sacrament is presented.

David and his wife Carolyn have been part of parish for 35 years. Although they do not have children of their own, they have sacrificed much for the children and the adults of the parish. David said he is inspired by the youth and their parents. Many face difficult situations, such as single mothers trying to provide the best for their children, he said. Therefore, he wants to help them in any way he can.

“It’s a family in every sense of the word,” he said.

“It makes me feel really good to be part of the spiritual community,” Carolyn added.

“They are wonderful people,” he said. “They all love the parish. There are many groups. But they all get along.”

Father Furnari said there are about 1,200-1,300 people who come to weekend Mass.

“It’s so lovely to see families in the church on Sundays,” he said.

Mary Rooney, who lives just three blocks away from the church, said she loves coming to the church with her family. Her parents have been part of the parish since 1964 and had five children. Rooney had five children of her own, now all teenagers. She has already gone to one World Youth Day with her eldest daughter and other teenagers from the parish, and is planning to go again this year with her second eldest.

Rooney said the parishioners all take care of each other in daily ways, such as going shopping for those who have trouble doing it themselves and consoling those who have lost a loved one. 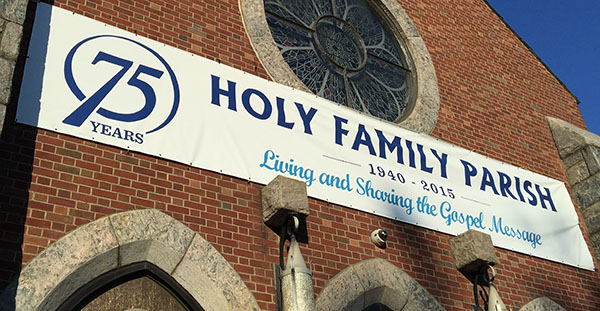 “It’s such a great place,” she said of the parish. “It’s so family oriented. It seems like everyone is one big family.”

David Dolan said one of the ways parishioners show their love for each other is through service in one of the 39 church groups.

One of those groups is the secular Franciscans. It was Father Furnari who brought the group to the parish and it currently has 35 members. The late Auxiliary Bishop Ignatius A. Catanello who was pastor before Father Furnari, was also a secular Franciscan. Bishop Catanello brought the Knights of Columbus to the parish. The council is petitioning the national headquarters to change its name in the bishop’s honor.

“He was a good holy person,” Dolan said of the new patron of his council. “So it was a no brainer.”

The street on which Holy Family now stands was also rededicated in Bishop Catanello’s honor.

Among those who were at the jubilee celebration, were brother and sister Jim and Blanch Morrissey, who were among the original parishioners of Holy Family.

“When I came here, there was a tent,” Jim said.

That tent was the original church structure of the parish. In the 1930s the Fresh Meadows area was transforming from mostly farms to more family homes, where more and more Catholic families were moving in. So, then-Bishop Thomas Molloy sent Father Edmund Carey to establish a parish in the area. Father Carey arranged for the purchase of an entire city block from the Adam Klein farm.

In order to have at least a temporary place to worship, the parishioners of the newly established parish held a card party fundraiser, which yielded enough funds for a tent and 250 folding chairs.

The large army tent was set up where the parking lot is today and the first Mass was celebrated on April 7, 1940.

On Christmas Day that same year, parishioners celebrated in the church building that stands today. Although scaffolding was still up and there were no stations of the cross, no artwork and no wooden pews, parishioners were able to go from tent to church in just eight months.

In order to accomplish such a feat parishioners held fundraisers and gave it their all in dedication.

Jim Morrissey still remembers the founding pastor’s good nature and exemplary values. He remembers Father Carey’s homilies on the Holy Family and he remembers the priest sleeping in his car for a time when he was trying to save all time and resources to build the church.

Father Carey then rented a house to serve as a rectory, in what was to be a temporary solution. However, Morrissey said he remembers the priest wanted to make sure the church had all that it needed before he thought of himself. Father Carey oversaw the building of the school and the convent before building a rectory.

It was the Sisters of St. Joseph from The Mary Louis Academy who came to first give religious education to the children. Parishioners volunteered to drive the sisters from their school in Jamaica Estates to the parish.

The school would have been built soon after, but World War II put a stop to most plans, though not for long.

In 1951, groundbreaking ceremonies for the 16-room school building were held. Two years later, the school was completed and 416 children enrolled. The convent for the sisters, where four Sisters of St. Joseph and one visiting sisters currently live, was constructed in 1958. The priests finally moved into a rectory in 1961.

Having overseen the completion of the parish plant, Father Carey retired in 1967.

Though the parish was finished physically, it would expand its services in the generations to come. As Vatican II brought in a new era for the Church Universal, Holy Family saw the expansion of lay leadership. Female altar servers assisted Mass for the first time on Thanksgiving Day 1994.

Throughout the years, the parish has full heartedly supported diocesan initiatives. The diocesan program, Christ Jesus Our Hope, expanded lay leadership and the school was able to transition to an academy.

Dolan said he is proud of all that his parish has accomplished, however he does not want to call it good enough.

“We don’t ever want to rest on our accomplishments,” he said. “We move to go beyond.”

With the close of the anniversary year, he and Father Furnari both said the parish will now set its sights on implementing the diocesan renewal program ARISE into the parish.

“We want to continue what (our founders) started,” Dolan said.

2 thoughts on “Holy Family Parish at 75”