Raised by the hands of Polish fathers and the prayers of Polish mothers, Holy Cross Church was founded in Maspeth a century ago, and today the parish continues to be a wellspring of Polish Catholic faith, culture and tradition.
Flowers of red and white, the colors of the Polish flag, bedecked the altar as parishioners, clergy and friends gathered for the closing Mass of the centennial year on April 21. Bishop Nicholas DiMarzio was the principal celebrant of the 3 p.m. bilingual Mass in Polish and English.
Pews were filled to capacity as nearly 20 priests processed into church. Special concelebrants included Msgr. Peter W. Zendzian, pastor; Msgr. John J. Strynkowski, former pastor; Msgr. Thomas C. Machalski, rector of SS. Cyril and Methodius Seminary, Orchard Lake, Mich., who grew up in the parish; and Father Witold Mroziewski, incoming pastor.

Loyal Child of the Church
“Poland has been a loyal child of the Church for over 1,000 years,” the bishop said, “and this parish was founded on that loyalty.”
“The fact that our parish has achieved its 100th anniversary is certainly a sign of God’s blessings,” Msgr. Zendzian told the congregation. “It was not always easy for our parish family. There have been many challenges to its establishment and even to its continued life.”
The ninth Polish church founded in the Brooklyn Diocese, Holy Cross was born of a desire by Polish immigrants in Maspeth to have a church of their own and a school for their children.
According to parish records, the founding families met with church officials 26 times before Bishop Charles E. McDonnell answered their petition in August, 1912. These pioneers included Tomasz Machalski, grandfather of Msgr. Machalski.
Father Wojciech Nawrocki, pastor of St. Casimir, Brooklyn, where many Poles were attending Mass and catechism classes, organized the new parish, which held its first services at the nearby parish of St. Stanislaus Kostka, also in Maspeth.

Funded by Pennies and Nickels
Land was purchased and the cornerstone was set June 22, 1913. Funded by pennies and nickels, which Father Nawrocki gathered from every family, the Roman-style church and rectory were erected that fall. The church was dedicated Nov. 30, 1913. 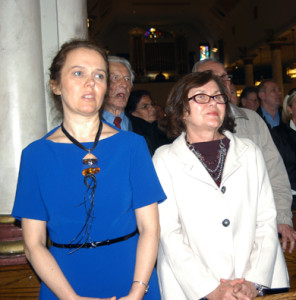 The parish school also opened in September, 1913, in a rented building with 300 students taught by the Sisters of the Holy Family of Nazareth. Students moved into their own school building by 1923.
During the Great Depression, many farm and factory workers lost their jobs, and parishioners provided mutual assistance and support. Word spread about this family of faith and it grew – as did the church building, which was widened in the mid-1940s. Two decades later, a convent opened for the Sisters of the Holy Family of Nazareth.
One of the greatest days in the church’s history came in September of 1969, when Archbishop Karol Wojtyla of Poland, the future Pope John Paul II, visited the parish.
New waves of Polish immigrants, many political refugees, arrived in the early 1980s. They started the parish’s Saturday Polish School to preserve the language and customs among the younger generation.
Education and propagation of the faith and culture through pilgrimages, vigils and cultural festivals was the focus under the pastorates of Msgr. Strynkowski and Msgr. Zendzian, who is completing his 13th year at the parish. Though his term as pastor was finished last year, Bishop DiMarzio allowed him to stay for the 100th anniversary of the parish where he was born and baptized.
In anticipation of the centenary, Msgr. Zendzian oversaw various upgrades, including a new roof and copper covering on the steeple. A new electrical system and air conditioning were installed. The church basement was remodeled and dedicated to Blessed John Paul II. A statue of the late pope was also installed on the parish grounds. 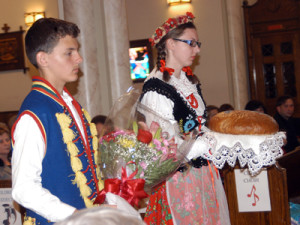 Strong Polish Population
The parish, much like the surrounding community, continues to boast a strong Polish population with 1,300 registered parishioners and families and at least 2,000 people attending seven weekend Masses, three in English and four in Polish. Each year, nearly 20 couples exchange wedding vows, and 100 baptisms take place in the church.
Though the parish school closed in 2005, around 600 elementary and high school students attend the parish’s Polish School on Saturdays.
“It’s like a second home,” shared Polish-born Malgorzata Baclawski, a parishioner for 14 years. “When I come here, I feel like I’m surrounded by positive energy.”
Like many parishioners, Baclawski is grateful to be able to raise her children in the faith and traditions of her homeland. Her daughter Caroline currently attends the Polish School, where she is learning Polish grammar, literature, history and geography.
Following Mass, the Polish School presented a program outlining the church history. Waldemar Rakowicz, principal, then offered a toast to the parish and led parishioners in singing Sto Lat. 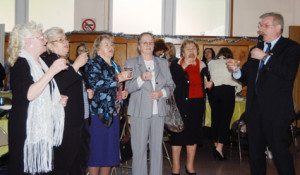 “Everything that we miss from Poland, we find here – culture and traditions like Corpus Christi, Easter and Christmas celebrations,” Rakowicz said.
His hope for the next 100 years is that the parish grows “bigger and stronger” in the hands of the next generation.
“These children,” he said, looking to the Polish School students, “we want them to take our place so we must educate them in their religion and in traditions, both American and Polish.” 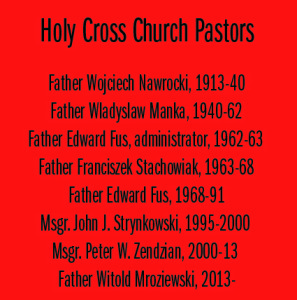 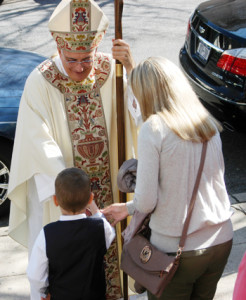