A treasure of biblical proportions is on display for the first time in New York City.

Hidden inside the New-York Historical Society, just steps from the lobby, is the Word of God.

The incredible collection of historic Bibles and religious texts is called ‘In God We Trust: Early Bible Printings from the David M. Rubenstein Americana Collection.’ It seeks to show that faith has always been the cornerstone of life in America.

He added that while the Bibles are in different languages, they do have one thing in common: They’re all original printings of their type.

On display is the first Bible printed in America dating back to the 1600s, just 40 years after the pilgrims stepped off the Mayflower.

“The first Bible printed in America is in Algonquinm, the language of the native Indian tribes,” said Ryan.

Each Bible tells a special story, one not necessarily found within their pages.

“People should see this to just appreciate the ways in which Bibles tell stories other than the stories that are in the Bible texts,” Ryan continued.

“These books, just by the virtue of them existing, tell a story. Their printing, their dissemination, who they’re made for, etcetera,” he said.

On view to the public are also pieces that helped write America’s story, like President Ulysses S. Grant’s original inauguration Bible, and the first translated by a woman.

“That is a nation of immigrants speaking many languages, but sharing a common set of values and commitments,” Ryan said regarding the diversity of the biblical texts.

‘In God We Trust’ will be on display until July 28th at the historical society on Central Park West and 77th street. 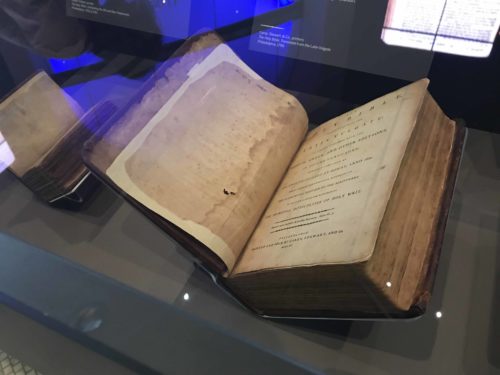