ROME (CNS) – Here is an explanation of some of the terms and practices related to the time between Pope Benedict XVI’s resignation at 8 p.m. on Feb. 28 and the election of a new pope.

Dioceses are also called sees. The Latin for “when the see is vacant” is “sede vacante.” When the vacant see is the Diocese of Rome, all major church decisions, such as new legislation or the appointment of bishops, stops until a new pope is elected. Only ordinary business and matters that cannot be postponed can be conducted by the College of Cardinals.

The period between popes is called an interregnum – between reigns – even though Pope Paul VI set aside many of the regal trappings of the papacy and references to a papal “reign” gradually fell into disuse. Pope Paul inaugurated his ministry in 1963 with a coronation, then set aside the papal tiara. It was the last time a pope wore the beehive-shaped tiara, a triple crown.

Cardinal Tarcisio Bertone, as camerlengo, or chamberlain of the Holy Roman Church, assisted by the vice chamberlain and a canonical adviser, is in charge of safeguarding the temporal goods of the Church and its temporal rights during the interregnum. The chamberlain heads a three-member commission that oversees physical preparations for the conclave and leads what is called a “particular congregation” – a group of three other cardinals chosen by lot – to conduct the minor day-to-day business of the Vatican until a new pope is elected.

Dean of the College of Cardinals

Cardinal Angelo Sodano is the current dean. As dean, he calls the cardinals to Rome and presides over their daily meetings before the conclave. Because Cardinal Sodano is over 80 and ineligible to enter the conclave, the dean’s duties inside the Sistine Chapel will be handled by Cardinal Giovanni Battista Re, the top-ranking cardinal-bishop of those under 80. Inside the chapel, Cardinal Re will administer the oath of secrecy and preside over the conclave. When a candidate achieves a two-thirds majority vote, the dean – in the name of the entire college – asks the candidate if he accepts the election and what name he will take.

Only cardinals under the age of 80 on the day the “sede vacante” begins can enter a conclave and vote for a pope. Even if he is retired from other Church posts, if a cardinal is under 80 he is considered an active cardinal for the purposes of the conclave. As of Feb. 28, there will be 117 cardinal-electors.

All cardinals who are able to go to Rome attend the general congregations, which are daily meetings in which the College of Cardinals prepares for a conclave, discusses the needs of the Church and handles more serious Church business that must be attended to between popes.

Cardinals over 80 may participate in these meetings, but they are not required to. General congregations end when the cardinals enter into conclave.

Between popes, the Church’s camerlengo and three other cardinals chosen by lot handle the day-to-day business of the Holy See in daily meetings called particular congregations. These continue while the cardinals are in conclave. Every three days, three new cardinals are chosen by lot to assist the camerlengo.

The Latin command, “all outside,” orders everyone who is not authorized to be in the Sistine Chapel during the conclave to leave before the conclave starts.

Cardinals take two oaths of secrecy: not to reveal to anyone anything directly or indirectly related to the election of the pope. The first is taken the first day a cardinal joins the general congregation; the second, at the start of the conclave. The few non-cardinals authorized to assist the cardinals while they are in conclave also take an oath of secrecy.

These are three cardinals, chosen by lot at the start of a conclave, to oversee the depositing of the marked, folded ballots for pope into an urn. They shake the urn, count the ballots to assure the number of votes and voters matches, then open each ballot and record and read aloud the name on it. They add the votes cast for each candidate to determine if a pope has been elected and handle the burning of the ballots and any notes taken by cardinals.

Three cardinals, chosen by lot at the start of a conclave, to oversee conclave balloting by any cardinal-electors who are too ill or infirm to sit through the conclave sessions in the Sistine Chapel. On each ballot, after depositing their votes in an urn, they go together to the sick cardinals with blank ballots and a locked box in which the completed ballots can be placed through a slit. They return to the conclave and deliver the votes.

Three cardinals, chosen by lot at the start of a conclave, to recount and verify each round of balloting for the election of a pope, whether a pope has been elected on that ballot. 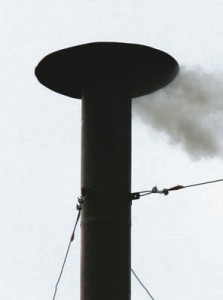 The traditional signal, from a chimney on the roof of the Sistine Chapel, whether a pope has been elected: Black smoke, no; white smoke, yes. The smoke is generated by burning conclave ballots and notes with chemicals to make the smoke the right color. To avoid any possible confusion, the cardinals decided to have white smoke accompanied by ringing bells.