On the eve of the feast of the Annunciation, pro-life advocates took to the streets of Jamaica to pray for the unborn outside an abortion clinic set to open Friday, March 30.
Choices Women’s Medical Center recently relocated from its Long Island City location to a new site on Jamaica Ave. and 147th Pl., where clinic executives have been quoted as saying they hope to provide 10,000 abortions a year.
Led by the Helpers of God’s Precious Infants, nearly 200 people prayed the rosary and sang hymns in English and Spanish as they stood outside the clinic’s closed metal gates last Saturday, March 24, following 7:30 a.m. Mass at Presentation B.V.M. Church, Jamaica. Organizers had expected the clinic to be up and running in time for the vigil. However, the opening was pushed back from early March to the end of the month.
Police officers from the 103rd Precinct accompanied the crowd, which was younger and larger than usual for the monthly vigils conducted by the Helpers in Brooklyn and Queens. Many teenagers, young adults and families with strollers and small children in tow brought vigor to the display of faith.
Msgr. Philip Reilly, founder and executive director of the Helpers, and Father Christopher O’Connor, pastor of Presentation B.V.M., took turns leading the Joyful, Sorrowful and Glorious Mysteries as the group maintained a peaceful presence behind metal barricades.
Besides local residents, the assembly included members of Presentation’s Holy Soldiers youth ministry and Jornada youth ministry; The Bridge to Life, Inc..; the Joint Parish Respect Life Committee of Queens; Jovenes Unidos Con Cristo from St. Martin of Tours, Bushwick; and over a dozen Catholic University and Fordham University students undergoing sidewalk-counseling training with Msgr. Reilly. 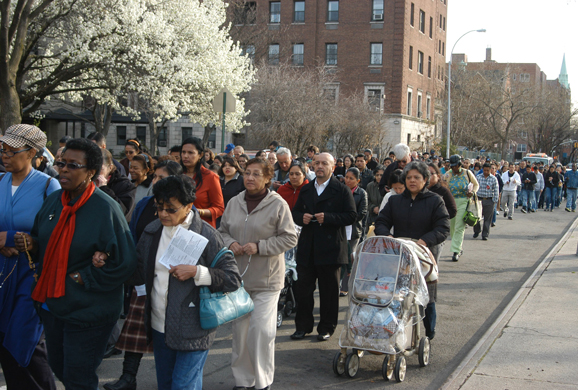 Community Coming Together
“It is really beautiful to see the community come together like this,” shared Mary Elizabeth Murphy, a senior at Catholic University.  “It’s good to see people all ages and backgrounds.”
Fordham graduate student Edwige Tia was moved by the reactions of onlookers, who watched from apartment windows and paused on street corners. Some were even taking pictures with cell phones.
“People seemed amazed and some even looked like they sympathized with us,” Tia said.
This was the first prayer vigil for Ric Crossfield, 16, who will be part of Presentation parish’s contingent at World Youth Day 2013 in Brazil.
“Initially I didn’t think there would be this many people. It’s good to see that so many people care and are willing to show their faith,” said Crossfield, a junior at Cathedral Prep Seminary, East Elmhurst. “Some people may not know the consequences of abortion or how wrong it is so it’s good we’re doing this to make the community aware.”
Prior to the vigil, Msgr. Reilly celebrated a bilingual Mass in English and Spanish at Presentation. Concelebrants included Fathers O’Connor; Josephjude Gannon, pastor, St. Gerard Majella, Hollis; Francis Colamaria, administrator, Holy Child Jesus, Richmond Hill; Abraham P. Mathew, St. Nicholas of Tolentine, Jamaica; James Rodriguez, parochial vicar, Most Precious Blood, L.I.C.; and John McCartney, associate pastor, Our Lady of Victory, Floral Park. Assisting on the altar were parish Deacon Jose Lizama and seminarians Mark Bristol and Peter Penton.
“Choices has killed at least a half million babies up to their seventh month,” Msgr. Reilly told the congregation in his homily.  “The unborn children are our brothers and sisters. The idea is to stand up and speak for them,” and pray for the conversion of those people “caught up in the culture of death.”
“It’s very important we don’t kill the future of this neighborhood,” he said, explaining that every person has the power, through his or her prayers and presence, to provide “a clear message that this is a community for life.”
Father O’Connor is working to spread that message and educate the community about the sanctity of life.  In addition to speaking out against abortion from the pulpit, he’s invited women to step into the pulpit to give testimony about motherhood and post-abortion syndrome at weekend Masses.
The parish recently hosted a seminar on the Theology of the Body and offers the Daughter of the King Series to promote chastity among young women.
Perhaps the most visible sign to the community is a large red banner, which was placed over the church’s front doors in the past few weeks. The pastor commissioned Diana Romero, youth minister, to create the bilingual sign quoting Jeremiah 1:5 and urging women to “Choose life, your mom did.”
“Today our prayers are not finished. They’ve just begun. … This is just a beginning at Presentation,” Father O’Connor said after the vigil. “We’re planning on joining with the Helpers to train sidewalk counselors and have a steady presence outside the clinic.”