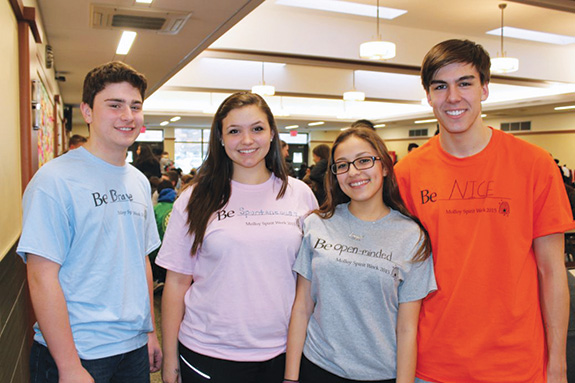 In an effort to celebrate the great tradition of school pride at Archbishop Molloy H.S. Briarwood, administrators and faculty founded “Spirit Week.”

“During Spirit Week you see everyone come together to celebrate our school,” said senior Janet Narain. “It’s a lot of fun because it really shows how much we all love Molloy.”

The goal is to spark student and faculty participation around the school by organizing contests, games and academic and athletic events that champion creativity, teamwork, volunteerism and charity.

“Beyond just having fun, we wanted to raise consciousness among our students as to why Molloy is a special place,” said Brother Thomas Schady, F.M.S., principal. “We believe we’re among the best schools in New York City, but with that belief comes a responsibility to lead and give back. In that sense we wanted to challenge our students to not only have fun, but to show their school spirit through charity and giving. That is at the heart of what makes Molloy special.”

Throughout the week, students submitted original artwork, presented their musical abilities in front of a packed theater during “Molloy Idol,” and dressed in Molloy gear from head to toe. An afternoon full of athletic events, billed as “Spirit Games,” included basketball, relay races, soccer and a tug of war. Those students participating in the games showed great enthusiasm, while many others filled the stands to show their school spirit by cheering on their friends.

Students and faculty wore colored shirts that spread awareness for several causes including green for literacy, pink for breast cancer, orange for the prevention of animal cruelty, gray for Parkinson’s disease and light blue for autism. The shirt designs also read “Be ______,” which prompted students to fill in the blank by writing their own positive word or idea.

“The service and giving opportunities that were offered during Spirit Week were a great way for the school to put its Marist Catholic spirit into action,” said Elizabeth Murdocca, director of student activities.

The school also participated in the Jeans for Teens campaign, which resulted in over 1,200 pairs of jeans collected for homeless individuals in need in just five days.

“I was pleasantly surprised by how our students responded to each activity,” said Richard Karsten, the school’s president. “They were excited and in full support of spreading awareness through their shirts as well as donating their clothing for people in need. That is what Spirit Week is all about.”