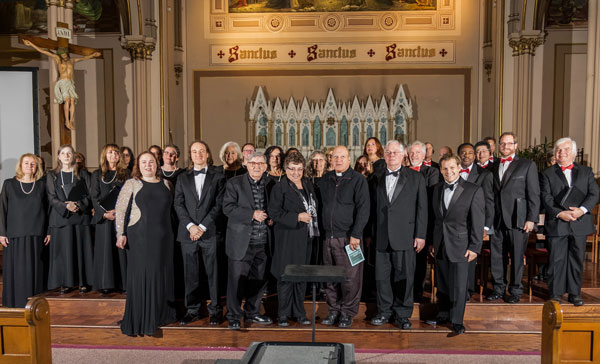 The Ukrainian Chorus Dumka of New York will perform a concert of Christmas carols in English and Ukrainian at St. Mark Church, Sheepshead Bay, this Saturday, Dec. 17 after the 5 p.m. Mass. Tickets are $20 for adults, $15 for students. Children under age 14 are admitted for free.

This week’s Tip of the Tablet TALK Top Hat goes to some people in Queens and Brooklyn who made the Thanksgiving holiday special for their neighbors in need.
The Msgr. Dillon Knights of Columbus Council No. 5872 in Whitestone, in cooperation with College Point’s St. Ambrose Council No. 1463, co-hosted a food drive for the needy.
Knights collected an amazing 750 pounds of food for local food pantries, $300 in donations for families and $350 to purchase holiday turkeys for the needy. These two councils have been hosting this charitable drive for the last two years.
And in Gravesend, Our Lady of Grace Church has good-hearted parishioners who helped feed a group of homeless men and women on Thanksgiving Day.
This effort included transportation, which was donated by Cadillac Bus Company, and coordinated by parishioners Mimi Camera and Tony Datilo. Some turkeys and trays of food were donated by A & S Pork Store.
More turkeys were donated by Ann Cianci and Fern Rossi, with food also coming from the Sister Jane Talbot Pastoral Ministry Office.
The project was spearheaded by Jaime McFarland.

Good news from the Sisters of St. Joseph, Brentwood, L.I.: On #GivingTuesday, they received nearly $4,000 in donations to help fund an upcoming convent renovation.

Still looking for something fun to do on Dec. 31?
Ring in the new year over a hot buffet dinner and dessert with Holy Name of Jesus parish, Park Slope, starting at 8 p.m.
Make some noise and enjoy a Champagne toast while wearing party hats and tiaras and music to take you from 2016 to 2017. Games, crafts and indoor basketball are available for children.
Tickets are $55 per adult and $15 per child. Free child ticket for every paid adult. Reserve seats by Dec. 28. Call 347-383-2179. 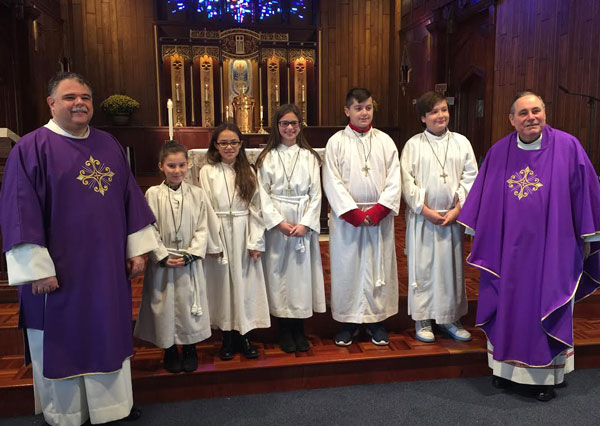 On the second Sunday of Advent at St. Francis of Assisi, Astoria, five boys and girls were installed as altar servers by Msgr. Ralph Maresca, pastor, far right, along with Deacon Nick Scarlatto, at left. Congratulations to the new servers: Allison, Giulia, Gianna, Denis and Andrew. (Photo courtesy of St. Francis of Assisi Church)